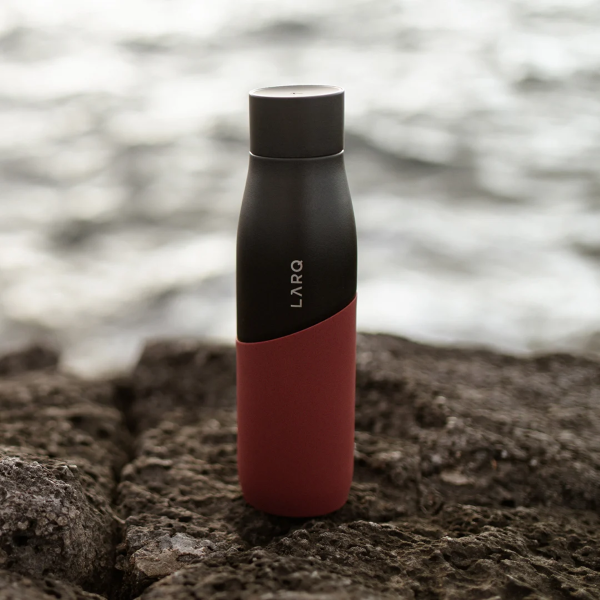 Let’s take a more detailed look at this self-cleansing water bottle and check everything that the LARQ Bottle Movement has to offer.

This smaller model was designed with the perfect size to make it fully portable, allowing users to carry it around with them without any uncomfortable weight whatsoever. Thanks to its ultra-lightweight, you can simply chuck it into your gym bag, take it on a day hike, or even on a small backpack on your backpack while you go on long afternoon walks with your dog. 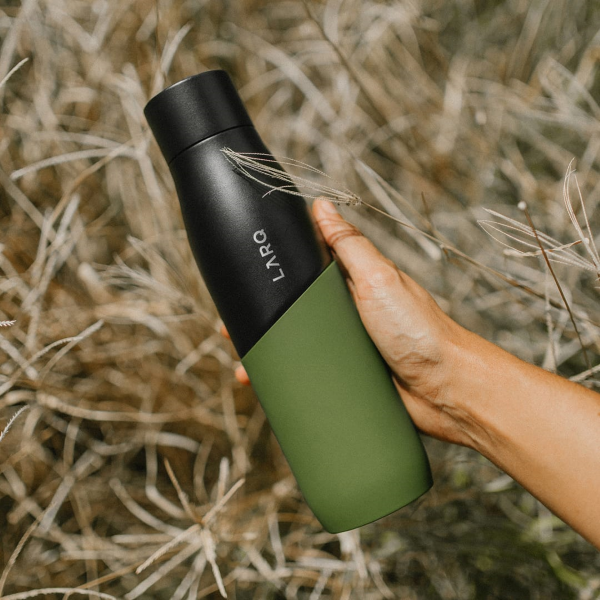 This smaller model of the LARQ Bottle Movement offers a total of 24 oz. (710 ml) of liquid capacity, which means that on average, you’ll only need around 3 to 6 refills per day to quench your thirst and fulfill your body’s hydration needs. Be aware that these numbers/values are based on the average recommended daily water intake.

Furthermore, since here at GadgetGram, we’re big fans of the color black, we’ve decided to go with the Black/Onyx color model/variation. 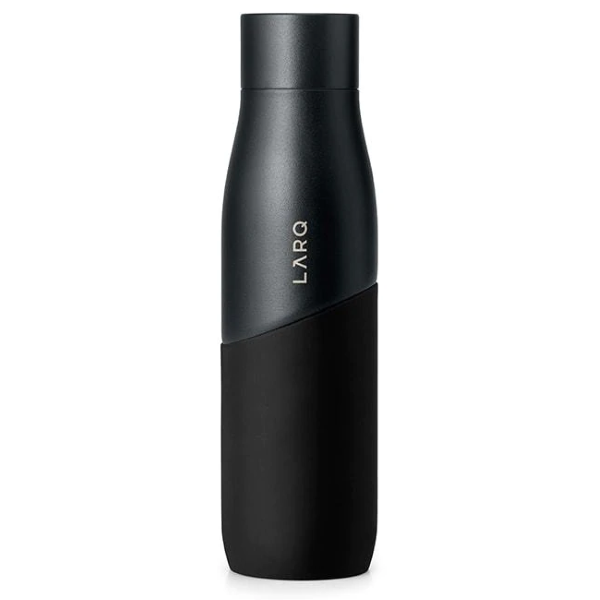 The entire unit features a very solid construction. However, it’s important to mention that while the LARQ Bottle Movement’s designed is based on its predecessor, the LARQ Bottle, there are a few differences between them.

While the original model (the LARQ Bottle) features a double-wall vacuum insulation that keeps your water hot for 12 hours and cold for 24 hours, as well as a two-tone proprietary powder coating and Red Dot award-winning design, this lighter-weight model (the LARQ Bottle Movement) was designed mostly with portability in mind.

As such, this 2nd model (the LARQ Bottle Movement) is basically a lighter weight bottle that only features a single-wall construction, contrarily to the double-walled insulation layers offer by the original model.

However, there’s nothing to worry about it, as you shouldn’t see its single-walled stainless-steel layer (which is made of BPA-free electropolished 18/8 stainless steel) as a disadvantage.

While this makes this specific 2nd model unsuitable for hot beverages, this still makes the unit much more portable than the original model, thus making it perfect for staying hydrated while backpacking or commuting, as well as perfect for your daily commute and office days, for any of your future outdoor adventures, for whenever you’re going to the gym, or pretty much for anything else that you enjoying doing.

Additionally, (the LARQ Bottle Movement also features an interchangeable premium food-grade silicone sleeve that protects the bottle from any accidental bumps and knicks.

As mentioned before, the LARQ Bottle Movement works in the exact same way that the original model did, and that’s by using the company’s patented UV-C technology to purify your water and bottle at the touch of a button. As such, this self-cleansing water bottle can quickly purify the water inside it in just a mere 60 seconds.

By using its built-in UV-C LED light that can successfully eliminate up to 99.9999% of E.coli from both your water as well as the bottle itself.

The LARQ Bottle Movement was mainly designed with utility and portability in mind, making it as “Adventure-Ready” as you’d hope for, which ultimately allows you to purify water while you’re on-the-go. This means that no matter where you end up next, you can always have pure drinkable water, anywhere and at any time.

Lastly, the bottle intelligently and automatically turns itself On every 2 hours to purify both the water you’ve got stored inside it as well as its inner single-walled stainless steel layer. Thanks to its reliable UV-C light technology, the bottle can fully eradicate any biological contaminants by destroying their DNA, and that’s ultimately how the bottle can keep both your water and the bottle itself fresh for long periods of time.

It’s also worth to mention that despite the few differences between the LARQ Bottle Movement and the original model, both version use the exact same cap, which is where the bottle’s proprietary UV-C LED technology comes built into. 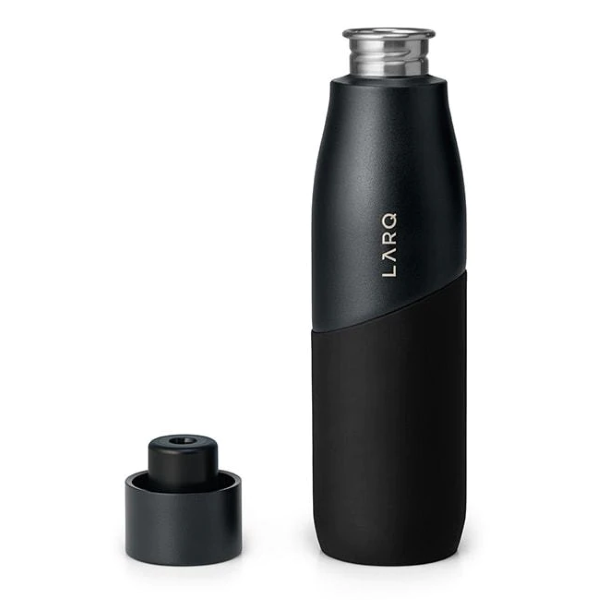 The only few differences between both version are a slight change in the design, as well as in water capacity, weight, and construction of the bottles (as mentioned before)

The LARQ Bottle Movement can be used in two different UV-Light Water-Purifying Modes, and those are the Normal Mode and the Adventure Mode.

The Normal Mode is a 1 minute cleaning cycle that delivers exactly 12 mJ/cm^2 of UVC (Ultraviolet germicidal irradiation or simply UV Light) to the water and the inner surface of the bottle. By tapping the button located on the bottle’s cap once you can activate this Normal Mode cycle. This Normal Mode is the perfect choice for daily use, especially if your water comes from a trustworthy source.

The bottle’s Adventure Mode is a UV-light water-purifying cycle that lasts a total of 3 minutes. This mode can be easily activated by double tapping the same button on the bottle’s cap.

The Adventure Mode is a great choice for any times that you aren’t completely sure about the quality of your water as well as for whenever you just want some extra peace of mind, so that you can feel safer drinking that same water from a less reliable water source.

The LARQ Bottle Movement also comes equipped with a built-in rechargeable Lithium-Polymer battery that can last you around 1-2 months when using the bottle on Normal Mode, and that value is based on 3-4 cycles a day.

On the other hand, when using the bottle Adventure Mode, the bottle’s internal battery will last you around 10-12 days.

The bottle also comes packed with a small setup “Low-Battery” LED indicator lights that will always inform you about when it’s time to once again recharge the bottle. 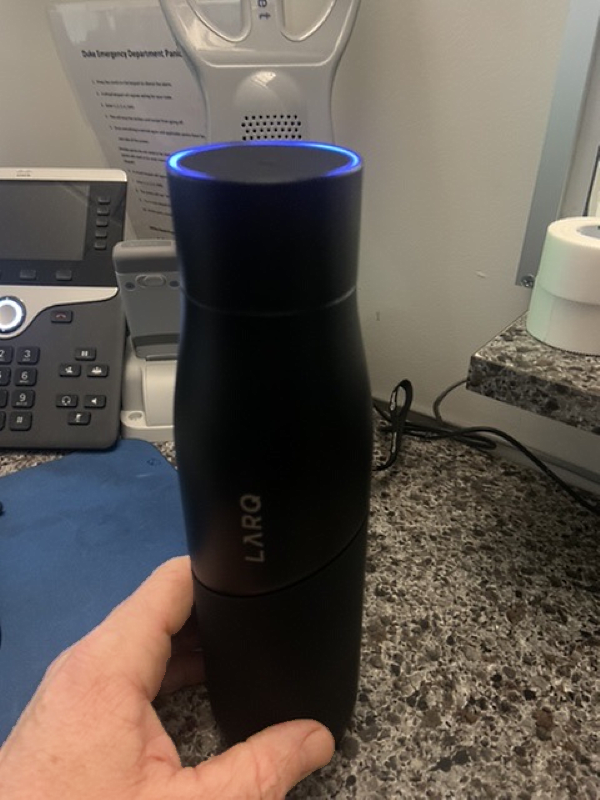 Recharging the bottle is also as easy as you’d want it to be. There’s a Micro-USB port at the top of the cap (right at the back side of the bottle). 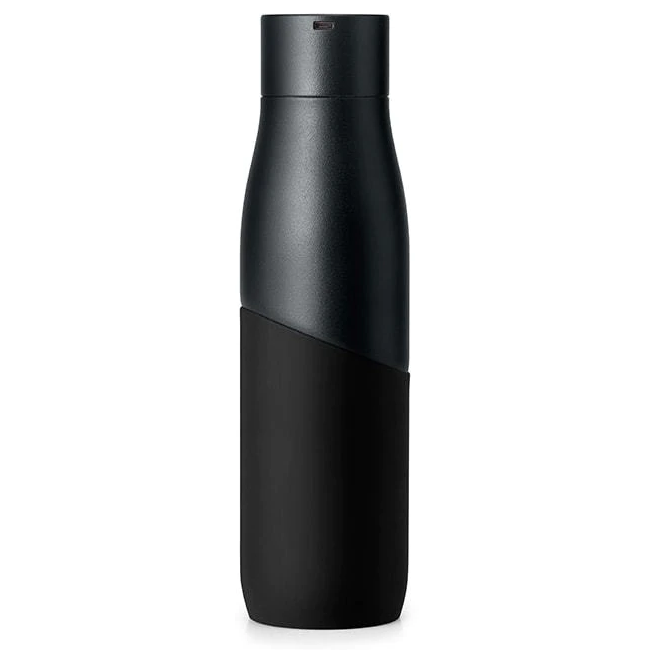 By connecting its included USB to Micro-USB Charging Cable to both the bottle and a USB-adapter, you can quickly recharge the bottle in just a few hours.

Inside their package users will find: their LARQ Bottle Movement, one included USB to MicroUSB Charging Cable, and a Quick Start Guide. 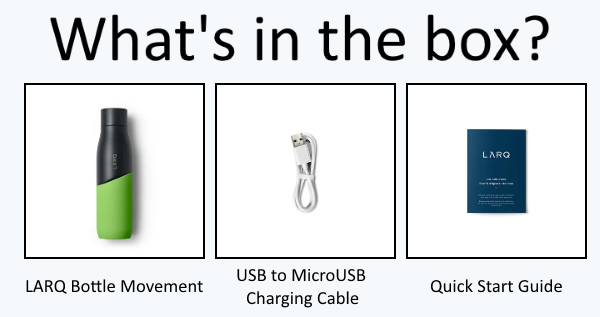 The LARQ Bottle Movement is a lightweight reusable self-cleansing water bottle that uses a built-in UV-C LED light that can successfully eliminate up to 99.9999% of E.coli from both your water and the bottle itself.

This self-cleansing water bottle is designed for everyday use, and it’s perfect for pretty much anything you can think of, starting with your daily commute, a fast quick workout at the gym, or even a weekend spent outdoors exploring Mother Nature.

If you’re interested in buying this ultra-lightweight self-cleansing water bottle, each unit is currently going for just $78 for the smaller model (710ml/24 oz. of liquid capacity), or a slightly higher value of just $98 (just $20 extra) if you decide to go for the bigger version (710ml/32 oz. of liquid capacity).

You can order both bottle variations online, directly from LARQ’s official shopping page, which you can access via this link. 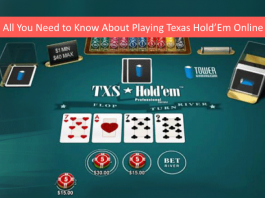 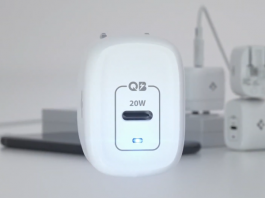 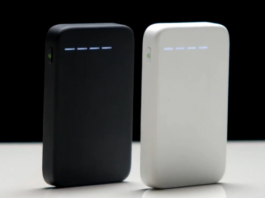