This one is perfect for business people that tend to spend a lot (or most) of their time traveling while needing a better audio solution for their on-the-go business conferences. Sometimes, business workers that are traveling just tend to carry their laptop with them. Furthermore, while one single person might have an easier time turning on their laptop, logging into a telecommunications voice and video App, and having an improvised online business meeting right at that moment, it would be harder for a small group of traveling business workers to do this with a single laptop. That’s because laptops are not equipped with the best audio speakers and microphones to allow multiple people at once to surround that single laptop and easily understand what’s being said during a business meeting. That’s exactly when having a gadget like the Anker PowerConf Bluetooth Speakerphone comes in handy.

Not only does this ingenious and compact audio device come equipped with a 6-microphone setup to accurately pick-up up to 8 different people’s voices around the room in a 360º radius but it also runs a custom DSP Algorithm that enhances voice pickup with real-time echo cancellation, de-reverberation, and ambient noise suppression.

Additionally, this state-of-the-art audio solution for business meetings also optimizes the voices on the other end to allow users to hear them clearer, while also automatically balancing the sound of its users’ voices to make up for differences in volume and people’s distance from the speakerphone.

This not only makes this gadget perfect for business workers that spend a lot of their time on-the-go, but it’s also a great audio solution to be used by anyone that doesn’t want to spend their time connecting their laptop to the company’s office speakers all the time before their business meetings start.

Starting with the unit’s design, the Anker PowerConf Bluetooth Speakerphone features a very sleek, compact, and lightweight design, meaning that its size makes it the perfect audio enhancement solution to take with you on business trips.

The unit measures exactly 4.88 inches long by 4.83 inches wide by 1.17 inches tall and weighs just a measly 12 oz, which basically means that transporting it is never a hassle.

The unit is built with a nice metal construction, which actually makes it quite durable, and even comes equipped with a sturdy and durable rubber base that prevents it from sliding around when placed on smooth surfaces (tables, etc.). 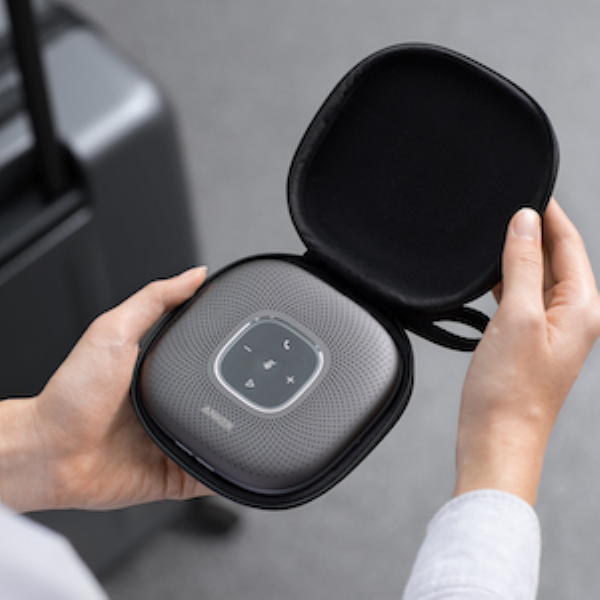 This compact portable speakerphone even comes with its very own lightweight and compact travel case, which can be used to carry and protect the PowerConf while you’re on business trips or even for when you’re going back to your office in a busy morning or leaving it after a long day of work.

Moving on to the device’s interface, first of all, the speakerphone features a very clean and simple interface that’s very easy-to-understand and intuitive to use. 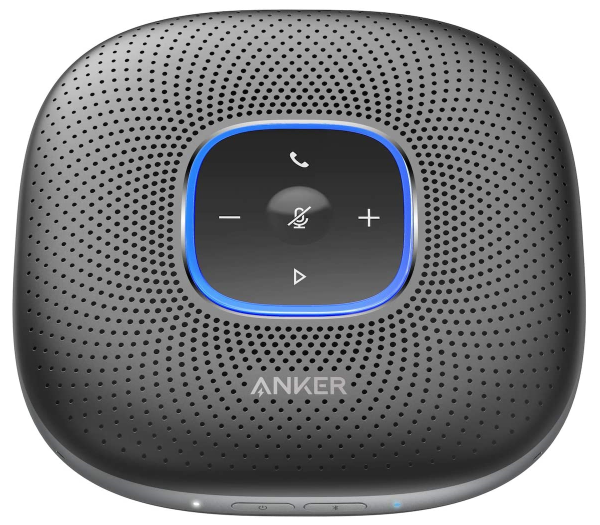 Lastly, at the back of the unit, going from left to right, we have a USB-A port, a AUX Output Port (for 3.5 mm Audio Jacks), and a USB-C Port (used to recharge the unit’s internal battery and/or to connect it to a computer).

Whenever you turn On the device, a green light indicator will be highlighted around the unit’s entire LED setup, which is located around its central control panel. 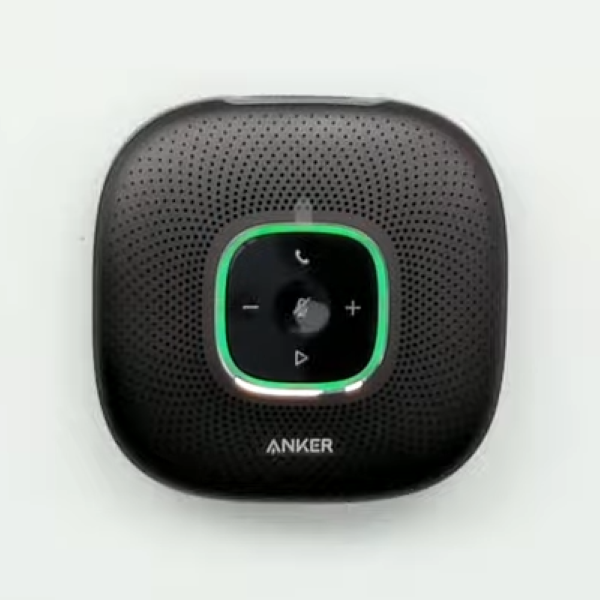 Now, let’s take a look at the unit’s Audio Specs, as well as see exactly what type of Audio Quality this speakerphone has to offer.

The Anker PowerConf Bluetooth Speakerphone comes equipped with one (x1) 1.75” 3W THD 1% Full-Range Audio Driver that can offer its users a really nice (and I really mean very, very nice) audio quality. Who ever you’re speaking with, the voice (or voices) from the people on the other side are always reproduced with crystal-clear perfection, no matter if they’re are sitting at a coffee shop, at the airport, or even on a busy office room.

That’s mainly thanks to the speakerphone’s Voice Optimization feature, which helps the device to optimize the voices on the other end to enable you to hear them in a more clear fashion.

As mentioned earlier, the unit also comes equipped with a 6-Microphone Setup (all Omni-Directional Mics). These six (x6) microphones are arranged around the four (x4) corners and the middle of the two sides (x2) of the unit, and as such, they’re displayed in a 360° array to more easily pick up voices from anywhere within a big room. This allows the speakerphone to have a perfect and full 360° coverage in huddle rooms, allowing the device to ultimately capture up to 8 people per business call/conference. 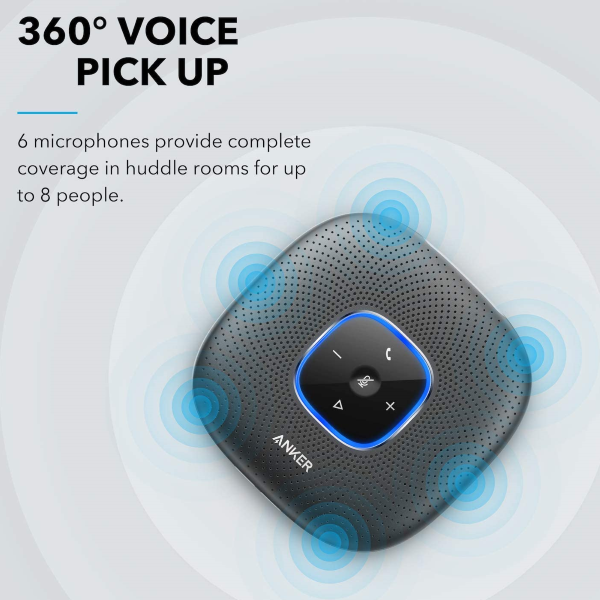 Depending on what direction you’re facing the speakerphone, as soon as you talk to its 6-microphone-array, the device will cleverly identify from which of its four sides your speaking from, and it will then highlight its LED panel on that specific side. 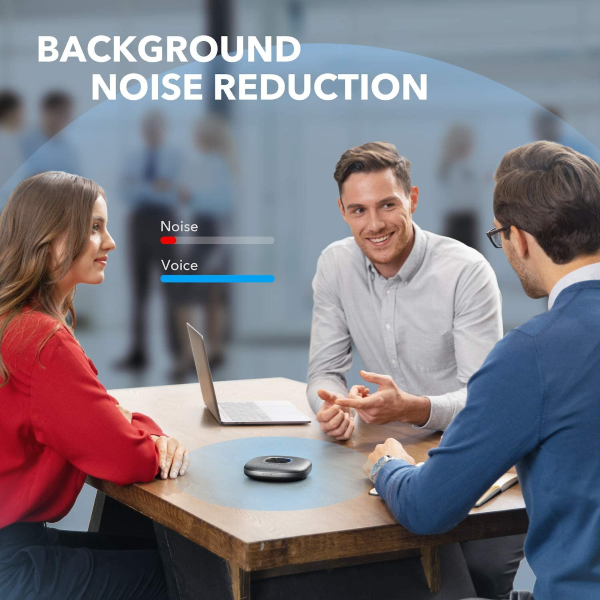 The speakerphone also constantly works together with a custom DSP Algorithm that offers real-time echo cancellation up to 70 dB, as well as audio de-reverberation. That same DSP Algorithm also allows the speakerphone to reduce background noises by 20db in order to ensure that your voice is picked-up without any distracting noises. 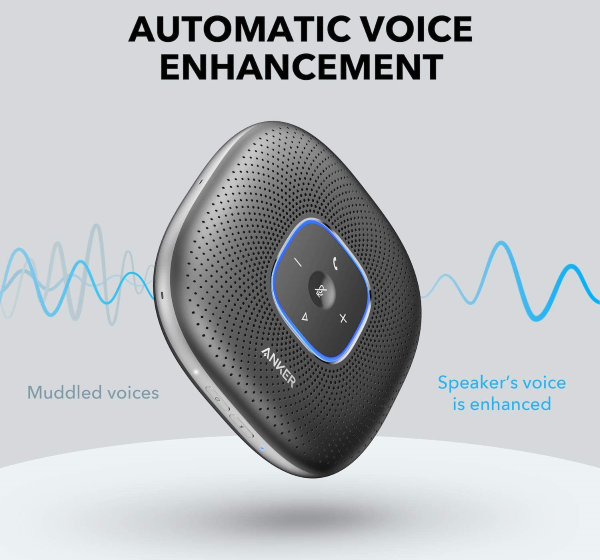 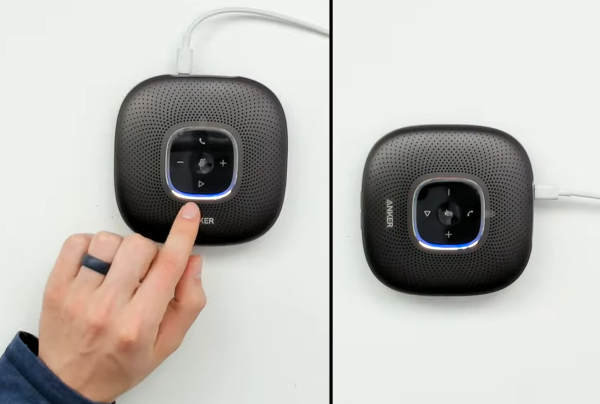 The Anker PowerConf Bluetooth Speakerphone offers you two different connectivity options. You can either use its Bluetooth Pairing Button to connect it wirelessly to any Bluetooth-enabled devices (like your Smartphone for example, via Bluetooth 5.0) or connect it to a PC (Windows 7, 8, 10, and macOS) via its USB-C Connection Port with its included USB-C Cable (and there’s no need to install any drivers). 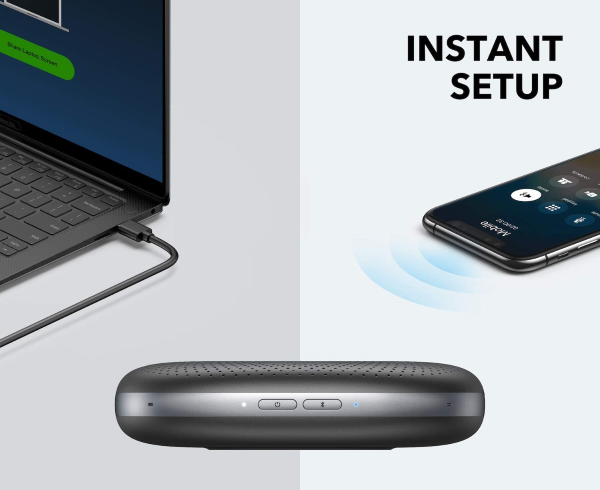 Whether you decide to connect the speakerphone to your devices via Bluetooth or via a USB-C Cable, the device offers you an instant setup.

Thanks to its two connectivity options (Bluetooth 5.0 and USB-C), the PowerConf Bluetooth Speakerphone is compatible with most devices (Smartphones and Computers that run Windows 7, 8, 10, and macOS), which also makes it compatible all popular online conferencing services. 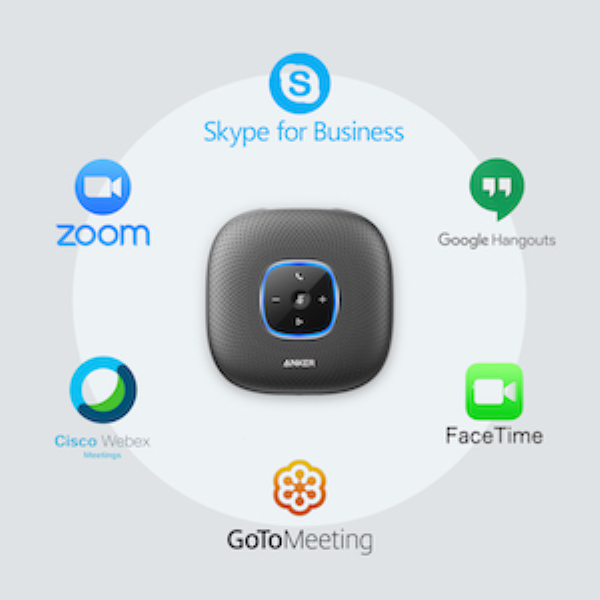 This ultimately brings you a Universal Compatibility to use most of the leading online conferencing services such as Skype, Google Hangout, Facetime, Zoom, WebEx, GotoMeeting, Chromebox, etc.

Lastly, the speakerphone also comes equipped with a powerful built-in 6700mAh rechargeable battery that can offer up to 24 hours of total call time per full battery charge. 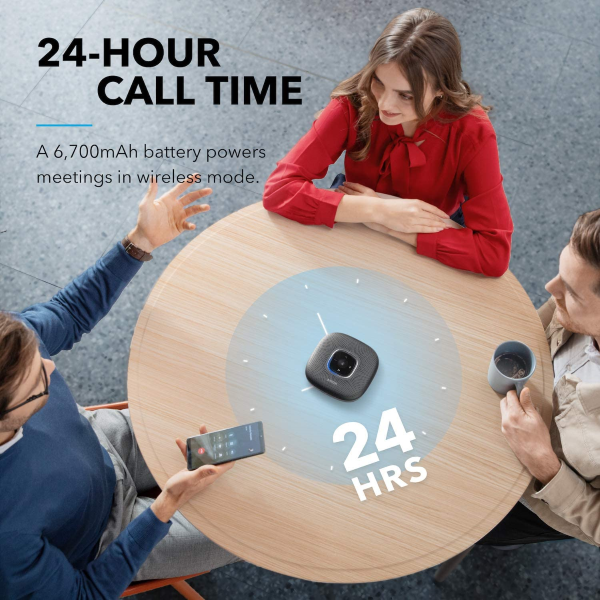 Recharging the device is also as easy as you’d want it to be, as all that you have to do is connect its included USB-C Charging Cable to its USB-C Port and connect the other end to either a computer or a USB Charging Adapter. 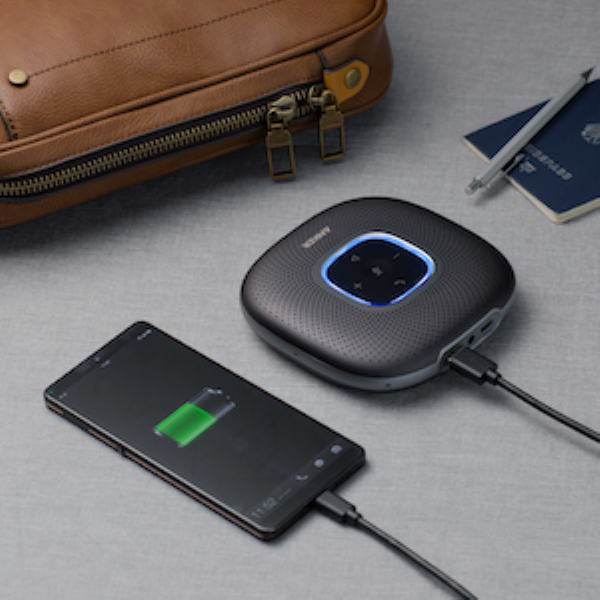 That’s a great feature for anytime that you need a quick power boost for your devices while you’re on-the-go.

Inside their package users will find: their Anker PowerConf Bluetooth Speakerphone, which comes inside its included Travel Case, and one (x1) included USB-C Cable that can be used to recharge the unit and/or connect it to a PC.

The Anker PowerConf Bluetooth Speakerphone is a portable and powerful audio device that provides business workers on-the-go with a great audio solution for their online conferences and business meetings while they’re traveling.

This Bluetooth Speakerphone offers crystal clear audio for any business meetings. It can perfectly capture up to 8 different people’s voices from around a room in a complete 360º radius while simultaneously enhancing voice pickup with real-time echo cancellation and balancing the sound of its users’ voices.

It also ensures de-reverberation for its captured audio and runs a ambient noise suppression algorithm, all that while also optimizing the voices on the other end.

If you’re interested in buying the Anker PowerConf Bluetooth Speakerphone, each unit is currently going for $100. You can order yours online right now, directly from Anker’s official shopping page, which you can access via this link.