This one is for any homeowner that’s looking to pretty much start upgrading their smart home and get the very basics of smart home controls. So, if any of your house rooms includes a ceiling fan and light combo (a ceiling fan with a built-in light / lights), then the Treatlife Smart Ceiling Fan Control and Light Dimmer Switch might be exactly what you need to change the way you control your room’s ceiling fan and lightning from the standard switch clicking straight up to voice controls.

Treatlife is a company that’s extremely experienced with developing smart lighting systems, and as such, the company is constantly exploring for new ways of simultaneously making your living space more peaceful, energy-efficient, and intelligent.

That’s exactly what the company’s Treatlife Smart Ceiling Fan Control and Light Dimmer Switch aims to deliver, a smart, easier and more relaxing method of controlling both your ceiling fan and its lights so that you can ultimately make it more intelligent as well as more energy-efficient.

Thanks to it, you can forget about having to reach up to your ceiling fan’s pull chains just to turn it On or Off and ultimately have an easier time controlling your ceiling fan as you should be able to do in 2020.

Now, let’s take a more detailed look at this Smart Ceiling Fan Control and Light Dimmer Switch and check what its all about.

As the product’s name suggests, the Treatlife Smart Ceiling Fan Control and Light Dimmer Switch was designed to do exactly what it states. This is a small smart switch that you can install in any division within your home to control both a ceiling fan and its included lights in a much easier fashion than having to always walk up to a standard ceiling fan switch controller and interacting with it 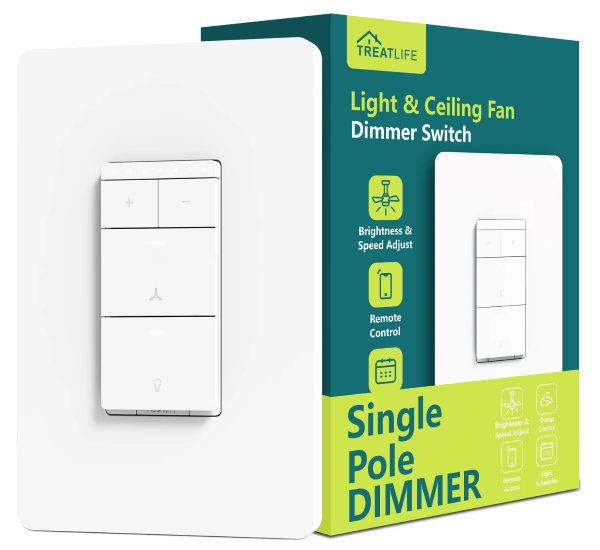 This smart switch brings you both Fan Speed Controls as well as Smart Brightness features, which means that it can be used to adjust both your fan’s speed as well as its built-in lights’ brightness (respectively).

As such, this smart switch provides its users with four different fan speeds, as well as a smooth, flicker-free dimming control / brightness control (which can be set between 10%-100% brightness level) for an increased comfort within your Smart Home. 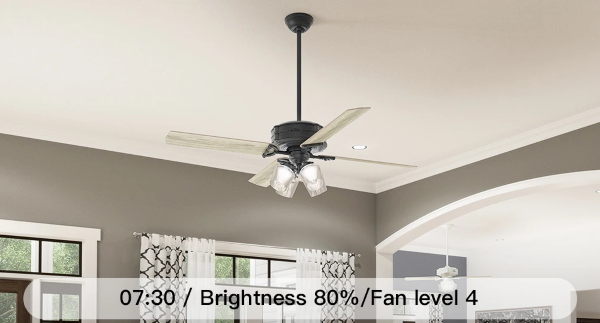 However, users can also adjust their ceiling fan’s speed and dim its built-in lights from anywhere within their home via their Smartphone by using the Treatlife Smart Ceiling Switch’s proprietary Smartphone Companion App (which is called the Smart Life App – discussed at the very end of the article).

There’s also a gentle On & Off Lighting feature for a comfortable visual effect.

Now, moving on to the Treatlife Smart Switch’s interface, this smart switch features a very simple and easy-to-understand control panel, which makes it very intuitive to use.

Starting from the top, at the left we have a Minus Button (-) that allows users to “Decrease” both their ceiling fan’s speed as well as its built-in lights’ brightness level. Contrarily to that, the top right side of the control panel features the exact opposite button, a Plus Button (+), which allows users to “Increase” both their ceiling fan’s speed and its built-in lights’ brightness level. 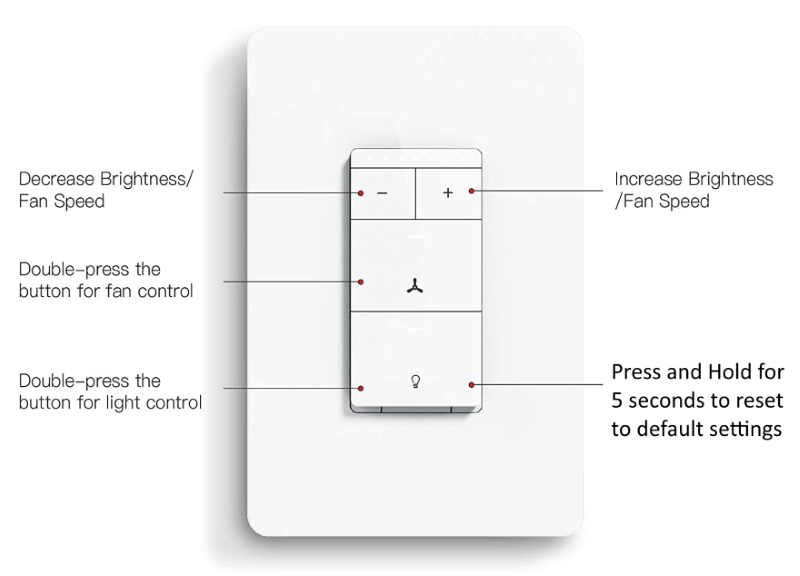 Then, right at the middle of the Treatlife Smart Switch’s control panel we have a large Fan Control Button (marked with a fan symbol), which allows users to control their ceiling fan’s speed with the previously mentioned Minus Button (-) and Plus Button (+) after Double-Pressing the Fan Control Button.

Lastly, to reset the switch completely or initiate its default configuration, all you have to do is press and hold the Treatlife Smart Switch’s Light Control Button (found at the bottom of its control panel) for exactly 5s, which will then have its Wi-Fi light indicator blinking with a Red light quickly (twice in one second). 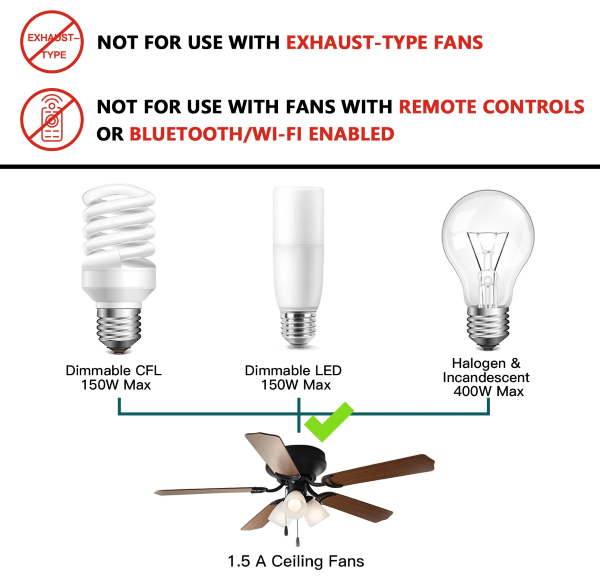 The same goes for any fans that have non-dimmable built-in lights (meaning lights that can’t have their brightness adjusted).

Furthermore, as the Treatlife Smart Switch requires separate wires for controlling both your ceiling fan and its light (or lights), if your house was built or remodeled before the mid-80’s, then your home probably doesn’t feature neutral wiring, which means that you’ll most likely not be able to install this Smart Switch within your home.

It’s also important to mention that the Treatlife Smart Switch can also never be used as a 3-way switch or as a multi-switch, as this Smart Switch was designed to work as a single-pole use only (instead of working as a 3-way Smart Switch System). 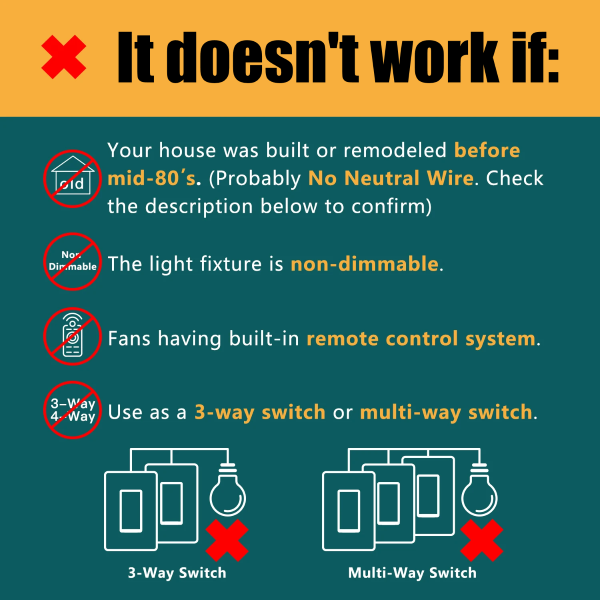 Lastly, the Treatlife Smart Ceiling Fan Control and Light Dimmer Switch features a Max Ceiling Fan Load of 1.5A (for its 4-different Fan Speeds) and a Max Light Load of 150W (for dimmable LED/CFL lights) or up to 300W (specifically for incandescent bulbs).

Installing the system is also quite easy, as the Treatlife Smart Switch features a very easy installation.

However, be aware that, as mentioned above, neutral wiring is indeed required, so, remember to confirm that the wiring in your home is compatible with this Smart Switch before purchasing it, as older homes might not have neutral wires.

It’s also important to remind you once again that this Smart Switch requires separate wires for your ceiling fan and its built-in lights in order to actually work.

Nevertheless, there’s a few nice things to point out. For example, no Hub is needed during the Smart Switch’s installation, and the same goes for using a canopy module, which is also not require in order to install the system and/or make it work.

After installing it, you’ll obviously want to connect the Smart Switch to your home network, but be aware that the Treatlife Smart Switch only supports 2.4G Wi-Fi (and not 5G). 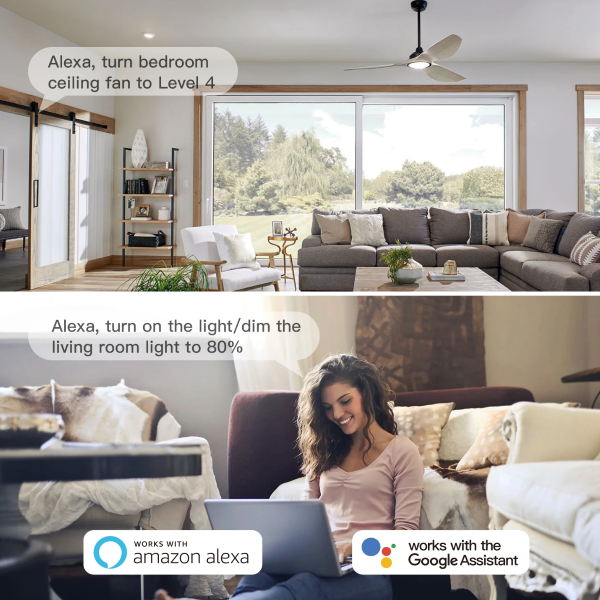 Thanks to that awesome Smart Home feature users are offered hands-free voice controls to very conveniently control the light and fan with one simple voice command. This basically means that you won’t ever again have to pull your ceiling fan’s pull chains to control it.

This is a perfect feature for any of those times when your hands are full or for whenever you’re entering a dark room and you don’t want to guess exactly where your ceiling fan’s pull chains are.

As mentioned before, users can also use the Treatlife Smart Switch’s proprietary Smartphone Companion App to control the Smart Switch, and the App is simply called the Smart Life App.

The Smart Life App is available to download for free for both iOS and Android devices.

By using the Smart Life App in any of your devices (Smartphone, tablet, etc.) you can conveniently control both your ceiling fan’s speed and its built-in lights’ brightness level.

The App also allows users to create schedules that should be based on their daily routines. 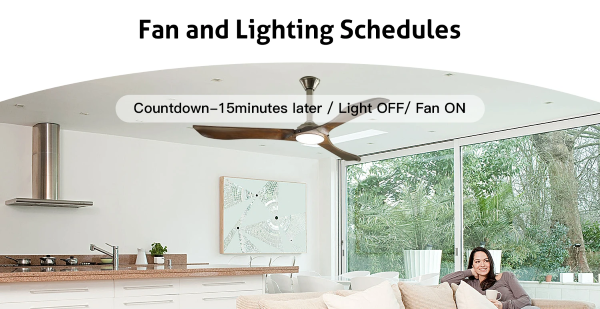 This ultimately allows you to automatically turn both your ceiling fan and its built-in light(s) On/Off at your own chosen specific times, with whatever preset fan-speed and light-brightness you see fit.

The same goes for using schedules to set your ceiling fan and its built-in light(s) to turn On and Off randomly, which is a great feature to have whenever you are on vacation, ultimately allowing you to trick potential intruders.

Lastly, the Smartphone App also allows home owners to share the dimmer switches with all of their family members so that everyone in the family can conveniently control the ceiling fan’s speed and its built-in lights’ brightness level whenever the main user (the admin) is not at home.

With this Treatlife Smart Switch you can ultimately make your ceiling fan more intelligent and more energy efficient.

Users can conveniently use Voice Controls via Amazon Alexa or the Google Assistant to control the Smart Switch.

Lastly, via its dedicated Smartphone App you can easily set schedules with preset fan speed and light brightness levels.

If you’re interested in buying this 2-in-1 Smart Switch for a ceiling-fan with built-in lights, each unit will cost you just $80. You can order yours online right now, directly from Treatlife’s official shopping page, which you can access by clicking here.

The BORA Centipede CK6S Workstand and CK22T Workbench Table Top make the ultimate heavy-duty workstation, which is fast to set up, stable and sturdy. While the BORA Centipede CK6S Workstand can support up to 2,500 lbs. of weight, the BORA CK22T Workbench Table Top can support a similar heavy weight load that can go up to 2,000 lbs., and this ultra-durable workbench also comes with plenty of dog holes, you can build just about anything on your Centipede Tabletop. Overall, the combination of this Workstand and Workbench Table Top provides you with the most flexible DYI workstation solution, making it perfect for your own personal (or business) workshop, for your workspace, or ultimately, for any job sites of construction work projects.
Read more
Home Gadgets

The VIZIO OLED65-H1 is a 65” 4K HDR Smart TV that features ultra-vivid color tones from up to a billion colors, as well as great shadows and brightness levels, all coming with extreme details in a 4K Ultra HD quality. With this high-end Smart TV you can easily improve your viewing experience for your favorite content, as you’re guaranteed to get a breathtaking picture-quality for any of your favorite streaming services, including Netflix, Hulu, Amazon Prime Video, and more. Furthermore, with support to HDR Gaming at 120fps, the TV's built-in eARC port makes this Smart OLED TV very "Gaming-friendly”. All that makes the VIZIO OLED65-H1 the perfect entertainment centerpiece for any family that’s enthusiastic about their Smart Home.
Read more
Home Gadgets