Having a portable generator around can be quite handy, as one of these ingenious electricity delivery devices can ultimately bring you a lot of benefits. That includes staying comfortable and prepared during any emergencies, both outdoors as well as indoors, including situations like power outages for example, where a generator lets you easily keep a campsite’s lights on or some of the electronics in your home (like a heater or a air conditioner) working at a reasonable power efficiency, even during a blackout. Since generators are simple and easy-to-use power delivery gadgets that can offer other devices a quick and automatic supply of power, they allow homeowners to operate the electric-powered devices within their homes in an easy manner during any unexpected emergency. That includes supplying power to heating and cooling systems, televisions, computers, and many other appliances, which ultimately allows homeowners to maintain both reasonable comfort and safety levels at any time. This brings us to the Generac iQ2000 Inverter Generator.

The brand-new Generac iQ2000 Inverter Generator is a portable and super-quiet gas-powered generator that allows any homeowner to bring a trustworthy supply of power with them at all times, no matter where life takes them next. Not only is the Generac iQ2000 ultra-quiet, but it is also CARB Compliant and even quite easy to set up.

From tailgating parties to camping trips and beyond, packing one of these portable generators on any of your future endeavors would be a really smart move. When considering its value, this generator would be a great purchase for any homeowner as well as any outdoors enthusiast, especially when its coming from a brand like Generac, which is a very trustworhty manufacturer of home backup generators that has been around for a really long time.

Now, let’s have a more detailed look at the Generac iQ2000 Inverter Generator and check everything that this new generator model has to offer. 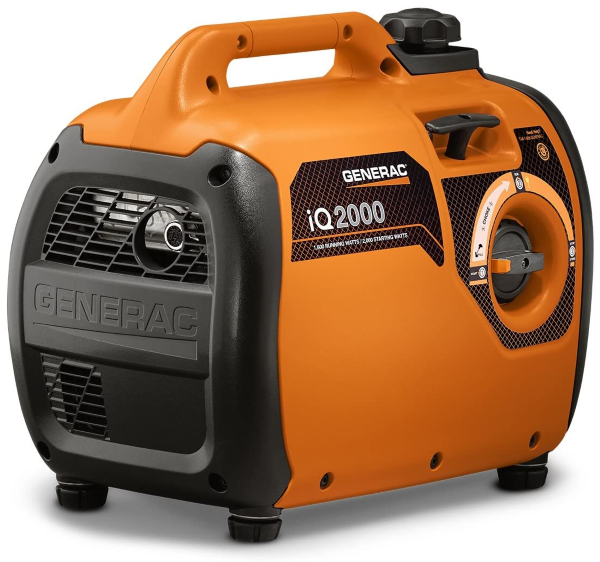 The entire unit features a very compact design that’s focused on portability and even comes equipped with a built-in handle that makes carrying the generator around a very easy task. There are also four (x4) highly-durable foot-stands (one at each corner) that keep the unit nice and stable (stationary) on any surface (and that also goes for slightly uneven ground). 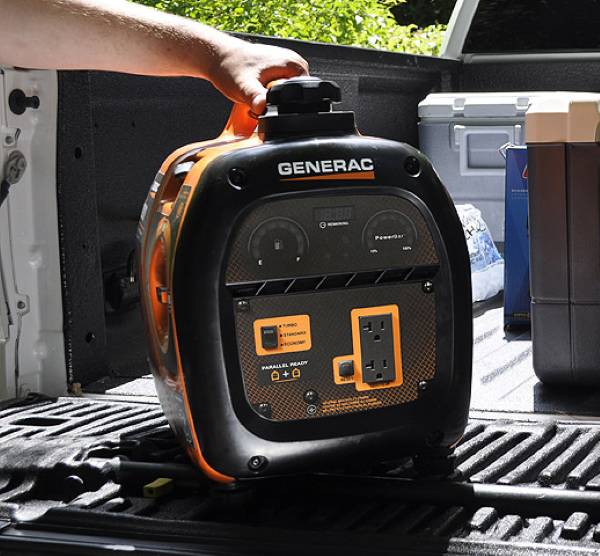 This generator is powered by Generac’s very own OHV Engine, which can deliver a long life of reliable power. This is a 80cc Displacement OHV Engine that features variable RPMs (more on that right ahead).

It’s also important to note that the Generac iQ2000 uses a different type of alternator than the ones found on standard generators. As such, this generator comes equipped with its own digital inverter module, which is responsible for converting the raw power produced from DC to AC power. It runs noticeably quieter than the Honda EU2000i Inverter Generator with electric start and has plenty of power to power any reasonably low-power-consumption electric device.

Furthermore, since the generator’s OHV Engine features variable RPMs, the generator’s engine’s speed will vary depending on your electrical demands, and thanks to that, this generator can ultimately and significantly reduce the noise levels when compared to other generator brands on the market. 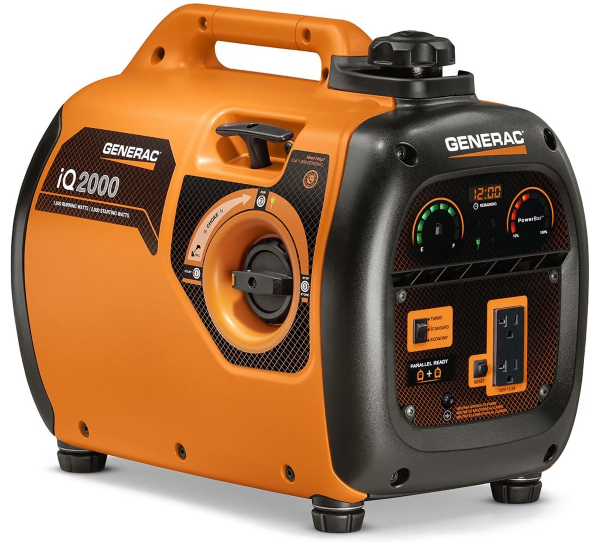 Lastly, the generator’s engine features a Maximum Fuel Capacity of 1.06 Gallons (4.01 Ltrs) with a Full Load Fuel Consumption of around 2.85 gallons per hour.

It’s recommended by the company itself (Generac) that you only use 10W-30 Oil Type (SAE 30) with this generator. Whenever you want to lubricate it, remember to just splash it with a bit of oil instead of pouring oil into it.

Overall, this is a pretty nice generator for camping in parks or campsites, for tailgating events, as well as to use for backyard parties or even for home low power needs if the power goes out.

Keep in mind that this particular inverter generator will probably only run a few camping lights, fans, portable speaker units (at backyard / camping parties), and maybe one refrigerator at one time (per full fuel capacity). Your manual will show you an estimated wattage requirement for each and every accessory and the generator’s load meter (located within its Control Panel / Interface) will tell you how much capacity you have as you keep adding these. 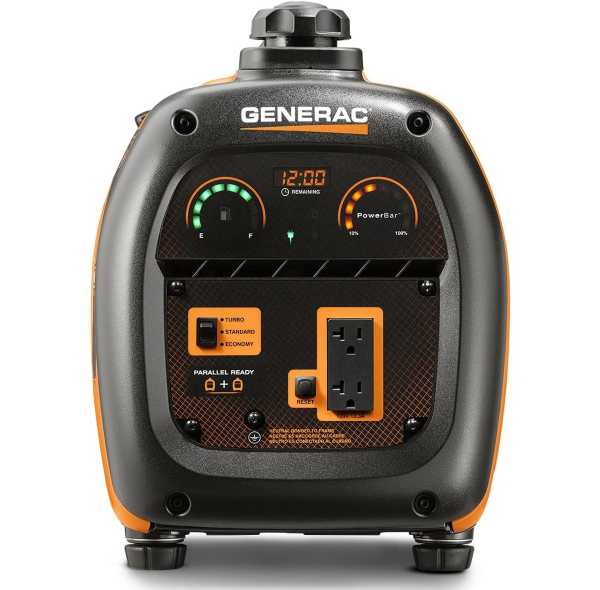 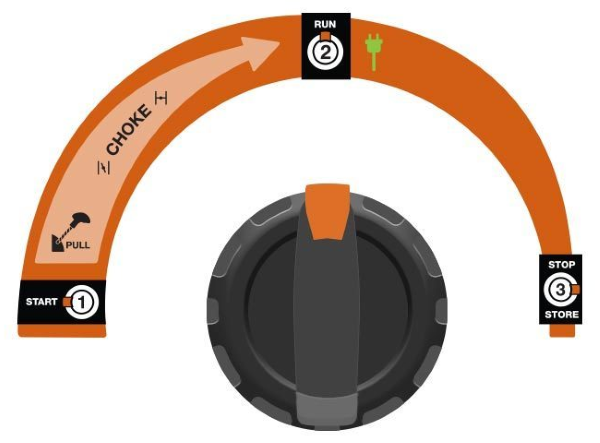 Moving on to the unit’s main Control Panel. Starting from the unit’s top left and slowly going to the right, there’s a electronic Fuel Gauge, a Remaining Run Time Digital Display and a PowerBar Power Dial. 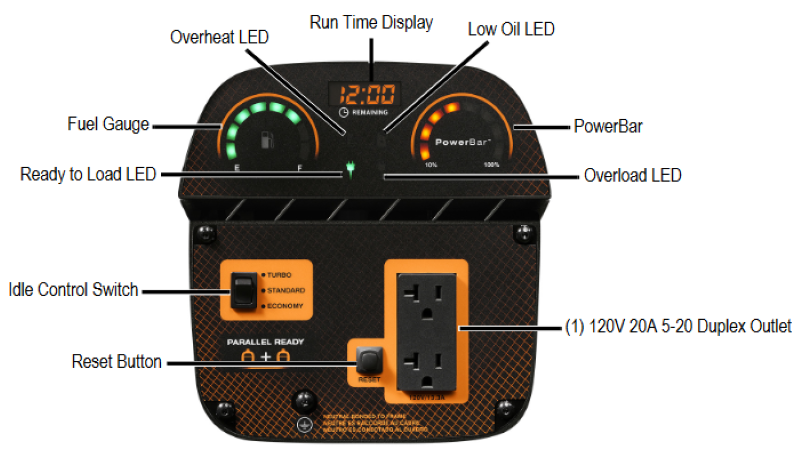 Going a bit lower within the unit’s Control Panel there’s an Idle Control Switch that can be used to change between the generator’s three (x3) different power modes, which are Turbo, Standard, and Economy Modes.

Lastly, at the very bottom right of the unit’s Control Panel there’s a Reset Button and a 120V 20A 5-20 Duplex Outlet that can be used to run the generator’s Smart Paralleling Mode (discussed at the end of the article, right at the Features Section).

The generator’s Electronic Fuel Gauge conveniently shows you its current and remaining fuel capacity. At the same time, the generator’s exclusive PowerBar Power Dial constantly monitors and instantly displays the wattage you’re producing at the moment, and thanks to that, you’ll always know how much capacity you have. 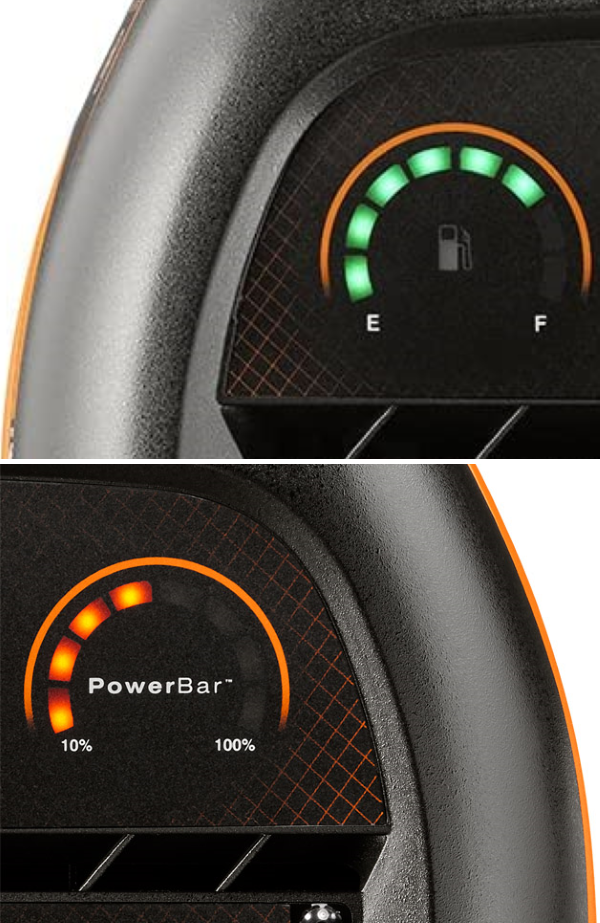 In regards to product feedback, the unit’s dashboard bestows LED displays that can be utilized to continuously monitor the generator’s operating status. 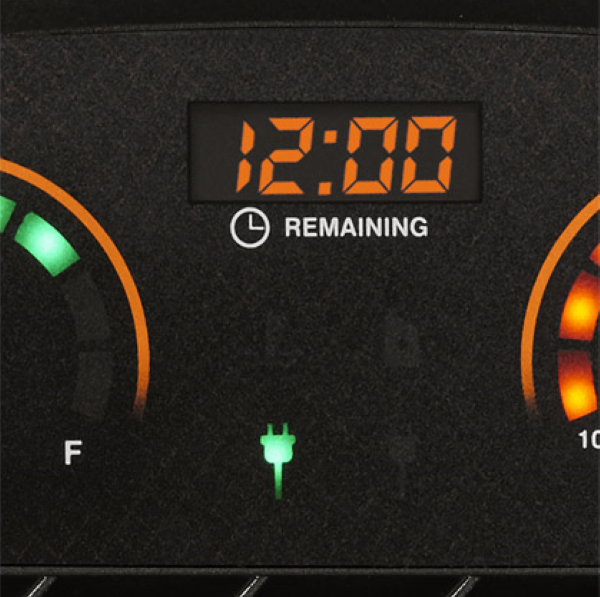 While the generator’s Remaining Run Time Digital Display shows you at a glance exactly how long it will be before you need to refuel the unit to prevent any guesswork or running out for buying more fuel when you least expect it, the unit’s four (x4) Status LED Indicators easily and conveniently alert you about the generator having low fuel or low oil, as well as if its experiencing any overload or overheating situations.

While the unit’s Start, Run and Stop functions can be manually set via the iQ2000’s PowerDial, users can toggle between Turbo, Standard and Economy modes through the use of a simple switch to reduce noise and fuel consumption rates based on load requirements. 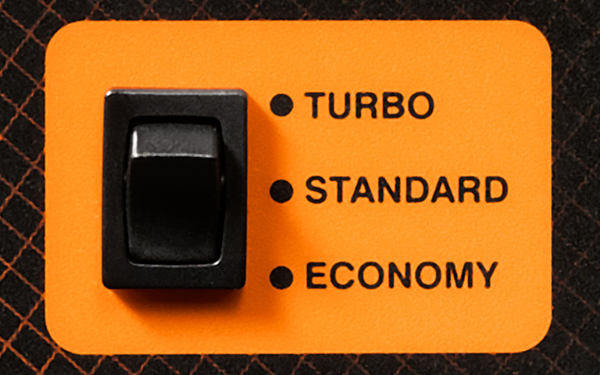 The generator can be connected to a variety of sensitive appliances, including electronics, as its digital inverter module converts the raw power it produces from DC to AC power. 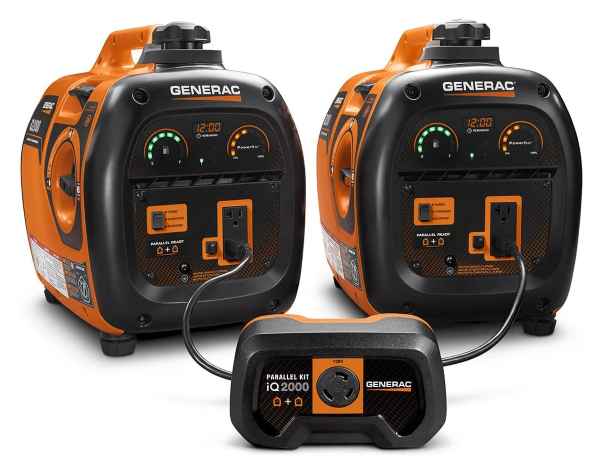 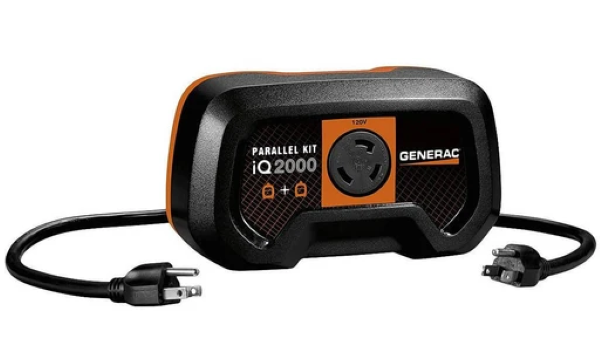 The Generac iQ2000 Inverter Generator is a portable and super-quiet gas-powered generator that provides you with a trustworthy supply of power at all times. It’s perfect for camping trips and backyard / tailgating parties.

If you’re interested in buying it, each unit is currently going for $800, coming with a 3-Year Limited Warranty. You can order yours online, directly from Generac’s official shopping page, which you can access via this link.

Is a 15-Inch Gaming Laptop The Right Size For You?

Is a PC Phone for Real? Could be with the XP Phone