There’s nothing like going outside and grilling a nice, warm meal on top of a hearty fire while surrounded by family and friends, especially now, during the Autumn season. Obviously, almost everyone out there loves to grill, some of us more than others. Nevertheless, whenever you’re cooking outside, whether you’re looking to throw a backyard party at home with a nice cozy fire or you’re simply looking to go camping outdoors and kick back, relax next to a fire pit and enjoy Mother Nature, there’s one major thing that you should consider. You should always decide to go with a reliable fire pit brand, and secondly, you should obviously place your fire pit unit at a safe distance from your house or camping site. This brings us to the BioLite FirePit.

The BioLite FirePit is a high-quality portable outdoors smokeless wood-fed fire pit that allows both barbecue and outdoors enthusiasts to easily enjoy the warmth, smell, crackle, and feel of a wood campfire, all without ever having to deal with any smoke whatsoever. Not only can you use this portable fire pit unit to warm yourself up at the end of each day of this Autumn season, but you can also even cook hibachi-style meals on it by using its Removeable Grill Grate.

Not only that, but the unit also comes equipped with a USB rechargeable 10,400 mAh powerpack that can either power your fire for up to 24 hours, or ultimately, be used to recharge your USB-enabled devices.

Now, let’s have a more detailed look at it and see everything that this portable smokeless wood fire pit has to offer.

Yup, you’ve heard it right. One of the best features that makes the BioLite FirePit an awesome outdoors fire pit is its built-in folding legs, which makes the entire unit extremely portable.

Not only that, but while the unit weighs a somewhat bulky 19.8 lbs (8.98 kg), its high-quality built-in carrying handles ultimately allow you to transport the BioLite FirePit back and forth with ease.

Additionally, the fire pit’s main body frame is composed by a X-Ray Mesh that brings users a 360° viewing angle that ultimately lets you see everything that’s happening inside the fire pit’s roaring fire, including teh glowing embers at the bottom, your choice of fire-pit wood slowly gasifying in the middle, and heart-warming, yet smokeless flames coming out at the very top.

As mentioned earlier, this fire pit also comes equipped with a Removeable Grill Grate that can be used to cook hibachi-style meals. The fire pit’s total grill surface measures exactly 18 inches long by 7.25 inches wide, thus giving you exactly 130 in² (square inches) of cooking area to cook on. 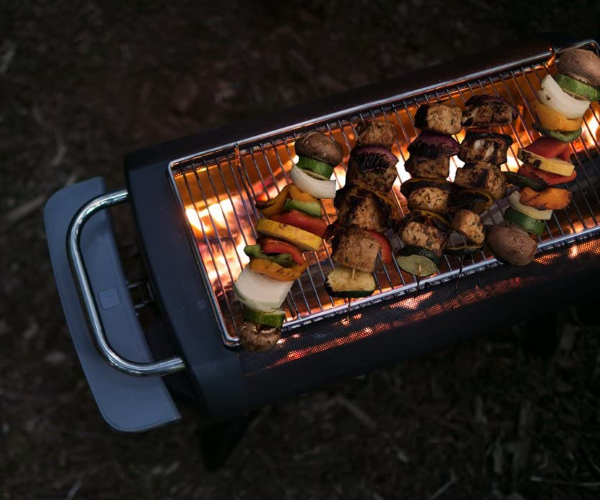 Moreover, the fire pit’s fuel rack can also be fully adjusted to accommodate one of two different types of fuel. As such, you can choose to start its fire with either wood or charcoal as your choice of fuel.

When choosing to go with wood as your fuel source, the fire pit features a maximum capacity of up to 4 standard firewood logs. 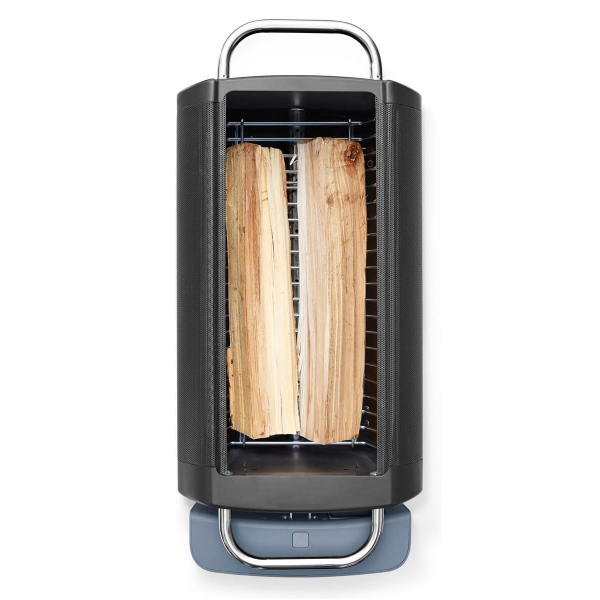 On the other hand, you could choose to go as small chunks of charcoal as an alternative for your source of fuel to get the BioLite FirePit’s fiery flames going strong, yet, with zero smoke at all. 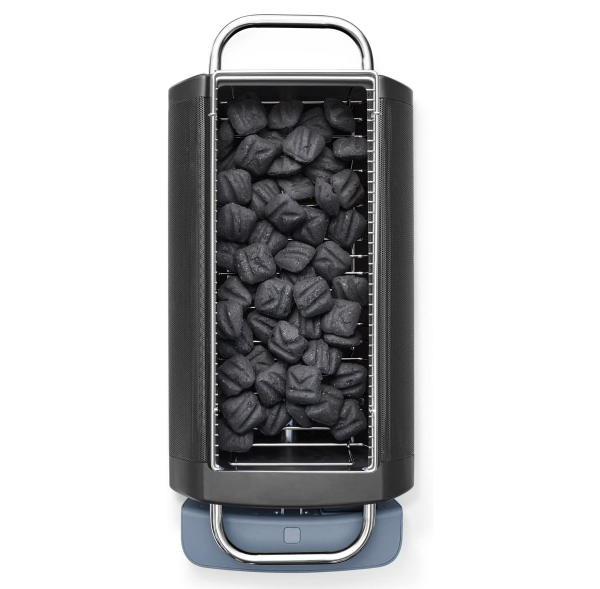 In case you’re wondering exactly how that works, the BioLite FirePit can achieve hyper-efficient flames thanks to its patented airflow technology while simultaneously giving its users a front-row seat to the magic thanks to its X-Ray mesh body, which as mentioned earlier, will provide you with a 360 degree view of its hearty flames at any time you decide to light it up. 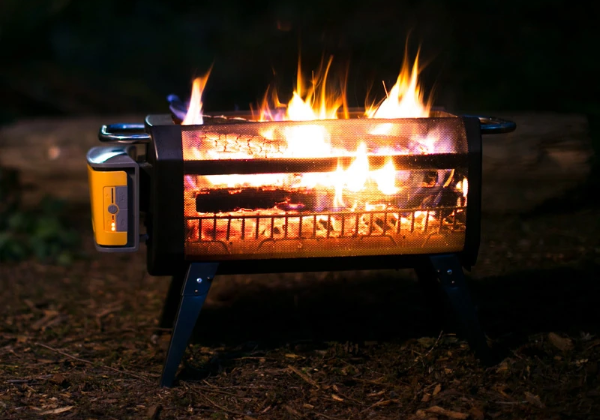 Basically, this outdoors smokeless wood-fed fire pit uses 51 air jets to pump its fiery flames with oxygen along special key locations to ultimately create a more uniform temperature and mixing of gases inside its fire, which can dramatically improve combustion so that users can get a more efficient burn with way less smoke than many other conventional fire pits that are currently available on the market.

As mentioned earlier, the BioLite FirePit also comes equipped with a detachable and rechargeable 10,400 mAh battery powerpack that can not only be used to power up its fire for up to 24 hours, but also could be used to recharge any of your USB-enabled devices whenever you’re not using the unit as your dedicated fire pit. 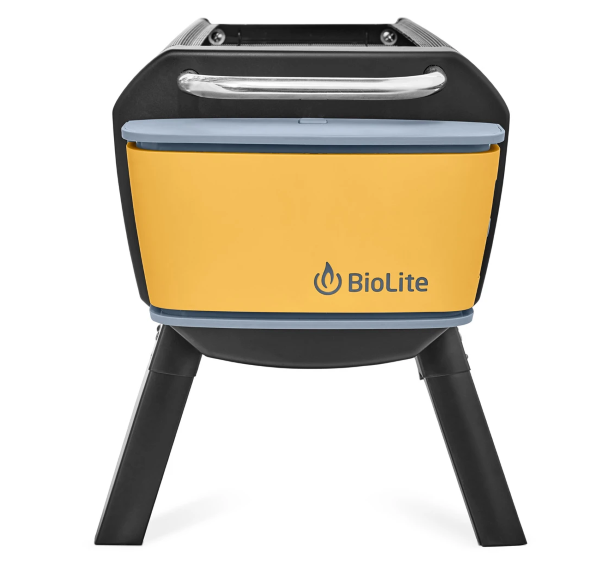 To recharge your USB-enabled devices with the unit’s detachable battery pack, literally all you have to do is detach the 10,400 mAh powerpack, connect your Smartphone, tablet, etc. to the battery pack via a USB-C Charging Cable, and let your device recharging for a few hours.

Lastly, since the 10,400 mAh powerpack itself is a rechargeable battery pack, recharging the battery pack is also quite easy, as all you have to do is connect it to a USB-C Power Plug and wait a few hours to have it back to a full charge.

By choosing to download the optional Bluetooth BioLite Energy App (available for both iOS and Android devices), users can easily control the FirePit’s airflow settings and flame intensity remotely via their Smartphone.

Thanks to that, you can always be in complete control of the fire pit’s ultra-clean and smokeless burning experience.

The BioLite FirePit is a high-quality portable outdoors smokeless wood-fed fire pit that can provide you with the warmth, smell, crackle, and feel of a wood campfire, without any smoke whatsoever.

This portable fire pit can be used to either warm yourself nicely during colder days or to cook hibachi-style meals on it by using its Removeable Grill Grate. Furthermore, thanks to its 10,400 mAh battery powerpack you’re ensured to never run out of battery on your Smartphone, or, whenever you’re not using it to recharge your devices, to power up the fire pit’s flame.

Overall, this unit features a very sleek and compact design, which makes it great to take it with you literally anywhere. It’s an awesome fire pit to have both at home as well as to take with you on your camping truck.

If you’re interested in getting it, each unit is currently going for $250. You can order yours right now, direclty from BioLite’s official shopping page, which you can access by clicking this link.

The Generac iQ2000 Inverter Generator is a portable and super-quiet gas-powered generator that provides you with a trustworthy supply of power at all times. It's perfect for camping trips and backyard / tailgating parties.
Read more
Outdoor

The Tentsile Safari Vista is a 3-in-1 3-Person convertible tree tent that combines a hammock with the protection, security and multi-occupancy of a tent and the versatility of a tree tent. This amazing 3-Person tent can ultimately be used by a group of three (x3) outdoors-enthusiastic family members and/or friends that are passionate about camping and exploring the outdoors. Both installing and packing down the tent are easy tasks, especially after learning the process the first time. Furthermore, thanks to the tent's high-quality hammock and its built-in anti-roll straps you're guaranteed to have a perfect sleep each and every night. At the same time, the tent's high-quality Removable Waterproof Rainfly and fully-removable Insect Mesh Cover Accessory keep you completely protected from all weather elements and unexpected atmospheric conditions as well as those pesky mosquitoes.
Read more
Miscellaneous Gadgets

The GoSun Flatware is a compact and ultra-portable set of reusable stainless-steel utensils that's focused on eliminating the single-use plastic utensils that people use on a daily basis. Ultimately, you're offered a compact, portable, and infinite re-usable set of stainless-steel utensils that works as a much better way than plastic utensils, and with it, you can start saving the world from plastic waste. If you're used to remembering your Smartphone, wallet, and keys before leaving your house, you'll also remember to bring your Flatware with you. At just 3.5 credit cards thick, it fits into just about any credit card slot, making it perfect for any meal at the office, outdoors, or just about anywhere else.
Read more
Outdoor

The SOTO Pocket Torch is a portable and reliable micro-torch that can produce a strong usable flame for starting a fire or finishing a Home Project / DIY Project. It can be easily used both outdoors and indoors. Overall, it’s a great little fire-starting gadget to have around with on at all times so that you can easily have a reliable and easy-to-use fire source.
Read more

While miami-based Wor(l)d Media & Technology Corp's Helo LX might look like you're average fitness tracker, it's not. The company, rather, calls it a...
Read more
Computers