During the COVID-19 worldwide pandemic, people have been looking for new and better ways to stay protected from contracting the SARS-CoV-2 virus. Obviously, following the safety guidelines implemented by governments across the world can help you stay protected. This includes following the social distancing guidelines and wearing personal protective equipment like a facial mask and/or face shield when going outside. However, according to both the CDC (Centers for Disease Control and Prevention) and the U.S. FDA (United States Food and Drug Administration), regularly washing your hands with soap and water for at least 20 seconds is essential, as it can help you to stay safe from contracting the virus; and that goes especially after going to the bathroom. However, at any point that you’re looking to sanitize your hands but soap and water are not available, the CDC recommends consumers to use an alcohol-based hand sanitizer that contains at least 60% alcohol. This is where the GelAuto Dispenser comes in.

The GelAuto Dispenser is a smart and App-enabled, electronic, hospital-grade, wearable hand sanitizer gel dispenser system that offers you regular gelling reminders via its proprietary Smartphone App to ultimately help you make a consistent hand hygiene gelling routine that’s as intuitive as a natural reflex.

Its proprietary Mobile App is exactly what takes your hand sanitizing routine to a whole new level, as it features several customizable settings, as well as location-enabled reminders, group features, and even performance tracking tools that provide advanced insights into the wearer’s gelling behavior.

Lastly, the GelAuto Dispenser System also comes conveniently equipped with already pre-filled cartridges that are filled with enough high-quality hand gel for about 50 uses wherever and whenever you need them.

Now, without further ado, let’s have a slightly more detailed look into this smart and automatic wearable hand sanitizer gel dispenser system and check out everything that the GelAuto Dispenser has to offer you.

Starting with the GelAuto Dispenser System’s exact dimension, the product comes in a very compact and ultra-sleek design, measuring just 2.25 inches long by 1.75 inches wide by 3.25 inches tall. Furthermore, the whole unit is also quite lightweight, as it only weighs 4.1 oz. (with its cartridge already accounted for), and that ultimately makes it ultra-portable, and perfect for you to wear and carry with you at all times.

As such, thanks to its compact and ultra-portable design, you can wear this smart wearable hand sanitizer gel dispenser system pretty much anywhere that you’re planning to go next, whether that’s going for a quick run to your local grocery store, a walk in the park, or even for your weekly car refuel at your local gas station.

Furthermore, right at the back of the unit the system also comes equipped with a very sturdy and high-quality sliding and mounting clip.

Ultimately, this small, yet strong and reliable clip makes it possible for users to easily attach this smart and wearable gel dispenser system anywhere they want to, including their pants top strap, as well as belts, bags, and pockets, all while the system’s one-handed dispensing functionality makes their hand hygiene and gelling sanitizing routine a breeze while they’re on-the-go.

As mentioned earlier, the system also comes equipped with the company’s GelAuto cartridges, which are filled with the reliable Germ-X brand of hand sanitizer gel, a trusted U.S. brand that meets CDC guidelines. These trustworthy pre-filled cartridges are filled with enough high-quality hand gel for about 50 uses, and are also fully-recyclable, so the company is in fact eco-conscious as well, which ends up making this device a great hand sanitizing gel product for any environment eco-conscious consumers. 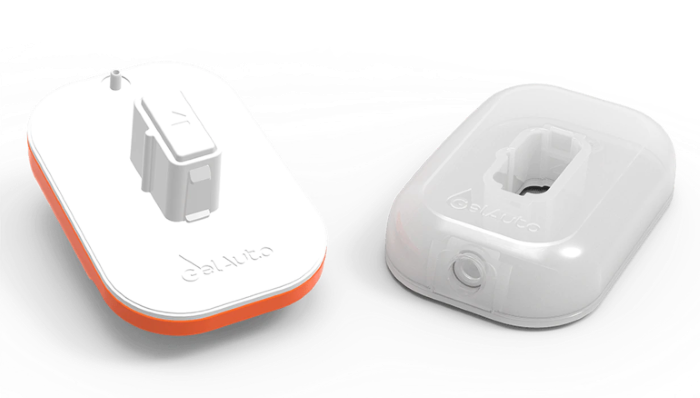 According to both companies (Blink Device Company, makers of the GelAuto Dispenser, and Vi-Jon, Inc., US manufacturer of the Germ-X brand), this smart wearable hand sanitizer gel dispenser is very effective, and capable of eliminating up to 99.99% of many common harmful germs and bacteria in as little as 15 seconds.

Together with each unit you are also offered a total of 5 Cartridges Prefilled with Germ-X Gel within your ordered package.

It’s also worth to mention that more Cartridges can be easily and conveniently ordered online at the company’s official website at a very affordable price that starts at just $24.95 for an extra 5-Pack of additional and replaceable Cartridges (but there’s also a 10-Pack option and even a 2-month Subscription option for a 10-Pack delivery after every 60 days).

Now, since this is a smart wearable hand sanitizer gel dispenser system, this smart wearable health gadget also comes equipped with a small, built-in rechargeable battery, which lasts you just over a week on a single charge.

Recharging the system’s battery is also quite easy, as all you have to do is gently snatch the system into its included Wall Charger Station with Micro-USB Charging Port to have the unit’s internal battery recharge back to 100% battery. 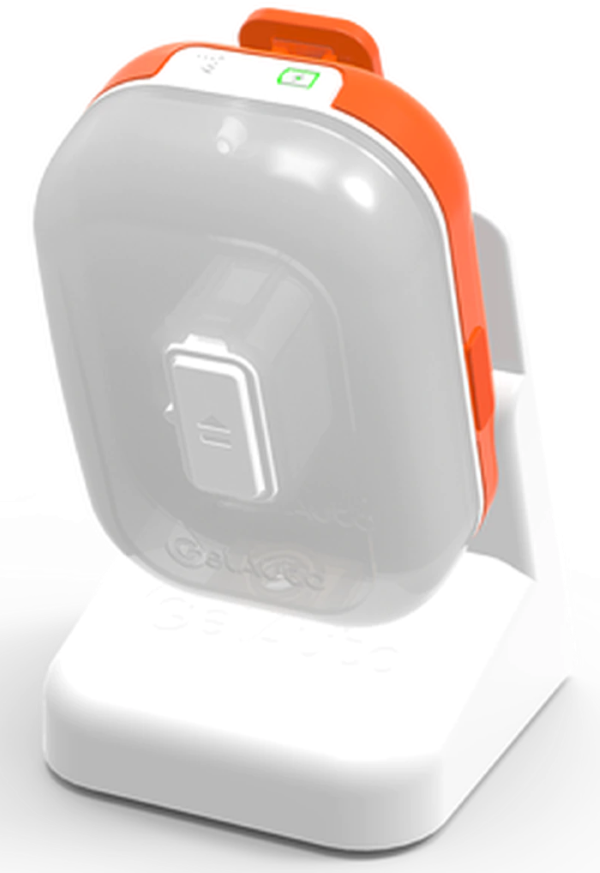 Ultimately, the system’s included compact charging station makes it very easy for users to keep their GelAuto charged and ready for use, even while they’re on-the-go.

HOW TO USE THE SYSTEM?

The company recently released a video-guide / video-tutorial that quickly teaches everyone about how to use the GelAuto Dispenser System in a accurate and reliable way.

Feel free to check out that video here, which we’ve got embedded right below:

As mentioned earlier, both the CDC and the U.S. FDA advise citizens to regularly washing their hands with soap and water for at least 20 seconds in order for them to stay better protected from the COVID-19 disease, which, according to both entities, will help to slow the spread of COVID-19.

Furthermore, for any specific time where you don’t have access to water and soap – meaning at any point that you’re on-the-go or even just within your daily commute –  the Centers for Disease Control encourages citizens to use any reliable hand sanitizer gel that contains at least 60% alcohol.

Lastly, on a recent interview and Press Release (Sep 22, 2020), MD, PhD, and Blink’s CEO Justin Hulvershorn stated that “Research has shown that health care providers gel their hands significantly more often whenever they have access to wearable gel dispensers, which ultimately results in lower rates of hospital acquired infections”.

Justin then explained with a bit more detail about the reason why the company (Blink) further developed its original hospital-focused product (the original GelAuto system) to release it as a global product that’s designed for the general audience.

“We designed the GelAuto dispenser for the health care environment, and we were just starting evaluations in hospitals when the pandemic surfaced. When numerous physician participants asked if they could buy dispensers for their family and friends, we realized that the GelAuto system has a broader role to play in helping to keep our families and communities safe. So, we expanded our focus and accelerated our timeline to make GelAuto available to everyone.”

As you can see, this is exactly where the GelAuto wearable gel system comes into play, as it offers everyone out there the perfect solution for daily hand sanitizing while still allowing you to stay focused on the rest of your work day.

The system’s ergonomic design facilitates one handed use while its App-enabled reminders promote a hand sanitizing routine consistency, ultimately making recommended hand gelling as easy as it can get.

Lastly, what makes this device work as a smart wearable hand sanitizer gel dispenser system is the unit’s proprietary Smartphone Companion App, which is called the GelAuto Mobile App. Keep in mind that the App is available for both iOS (requires iOS 11.0 or higher) and Android (Android 6.0 or higher) devices.

(Specifically for Android users, there should be a Google Play Store link available very soon).

The GelAuto Dispenser is a smart and App-enabled, electronic, hospital-grade, wearable hand sanitizer gel dispenser system that offers you regular gelling reminders via its proprietary Smartphone App to ultimately help you make a consistent hand hygiene gelling routine that’s as intuitive as a natural reflex.

Overall, this wearable, smart, one-handed and one-touch electronic gel dispenser makes it super convenient for you to have a reliable and easy way of maintaining a healthy hand sanitizing / hygiene gelling routine, ultimately making it easier than ever for anyone to have their hands quickly sanitized at any location, whether that’s at the store, the park, at a gas station or literally anywhere else.

If you’re interested in ordering it, each package will cost you exactly $99.95, coming included with the GelAuto Dispenser Main Unit, as well as its respective Wall Charger with Micro-USB port and a total of 5 Cartridges that come Prefilled with Germ-X Gel.

You can order yours online right now, directly from GelAuto’s official website and shopping page, which you can access directly from this link here.

The Apollo Neuro is a wearable device that can regulate your HRV (Heart Rate Variability) via gentle vibrations in order to improve your resilience to stress, which can ultimately help you to focus, recover, sleep, and more.
Read more
Health Gadgets

The mineralgia Pain Relief Cream is a special pain relief cream blend that's formulated of 98% naturally derived ingredients, as well as with Dead Sea healing minerals. This pain relief cream features a purely vegan-based formula that's made of 98% natural ingredients, and as such is both Gluten-free and Paraben-free. All that makes it an extremely gentle and non-irritating pain relief cream that's completely safe for daily use, multiple times per day, and also safe to use for all ages, including people with sensitive or compromised skin.
Read more
Health Gadgets

The Hero Pill Dispenser is a smart medication management system that can automatically organize, dispense, and track all of your medication, for which you can configure all its medication management functionalities via the Hero App. This all-in-one automatic pill dispenser can be used by yourself, or alternatively, by a loved one to more easily control all of your (or their) medication intake. With it, you can make sure that you (or a loved one) always take your pills at the right time, each and every time.
Read more
Health Gadgets

The Visybl SafeTeam is a Smart Social Distancing Wristband that can be used to continuously monitor separation between workers to ensure social distancing. With it, businesses all over the world can ultimately have a reliable way of maintaining and reinforcing the mandatory social distancing guidelines requested by gonverments worlwide between all of their workers during any working hours.
Read more