When it comes to power banks, while most of these portable battery packs are designed to be somewhat portable (to an extent), their compact size usually only goes so far. As such, you still have to find a place to carry them with you while you’re on-the-go, and that goes by either carrying them inside your bag, backpack, or work suitcase / laptop suitcase. Sure enough, having a power bank with you at all times ensures that your Smartphone never runs out of battery when you need it the most. However, for anyone that’s looking to go through their daily commute in a lightweight manner, it’s not really ideal to carry a “brick” of a power bank with them, as most power bank designs are somewhat bulky and cannot really be transported inside a pocket, like a Smartphone would. Nevertheless, there’s one new power bank on the market that promises to fix that exact problem. Meet the TEVOLT Power Bank.

The TEVOLT Power Bank is a compact and ultra-portable charging bank that can be directly attached to the back of any Smartphone, offering compatibility with all Smartphone models and supporting both 15W Wired Fast Charging and 10W Wireless Charging.

It’s the perfect battery-charging device to have around whenever you have no wires or power outlets available, as well as for any time that you cannot take a break from work but still need your Smartphone to have enough battery to last you for the rest of the work day.

Lastly, since the TEVOLT Power Bank can come with multiple battery pack units, you can leave one at home or at work re-charging via its charging cable and take the already-charged one with you by comfortably fitting it inside your pocket and then quickly getting it out and attaching it to your Smartphone’s back-side whenever you find it running low on battery.

Now, without further ado, let’s dive into our detailed review of the TEVOLT Power Bank and check out everything that makes this newly released power bank such an awesome piece of equipment.

Starting with its size, as mentioned earlier, this is one of the smallest and most compact power bank units that you can currently find available on the market, measuring just 4.2 inches long by 2.6 inches wide by 0.5 inches thick / tall (107.5 x 66.5 x 12.8 mm). Not only that, but the TEVOLT is also quite lightweight, weighing just a measly 4.51 oz. (128 g).

Thanks to that, you can easily carry it with you at all times, not only in a bag or backpack (like most other power banks on the market), but also inside your pocket without feeling any sort of discomfort whatsoever, and that’s mainly thanks to the TEVOLT’s really compact design. 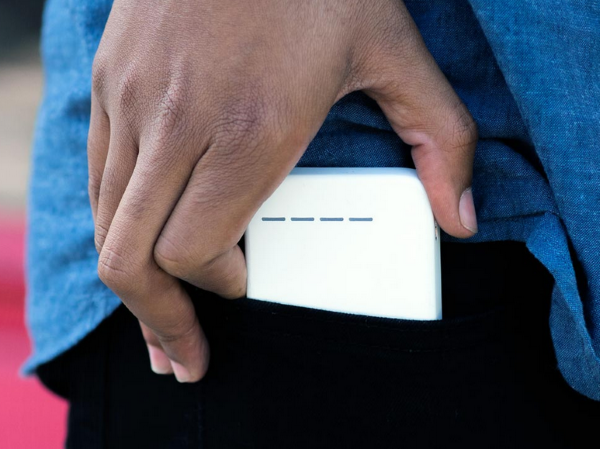 Heck, this thing is so small it even fits comfortably within the palm of your hand. Furthermore, the TEVOLT Power Bank is also made of really durable materials, and even features a really nice rubber matt finish throughout its hard-plastic cover. 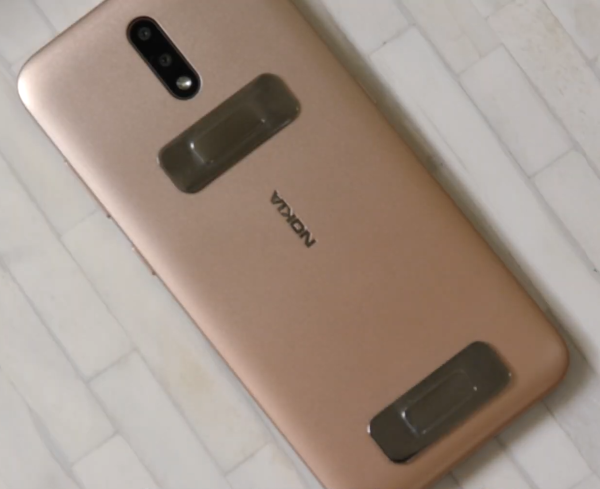 One of those horizontal magnetic stud strips stays installed at the bottom and one at the top. These magnetic studs are also quite lightweight, weighing just 0.12 oz. (3.5 g) each, meaning an added 0.24 oz. (7 g) of combined weight to the power bank’s weight of 4.51 oz. (128 g), making it a total of around 4.76 oz. (135 g). So, your Smartphone still stays extra lightweight after installing the TEVOLT’s proprietary magnetic stud strips, as well as whenever having the TEVOLT Power Bank attached to it for charging.

These two included horizontal magnetic stud strips are quite strong, and thanks to that, all you have to do to attached the TEVOLT Power Bank to your Smartphone is to quickly and conveniently snap it onto its magnetic studs. 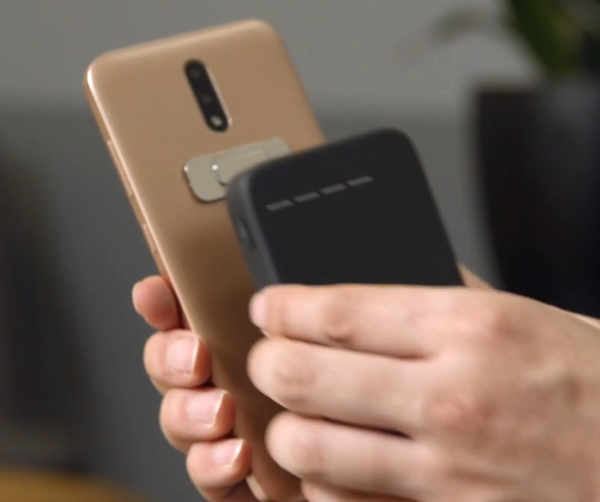 Now, you might be wondering just how strong are the TEVOLT’s two magnetic stud strips, right? Extremely strong, I might say. In case you need some visual insight, here’s the company’s demonstration image, which showcases a Smartphone being shaken with quite some energy with the TEVOLT Power Bank already installed and attached to it, all while its two ultra-strong magnetic stud strips keep it perfectly in place without ever letting go of it.

All that makes the TEVOLT the ultimate power bank to have around with you at all times.

Moving on to the “Compatibility” side of things. In case your worried about whether or not the TEVOLT is compatible with your Smartphone, then you’ll be quite happy to know that the TEVOLT features universal compatibility with any and all Smartphone models, meaning you can easily install it in whatever Smartphone you currently have.

Not only that, but whenever you feel like its time for you to upgrade your Smartphone from an older model to a more modern piece, then all you have to do is to easily detach the two horizontal magnetic stud strips that you had installed on the back of your older Smartphone and carefully install them in your new phone’s back-side.

That’s really all there is to it. After that’s done you can then conveniently use the TEVOLT as your new Smartphone’s dedicated power bank.

Now, diving into the battery-life side of things. Each TEVOLT Power Bank comes equipped with a built-in 5000mAh rechargeable Lithium-Ion battery that can ultimately FULLY charge any Smartphone that’s equipped with a 4000mAh internal battery.

In fact, each 5000mAh TEVOLT battery pack stores more power than both the new iPhone 12 and the Samsung Galaxy S10, and that makes it a really nice choice of portable power bank to go with for any modern Smartphone. 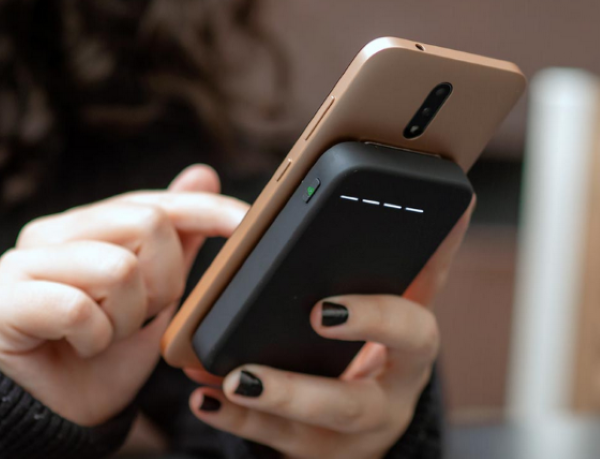 As mentioned at the beginning of the article, the TEVOLT supports both 15W Wired Fast Charging and 10W Wireless Charging. Moreover, for any Smartphone that doesn’t support Qi-Wireless Charging, you have nothing to worry about, as the TEVOLT battery pack also ships together with a short USB Charging Cable that still makes charging your Smartphone with the TEVOLT a very easy and convenient task. 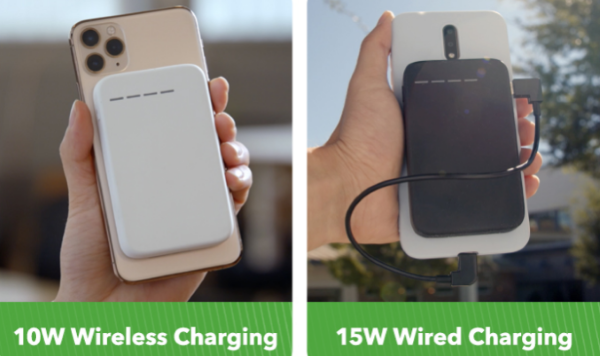 Lastly, since you can get the TEVOLT battery pack in sets of multiple units (either 1, 2, 4, or 6) you can conveniently leave one unit charging at home or at the office (as mentioned earlier) and take another already-charged TEVOLT Power Bank with you comfortably stored inside your pocket for whenever you need some extra battery-power on your Smartphone.

The TEVOLT Power Bank is a compact and ultra-portable charging bank that can be directly attached to the back of any Smartphone, offering compatibility with all Smartphone models and supporting both 15W Wired Fast Charging and 10W Wireless Charging.

You can either get it in a set of 1, 2, 4, or 6 battery packs. Going for multiple options is clearly the best way to use this ultra-compact and ultra-portable swappable magnetically-attached power bank.

Overall, this is a really nice piece of equipment to have for anyone that quickly goes through their Smartphone’s battery from 0% to 100% before their work day is over. It’s an amazing power bank to have around with you at all times.

If you’re interested in getting it, all you have to do is to support the company’s Indiegogo Crowdfunding Campaign with a minimum pledge of $39 (saves you $11 from its future retailing price) to get a 1-pack. Slightly bigger pledge amounts of $59, $115, or $329 will allow you to get the 2-pack, 4-pack, or 6-pack sets, respectively. Simply click the link provided above to check out the company’s Indiegogo Crowdfunding Campaign.