Nowadays, buying a Jump Starter (or Jumper Pack) is a great investment, and overall, it always makes for a great addition to your car’s (or truck’s) emergency kit, as these portable battery-powered devices allow you to jump start vehicles in almost no time. While the main goal behind Jump Starters is to give you the peace of mind to get back on the road quickly at anytime you find yourself stranded, these handy little gadgets can also provide you with an extra source of power while you’re on-the-go, which you can conveniently use to recharge all of your electronics, including your Smartphone, tablet, laptop, wireless earbuds, and more. With all that said, if you’re thinking about getting a Jump Starter for your own vehicle, then have a quick look at the Duracell Bluetooth Lithium-Ion Jump Starter 1100.

The Duracell Bluetooth Lithium-Ion Jump Starter 1100 is a portable Car Jump Starter that’s powered by a powerful 8010mAh (29.6 Wh) Lithium-Ion Battery, which also works as a USB Power Bank and as a 200 lumen LED Flashlight, and even features Low-Battery Smartphone Notifications via Bluetooth.

Featuring a IP65 water-resistant rating, the ability to quickly jump start many different 6L Gas Engines as well as many different 3L Diesel Engines, and even an internal Safety System that runs with a spark-proof operation, which also features several Safety Functionalities, which all include protection against Reverse Polarity, Over-Voltage, Over-Temperature, and Under-Voltage.

Additionally, you can also use it together with its proprietary PowerHub App so that you can be notified via your Smartphone whenever the jump starter needs to be recharged.

With it, you can be better prepared for any inconvenience while you’re on the road.

Now, without any further ado, let’s have a more detailed look at its design and check out everything that this powerful car jump starter can really do.

Starting with the Duracell Jump Starter 1100’s size, this car jump starter features a reasonably compact design throughout the whole unit, and as such, you can easily have it stored inside your glove compartment, a door side panel (if large enough), or any other car compartment that’s large enough to store it.

Not only that, but the jump starter’s outer shell also features a IP65 weatherproof construction – meaning that it is weather-resistant – which makes it possible for the unit to withstand any weather conditions, including rain, sleet and snow, thus giving you the possibility to use it outdoors.

Moving on to its jumper cables, these are very well constructed and as such, are definitely built to last, and the same goes for each of their metallic clamps. 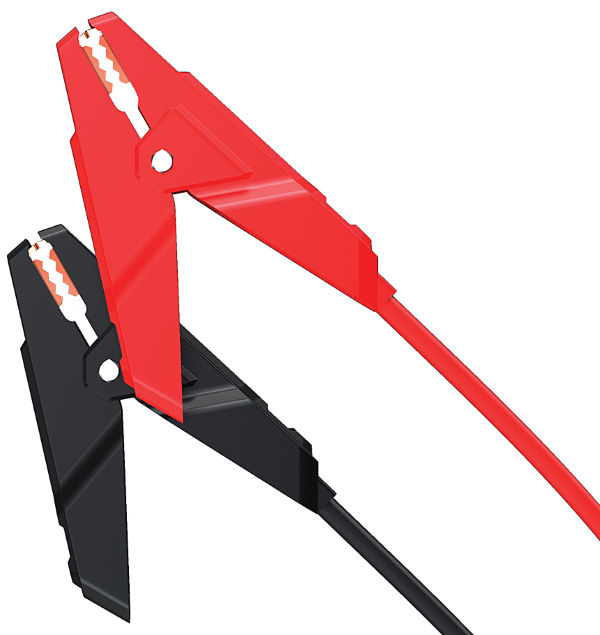 Both of the jump starter’s jumper cables are fairly easy to grip, as each of them features a large clamp that’s easy enough to grasp and to maintain a solid grip of. 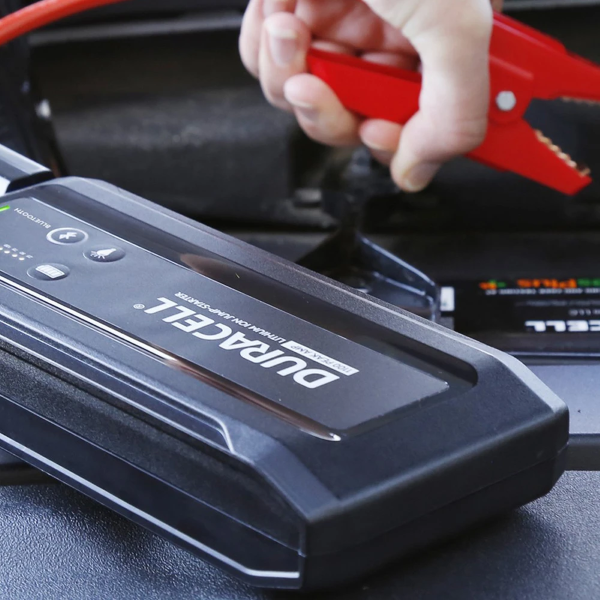 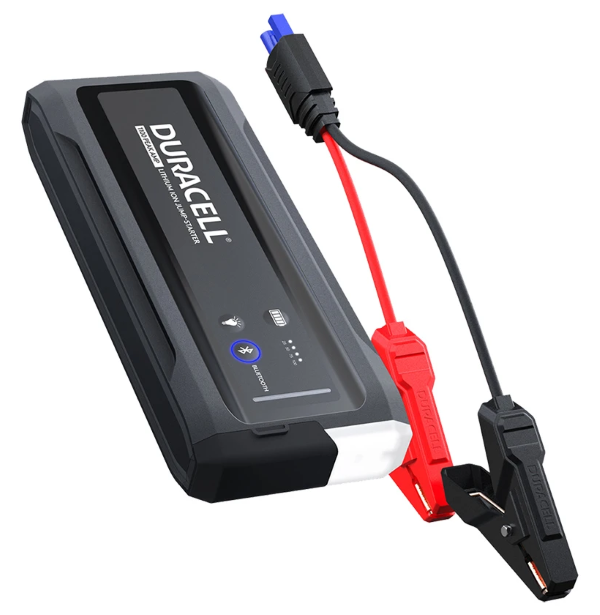 Keep in mind that this small interface (which you can find at the right side of the device after pulling out its protective cover) is where you’ll also find the jump starter’s dedicated USB-C Output Charging Port and USB Input Charging Port, which for the latter, you’ll use to recharge the unit’s internal battery.

Lastly, and as mentioned earlier, this portable car jump starter also comes equipped with a built-in 200 lumen LED work-light that you can use as your dedicated Flashlight for whenever you’re trying to jump start your car under low light conditions, as well as to illuminate anything else during any other situation (camping outdoors, searching for something inside your car, etc.).

It’s important to note that the Duracell Jump Starter 1100’s integrated 200 lumen LED work-light can be used in three (x3) different Light Modes, which are Low Light, High Light (with its maximum of 200 lumens) and SOS Mode (for having it working as an intermitent blinking light).

As said before, the Duracell Bluetooth Lithium-Ion Jump Starter 1100 has all of its functionalites (car jump starter, portable USB Charger and 200-lumen Flashlight) powered by a powerful 8010mAh (29.6 Wh) Lithium-Ion Battery, which features an Amperage of 2.4 amps and a Voltage of 5 volts. 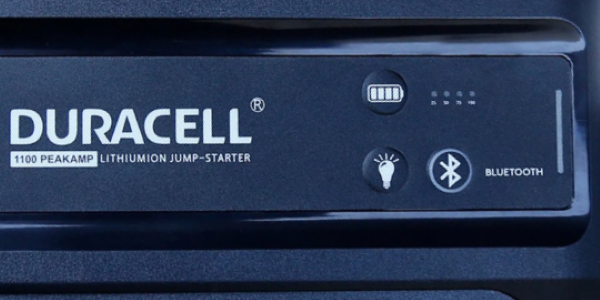 Ultimately, you can get a maximum of 1100 Peak Amps of power out of it to quickly jump start 4-, 6-, and 8-cylinder gasoline engines with up to 6 liters of displacement, or alternatively, to start up most diesel engines with up to 3 liters of displacement. On average, you can get up to 40 jump-starts on a full charge, which, mind you, can actually hold up pretty well and stay fully charged for an entire year.

Now, as stated earlier, you can also use the Duracell Jump Starter 1100 as your dedicated USB Charger for any of your portable electronic devices while you’re on-the-go, whether that’s a Smartphone or a tablet. To do that, all you have to do is to connect your device to be recharged directly to the jump starter’s 2.4 Amp USB-C port. 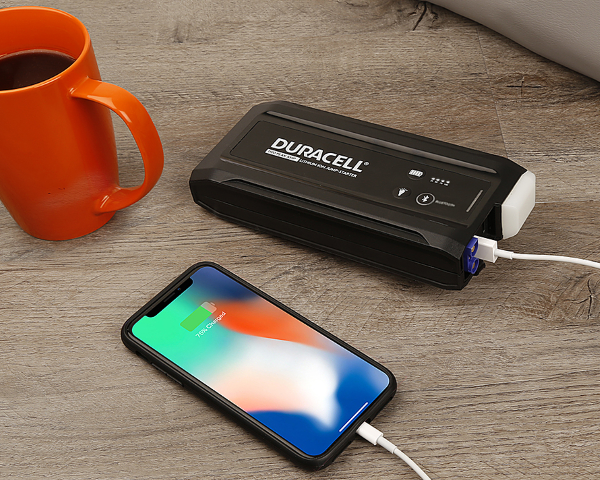 Overall, its battery holds enough power for you to be able to get up to 3 smartphone recharges per each full charge.

Lastly, to recharge the jump starter’s built-in 8010mAh Lithium-Ion Battery, all you have to do is to connect its USB Charging Cable to its dedicated USB Charging port.

As said at the beggining of the article, this car jump starter comes equipped with an internal Safety System that runs with a spark-proof operation, which also features several Safety Functionalities that ultimately offer you protection against Reverse Polarity, Over-Voltage, Over-Temperature, and Under-Voltage.

I’d also like to note that the Duracell Jump Starter 1100 is certified for both UL2743 and UL1642 Safety Certifications, which is basically what ensures that all of its Safety Functionalities work properly.

Lastly, the jump starter’s battery also features an Automatic Shut-Off functionality, and thanks to that, if you ever forget about it and leave it working for a few minutes, its battery’s safety Auto Shut-Off function will kick-in and shut the unit Off for you.

As mentioned earlier, you can also use the Duracell Bluetooth Lithium-Ion Jump Starter 1100 together with its proprietary PowerHub App (available for iOS and Android devices) so that you can receive Low-Battery Alerts / Notifications via your Smartphone whenever the jump starter’s battery is running low on power, thus informing you that it needs to be recharged.

This works thanks to the jump starter’s integrated Bluetooth Low Energy technology, which pairs directly with your smartphone and ultimately connects it to the PowerHub App. This functionality can be activated by simply clicking the jump starter’s built-in Bluetooth Connectivity Button. 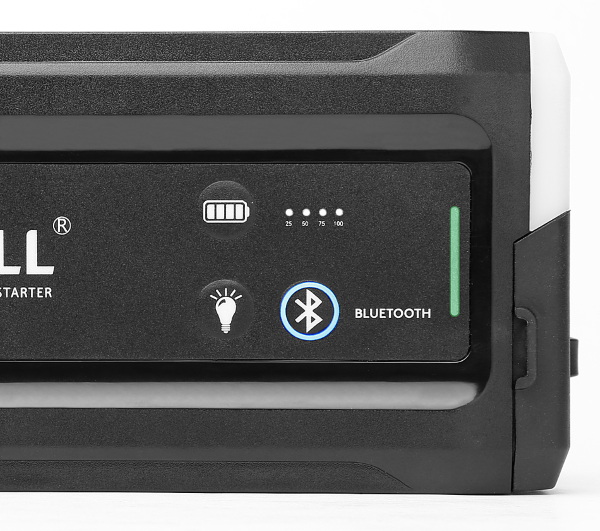 While the PowerHub App can be used for advanced battery monitoring and charging alerts, the App also features an interactive step-by-step guide that will dynamically walk you through the Duracell 1100’s jump-starting process.

Lastly, in case you require any assistance to operate the unit, the App also allows you to chat directly with the company’s live customer support team, just in case you have any questions that need a quick and professional answer.

Inside its package, users will find: their Duracell Bluetooth Lithium-Ion Jump Starter 1100 device, an included Carrying & Storage Pouch, the unit’s Jumper Cables as well as its DC USB Car Adapter, a USB Charging Cable, and a User’s Manual.

The Duracell Bluetooth Lithium-Ion Jump Starter 1100 is a portable Car Jump Starter that’s powered by a powerful 8010mAh (29.6 Wh) Lithium-Ion Battery, which also works as a USB Power Bank and as a 200 lumen LED Flashlight, and even features Low-Battery Smartphone Notifications via Bluetooth.

Featuring a IP65 water-resistant rating, compatibility to jump start many 6L Gas Engines and many 3L Diesel Engines, and an internal Safety System that brings you many Safety Functionalities with protection against Reverse Polarity, Over-Voltage, Over-Temperature, and Under-Voltage, this jump starter is a great one to go with, without a single doubt.

Overall, this powerful jump starter is the perfect emergency gadget to have around while you’re on the road.

If you’re interested in buying it, each unit is currently going for $129.99 each. You can order yours online right now, directly from the company’s official shopping page, which you can access by clicking here.