Playing board games with the rest of your family is not only a very fun activity, but also allows you to strengthen the bonds you have between each other as well as to create a lot of fun and memorable moments. So, if either you or your family (or even everyone together) have been getting tired of playing some of your old-school boards games (like Clue, Monopoly, Risk, Scrabble, and even Battleship) and you’re now on the look for a brand-new board game to bring all the fun back to your family game nights, then consider trying a game from a multi-award winning company like Semper Smart Games’ brand-new and Blobby’s Pizza Math Card Game.

Blobby’s Pizza is a fun and strategic math cards game that is played between different cute pizza-eating monster cards, where you have to eat your way to the highest bill, and get better at fractions, decimals and percentages!

However, while that task might first sound somewhat easy, even the best math-heads will have to keep their eyes on their pizza pies, because you never know when another player’s monster will be trying to steal your pizza.

Overall, this game allows players of almost all ages (recommended from 8 years and up) to learn essential STEM math, including fractions, decimals and percentages, all in a very easy and super fun manner and without you even realizing it.

HOW DOES THE GAME WORK?

To put it simply, the main goal behind this monster pizza eating contest and math-cards game is basically to eat your way to victory by simply completing whole pizzas out of Pizza Slice Fraction Cards and tabulating them on your guest check. In other words, the highest bill wins.

The game’s Pizza Menu consists of 4 pizza types (Cheese, Pepperoni, Veggie and Supreme), which all come with varying price values.

The whole game consists of a total of 128 playing cards, which mainly include 11 different Pizza Slice Fraction Cards (with different faction values) of 4 different Pizza Types, 7 different Colored Monster Card Types that are supposed to be used to eat different fraction sizes, as well as 3 Swap & Switch Squid Waiter Cards that can either be used to swap your own plate with someone else’s plate or alternatively, to swap the game’s order between Clockwise and Counter-Clockwise.

You also get 8 Tax and Tip Cards (for a more advanced play-style that also brings percentages to the game’s math-based strategy problems), and for that game mode, you also get a Tax and Tip Percentage Learning Aid Card. 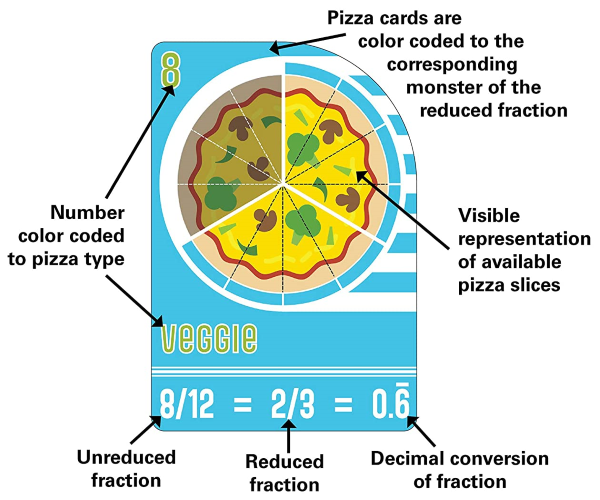 Each of these Pizza Slice Fraction Cards comes with several text-written features that can both help to enhance your group’s game-play as well as the card’s and the game’s own education value. These text-written features include a Number Color Code that matches a specific Colored Monster Card (found at the top left) as well as a Description of the Pizza Type that that card matches to.

Additionally, the game’s set also comes with a realistic Restaurant Guest Check Score Pad that allows you to keep track of your bill, along with 6 pencils for you to take all of your notes. 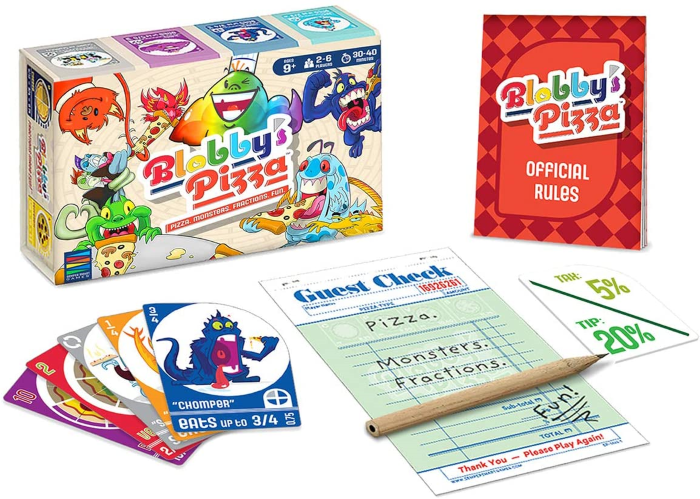 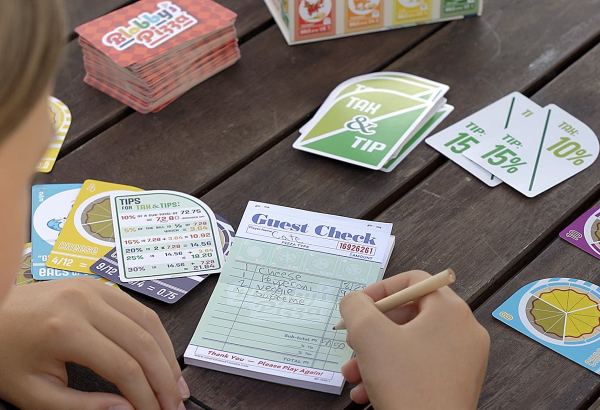 Each purchase also comes with three (x3) downloadable bonus games that are perfect for younger ages, as well as more advanced games that are great for older players to play and quickly learn ratios and percentages. 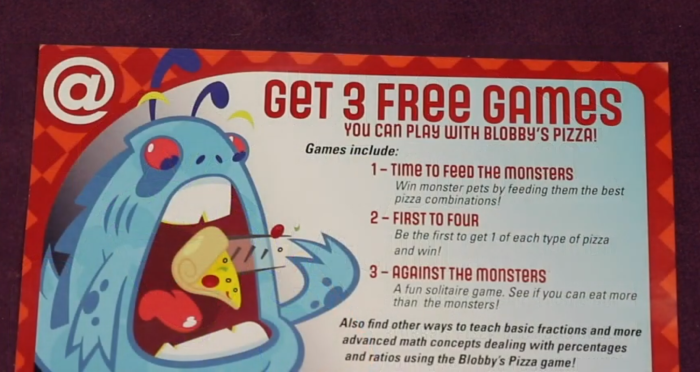 Players can steal one or several cards that are either EQUAL or of LESS VALUE than the fraction value that their Pizza-Eating Monster Card can eat. 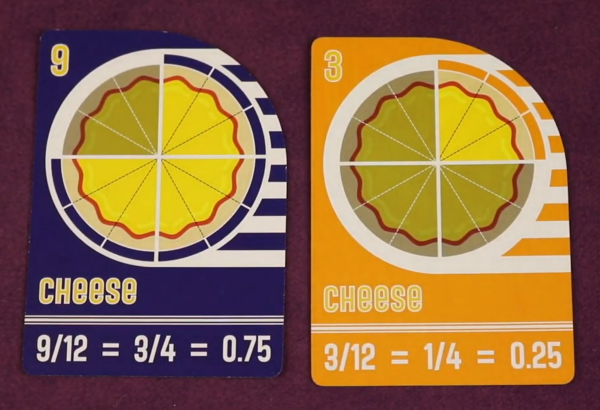 Not only that, but you also have to watch out for the absent-minded Squid Waiters, as opponent-players that send any of their Swap & Switch Squid Waiter Cards to your table to swap your plate with someone else’s plate can ultimately end up messing with your monster’s pizza-dining plans! 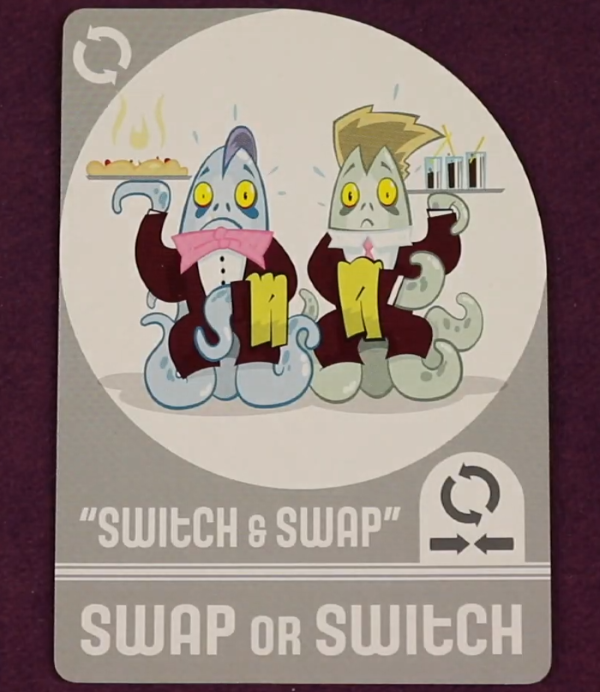 And you’ll also have to remember that these cards can also be used for swapping the game’s order between Clockwise and Counter-Clockwise.

Lastly, there’s also a unique and very special Monster Card called “Chef Blobby” that can only be played when at least one of each differently colored Monster Cards has been played. 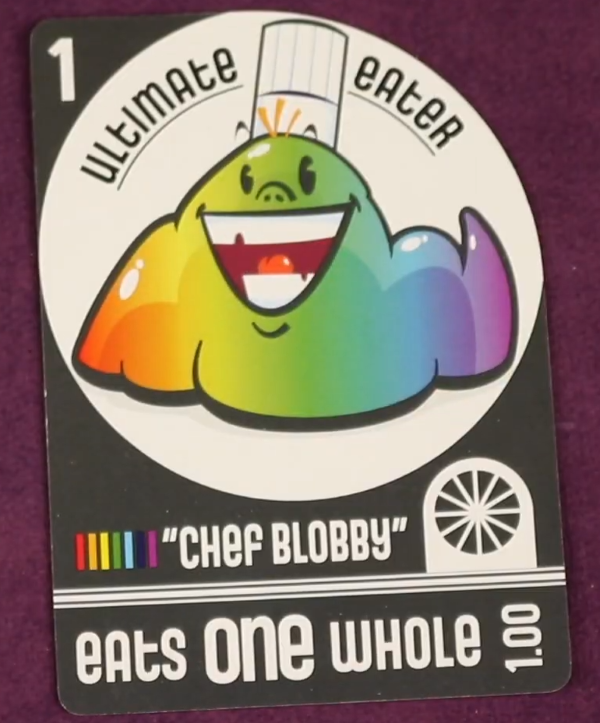 Blobby’s Pizza is a fun and strategic math-card pizza eating game that is played between different cute monster player characters, where you have to eat your way to the highest bill, and get better at fractions, decimals and percentages!

Speaking from my own “parental-opinion”, this game is perfect for any kids of ages 8 and up, and it’s also a blast for any parents that are looking for a fun and reliable way of helping their children to master essential math calculations that include fractions, decimals and percentages, all without the little ones in the family even realizing that’s happening.

If you’re interested in buying it, each set is currently going for just $22. You can order yours online right now, directly from Semper Smart Games’ official shopping page, or alternatively, directly from the company’s corresponding Amazon page.

The Tenzi Game Line brings you a wide range of tabletop games that are super fun to play, and perfect for the whole family, including dice games, block-building games, card-matching games, and many, many more!
Read more
Entertainment

While playing bingo at a physical location can be difficult or even illegal, there are many online bingo websites available for bingo fans to play on.
Read more
Entertainment

The Merge Cube is an App-Enabled AR- and VR-powered Smart Cube that can be used both for teaching and learning, as it allows kids to hold virtual 3D objects in their hands. Overall, the Merge Cube is simply one of the best STEM-leanning tools that you can currently find available, as it allows allow students to learn effectively about many different subjects by having them interacting with digitally created virtual 3D objects for their educational content of choice, which can include Biology, Anatomy, Engineering, the Universe, and much, much more.
Read more
Entertainment

The Nerf Rival Curve Shot Sideswipe XXI-1200 Blaster is a unique and super-fun nerf gun model that can fire its rounds straight, or, via its Rotating 360 Degree Muzzle, have them curved left, right, or downwards, coming equipped with a 12-Round Side-Loading Internal Magazine and a total of 12 Official Nerf Rival Rounds. This super-unique nerf gun model is extremely fun to play around with, and that's mainly thanks to its special and innovative Rotating 360 Degree Muzzle, which basically makes the blaster super fun to play with each and every time, almost like if it’s always your first time messing around with it! All and all, it is simply a blast to participate on a Nerf Gun War with this awesome blaster.
Read more