Tabletop games like dice games, block games and card games are all super fun to play and can provide countless hours of entertainment for all ages. Last but least, since tabletop games are awesome to play together with others, they can actually even bring your family and/or friends closer together. So, if you’re looking for your next tabletop game to try out, consider having a look at the Tenzi Game Line.

The Tenzi Game Line brings you a wide range of tabletop games that are super fun to play, and perfect for the whole family, including dice games, block-building games, card-matching games, and many, many more!

With all that said, we welcome everyone to join us on our detalied review of the Tenzi Game Line, where we’ll be having a look specifically at the company’s TENZI Party Pack Dice Game, as well as to their TENZI’s game add-on package called “77 Ways To Play TENZI”, and also to both the BUILDZI block-building game and to their PAIRZI card-matching game.

Starting with the TENZI Party Pack Dice Game, I’d like to start out by saying that this party pack dice game is based on the company’s most known tabletop game from their TENZI Game Line, which as you probably expected, is called “TENZI”.

That said, the main difference between the basic TENZI game and this party pack is that the TENZI Party Pack Dice Game comes with two (x2) extra sets of ten dice instead of the basic pack’s typical four (x4) sets of ten dice, resulting in a total of six (x6) sets of ten dice, which ultimately allows you to include more family members and/or friends. In addition, you also get brand-new colors for the pack’s dice, as well as a handy Storage Case.

Now, note that this game (“TENZI”) is meant to be played super-fast, and the rules are also extremely simple, which ultimately makes this tabletop dice-game a super fun, very fast and quite thrilling frenzy for the whole family!

Basically, everyone gets ten dice. After those sets of tens dice each are equally distributed between the participating players, someone is responsible for saying: “Go.” Then, right after that call is done, everyone rolls their ten dice at the same time, rolling them as fast as they can. 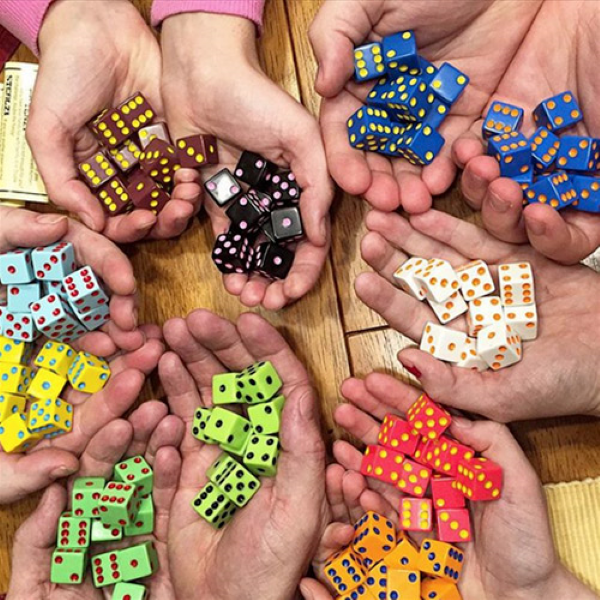 Lastly, the game’s Win-Condition is achieved as soon as someone gets all their dice rolls landing on the same number, for which that specific player then just has to shout out “TENZI”, and then the game is officially over with that player being declared the winner of that round.

Now, I’d still like to note that there are actually lots of different ways to play TENZI (discussed in greater detail right ahead), as this is just the basic and original version of the game.

If you’re interested in buying the TENZI Party Pack Dice Game, each set is currently going for just $24.95. You can order yours online, directly from TENZI’s official shopping page, which you can access by clicking here.

Now, as said just before, there are in fact many different ways of playing TENZI. That’s exactly what this special deck of cards game-pack – called “77 Ways To Play TENZI” – has to offer your entire family, basically working as an add-on package for the basic version of the TENZI game.

That said, the “77 Ways To Play TENZI” package ultimately gives you 77 new, different and super-creative ways to play TENZI. To put it simply, this deck of cards game pack gives you 3 major variations of TENZI (as well as many sub-variations from those), which are Speed Games, Pattern Games, and Non-Speed Games.

So, with this special deck of cards, TENZI now has turn-based card-draws dictating what a player is supposed to do on their move.

Best of all, the package even comes with some blank cards included, which then allows you to come up with some of your own rules to ultimately make your own TENZI variations. With TENZI, there’s no family gathering that can resist a good old’ family fun time!

If you’re interested in getting the 77 Ways To Play TENZI game-pack, each set is currently going for just $9.95. You can order yours online, directly from TENZI’s official shopping page, which you can access through this link.

Basically, players grab a BUILDZI block and start building. The game’s sole goal is for you (the player) to be the first to build your tower. However, you should be careful to not let it tumble, as if that unfortunate event ever happens, you’ll immediately be put behind everyone else, and obviously, will have to start building your tower over from scratch.

Each set comes with 32 BUILDZI blocks, 32 tower cards, and 32 block cards, and there are lots of ways to play. That said, for those looking for slightly harder rules, you could also implement a rule that every player that gets their tower to tumble gets immediately eliminated, instead of having the chance of starting to build their tower over from scratch on the same game.

If you’re interested in buying BUILDZI, each set is currently going for just $24.95. You can order yours online, directly from TENZI’s official shopping page, which you can access by clicking this link here.

Lastly, we have PAIRZI, which is the company’s card-matching game. This card-matching game is extremely thrilling, as it is all about speed. When playing PAIRZI, players have to find the most matching pairs of Critter Cards to win, but what makes this game so exciting is that there’s a twist.

Before you can look for Critter Cards to match, you must roll a pair with your dice. As such, if you roll two 3’s for example, you’re allowed to find 3 pairs of Critter Cards. And right after that it’s straight back to rolling your dice.

Best of all, there are lots of ways to play PAIRZI, so this card-matching game never gets boring!

If you’re interested in buying it, each PAIRZI set is currently going for just $19.95. You can order yours online, directly from TENZI’s official shopping page, which you can access via this link.

The KIBO 15 Home Edition is a screen-free STEAM Robot Coding Kit for young children that gives kids direct access to creative coding by allowing them to decorate, build, and code their own little programmable robot and ultimately bring their envisioned creation to life. Designed as a screen-free programmable robot kit that introduces STEAM (Science, Technology, Engineering, Arts and Math) concepts in a playful way, the KIBO 15 Home Edition Kit ultimately makes for a great STEAM-learning tool for kids. It’s extremely fun, exciting, and interesting for kids to use and interact with, and also awesome to learn from.
Read more
Entertainment

5 Indoor Games to Play at Home with Your Friends

If you find yourself out of ideas to turn a day or night with family and/or friends into a fun event, check out these 5 different Games to Play at Home.
Read more
Entertainment

The Nerf Rival Curve Shot Flex XXI-100 Blaster is a unique and super-fun nerf gun model that can fire its rounds straight, or, via its Rotating 360 Degree Muzzle, have them curved left, right, or downwards, coming with an Integrated Onboard Round Storage and a total of 5 Official Nerf Rival Rounds. This super-unique nerf gun model is extremely fun to play around with, and that’s mainly thanks to its special and innovative Rotating 360 Degree Muzzle, which basically makes the blaster super fun to play with each and every time, almost like if it’s always your first time messing around with it! All and all, it is simply a blast to participate on a Nerf Gun War with this awesome Spring-Action Blaster.
Read more
Entertainment