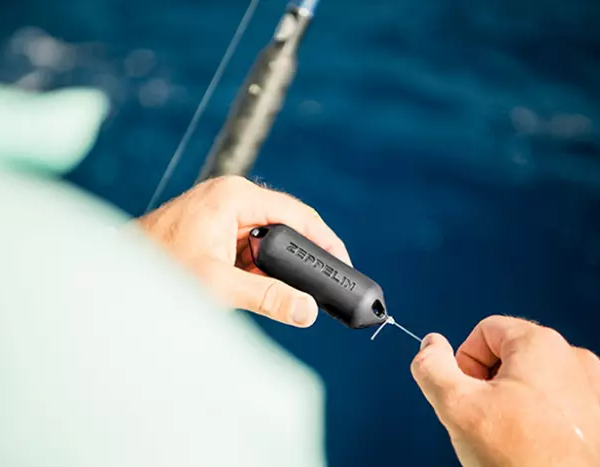 Anyone who enjoys Deep Sea Fishing (A.K.A. Offshore Fishing) has probably heard at some point in time of the very common age-old problem of shark depredation, which is also known in many fishing circles as “Paying the Taxman”. In fact, for many professional fishermen that fish in open waters, “getting sharked” is almost a daily occurrence. That’s because sometimes when you’re out fishing in open waters, there can actually be too many sharks to the point where they simply become too many to handle, thus becoming unavoidable. On that note, many professional anglers end up sacrificing a lot of fish just to fill their limits, and what’s worst is that there are some days where sharks can take up to 80% of the bottom species that anglers have hooked. Nevertheless, there’s a brand-new ground-breaking fishing gadget out there that promises to reduce every fisherman’s “shark threat problems” to a bare minimum. Meet the Sharkbaz Fishing Zeppelin Shark Deterrent Tackle.

The Sharkbaz Fishing Zeppelin is a shark deterrent fishing tackle that’s proven to significantly reduce the number of fish lost to sharks when targeting bottom-dwelling fish species and reeling in your catch(es) from the depths.

Basically, this shark deterrent tackle works based on a patented magnetic technology – which was actually researched and tested by marine biologists on predatory shark species – and that ultimately makes this device capable of overwhelming a shark’s electroreception (meaning a shark’s ability to detect minute electrical fields / signals) by simply creating a highly unpleasant sensation that can stop the ocean’s Taxman in his tracks, all without ever harming the shark(s) as well as without repelling any other fish.

In fact, this is the world’s first shark deterrent tackle, and with it, anglers are offered a replacement sinker that’s capable of deterring sharks and ultimately help them to land their catch.

Thanks to this smart fishing device, you can use the Sharkbaz Fishing Zeppelin as a final solution to protect both your catch and your fishing gear, thus allowing you to have a better time while you’re out fishing in open waters.

So, let’s have a more detailed look at this shark deterrent fishing tackle and check out how it is designed as well as see exactly how it works.

Now, note that while this shark deterrent fishing tackle is designed to replace your sinker on bottom fishing rigs, anglers can also use it to replace the sinker on their normal rigs, meaning your typical surface fishing applications, that is. 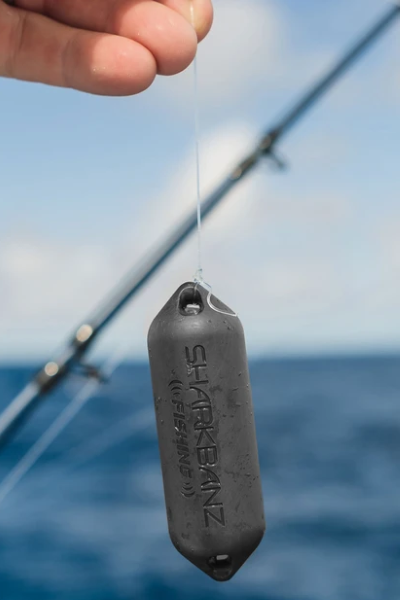 Now, what makes this device work the way it does is its set of built-in permanently high-powered magnets, which is exactly what allows the unit to interfere with a shark’s super sensitive electroreceptors (more on that just ahead). That said, note that this device utilizes no batteries to work, and as such, it is always On (always active), so it also never requires to be recharged.

In addition, this shark deterrent fishing tackle with its own Magnetic Shielded Box for safe storage, just so you can ensure that you can keep it safely stored when not use, which allows you to keep both the unit’s permanently high-powered magnets working properly while simultaneously keeping the unit safely away from any devices that could suffer from its magnetic interference (just in case).

Lastly, I’d also like to point out that the Sharkbaz Fishing Zeppelin is also rated to be both TSA-Friendly and Airline Travel-Friendly, so you can also bring it with you if you’re planning on traveling.

So, we’ll now talk in detail about how exactly the Sharkbaz Fishing Zeppelin works.

How are Sharks affected by Electrical Fields?

I’d like to start by saying that it’s pretty much common knowledge to almost everyone out there that sharks can detect tiny amounts of blood in the water from miles away, but that’s just one of several senses that these predators use to home in on prey. That said, one other great sense that sharks possess is their amazing electroreception, which, in other words, is their ability to detect minute electrical fields.

That’s basically thanks to an organ that sharks have located right in their snout, called Ampullae of Lorenzini, and that same organ is purely specialized for that purpose alone (detecting minute electrical fields). By using this asset along with its lateral line and other senses, sharks can sense the erratic electrical impulses of stressed fish or any other creatures, and then zero in their prey from great distances, even at night or in murky waters (where visibility is limited).

For those wondering just how sensitive is a shark’s electromagnetic perception is, according to a research by biologist R. W. Murray that was published in Scientific American, a shark’s electroreception organ can actually respond to fields as weak as one-millionth of a volt applied across a single centimeter of water.

That exact effect is equivalent to the electrical current that would be produced in the sea by connecting a 1.5-volt AA battery with one pole dipped into New York’s Long Island Sound and another pole placed in the water off Jacksonville, Florida. Theoretically speaking, a shark swimming between these two points could accurately tell exactly when that same battery would be switched On and/or Off.

How does the Sharkbaz Fishing Zeppelin affects sharks?

Now, as said before, this shark deterrent fishing tackle works based on a patented magnetic technology that’s designed to overwhelm a shark’s electroreception, and that’s mainly because this device comes equipped with a set of built-in permanently high-powered magnets that interfere with sharks’ super sensitive electroreceptors.

That said, keep in mind that this shark deterrent tackle is effective at any depth, and the device features a shark-deterrent field range of 3.28 ft. to 6.56 ft. (meaning 1m to 2m).

Now, note that it is exactly because a shark’s electroreception is so finely tuned that the Zeppelin can offer open water anglers such great results. 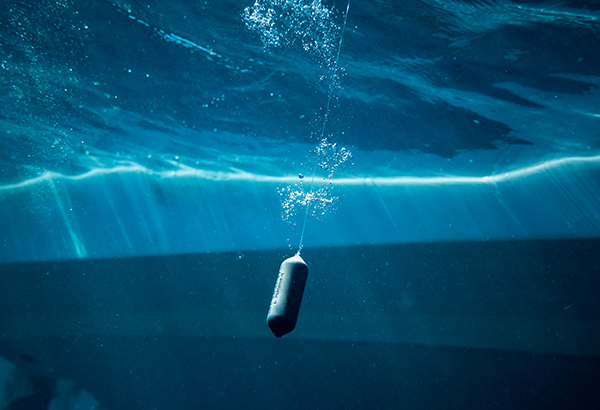 As such, by keeping the device’s primary electromagnetic field controlled to a small, targeted area, the Sharkbaz Fishing Zeppelin has absolutely no effect on other marine life, except for the shark’s close cousin, the stingray.

Nevertheless, this shark deterrent fishing tackle doers not deter other fish species from taking a bait or striking a lure, and yet, as soon as a shark comes close, the electromagnetic field overwhelms its senses, triggering a highly unpleasant sensation that causes “the Taxman” to quickly move away from the device’s generated electromagnetic field, which ultimately just makes the shark uncomfortable (never, ever harming any sharks in the process – just making them uncomfortable and nothing else).

Basically, this cause and effect can be compared to having a bright light suddenly shined in your eyes while you’d be standing inside a dark room. So, it would be an experience that wouldn’t hurt you, but obviously, you’d probably turn away intuitively quite fast.

Ultimately, and according to the company’s many published researches, the Sharkbaz Fishing Zeppelin can significantly reduce the number of fish lost to sharks when targeting bottom-dwelling fish species, reducing shark predation by around 70 percent overall.

Best of all, setting up the Zeppelin is also a very easy task, as this shark deterrent tackle is designed to replace your sinker on bottom fishing rigs. And as mentioned before, you can also replace the sinker on your standard surface fishing rig, if you so choose to do that. 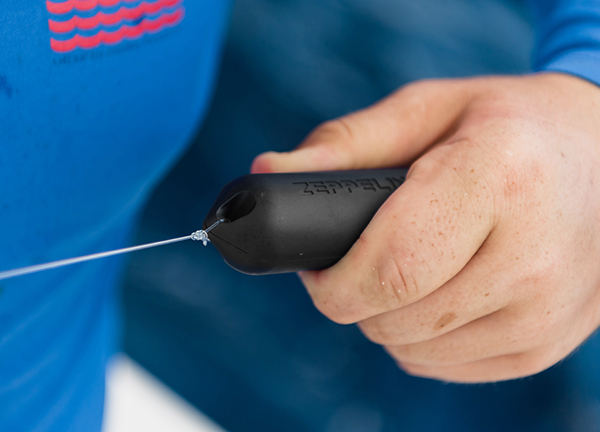 That said, it’s just a matter of attaching the Zeppelin to your rig and you’re good to go. 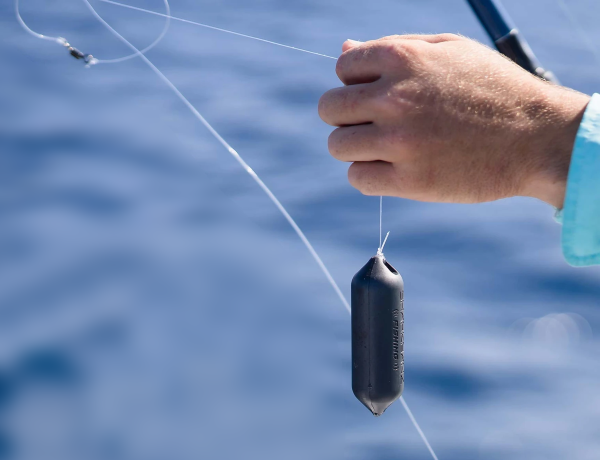 Keep in mind that the company recommends that fisherman have the device sitting between 18-36″ inches (45-90 cm) from the tail of the target fish species.

Embedded below, you can also find the company’s official video for the device’s set up process:

The Sharkbaz Fishing Zeppelin is a shark deterrent fishing tackle that’s proven to significantly reduce the number of fish lost to sharks when targeting bottom-dwelling fish species and reeling in your catch(es) from the depths.

Working based on a patented magnetic technology that was researched and tested by marine biologists on predatory shark species, this shark deterrent tackle can overwhelm a shark’s ability to detect minute electrical fields by simply creating a highly unpleasant sensation that can stop the ocean’s Taxman in his tracks, all without ever harming the shark(s) as well as without repelling any other fish.

With it, anglers are offered a replacement sinker that’s capable of deterring sharks and ultimately help them to land their catch, and that not only helps them to protect both their catch and their fishing gear, but also allows them to have a better time while they’re out fishing in open waters.

That said, whether you’re new to deep sea fishing or a seasoned veteran, the Sharkbaz Fishing Zeppelin can make your time fishing offshore a much better experience overall.

If you’re interested in buying it, each unit is currently going for just $75 each, which not only is quite affordable, but ultimately, is a price that any deep sea fisherman should most likely be willing to pay, as you simply can’t put a price on both your catch and obviously, your fishing gear. You can order yours online right now, directly from Sharkbaz’s official shopping page, which you can access by clicking this link.

The Economic Benefits of Online Gambling, Who Knew?