Nowadays, introducing your kids to coding as well as to the design process that goes into making little robot toys is much easier than even before. Not only that, but giving your kids access to a STEM-based education can teach your children much more than science and mathematics concepts, as STEM-learning can also help to boost their curiosity and creativity, and ultimately give them many other valuable life skills, such as problem solving, critical thinking, and decision making, all while also teaching them the value of acceptance of failure. With all that said, if you’re looking for a STEM-starting kit so that your kid(s) can start learning about the wonders of coding and design, then consider trying out the KIBO 15 Home Edition.

The KIBO 15 Home Edition is a screen-free STEAM Robot Coding Kit for young children that gives kids direct access to creative coding by allowing them to decorate, build, and code their own little programmable robot and ultimately bring their envisioned creation to life.

Just like those wooden programming blocks, these scannable cards are exactly what allows children to program all of the KIBO robot’s actions, and that is what will ultimately get them to learn invaluable STEM concepts such as sequencing and coding in a fun and engaging way.

Now, let’s have a more detailed look at this screen-free STEAM Robot Coding Kit and check out exactly what the KIBO 15 Home Edition Kit comes with, see exactly how it can be used and programmed, and have a deeper look at everything that the kit has to offer your kid(s).

With it, children between the ages of 4 and 7 they can learn invaluable STEM concepts such as sequencing and coding in a fun and engaging way.

Now, since the KIBO 15 Home Edition Kit is designed to help children learn both sequencing and coding in a fun and engaging way, the kit comes with a ton of accessories, which all together make up for everything that parents would expect to have on a STEM-learning – or in this case, a STEAM-learning – kit.

On that note, the KIBO 15 Home Edition contains the company’s very own KIBO robot, which comes together with a drawable face-plate that kids can draw on and customize to their own creative taste with dry-erase markers, as well as a set of KIBO’s wheels and motors.

Not only that, but the kit also includes a programmable KIBO Light Bulb as well as a Sound Sensor Module (can be triggered by sounds such as Clapping) for even more programming options, and both of these accessory Add-Ons (or Mods) can be programmed to be activated simply by using the scannable cards. 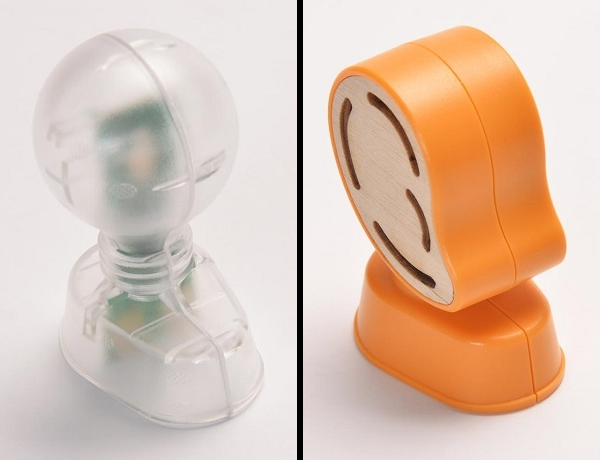 So, as we can see, the KIBO robot itself comes equipped with many built-in Module-ports (or Module-Slots) that can be used to slot-in the many different accessory Add-Ons (or Mods) that the company has available for it.

That said, while the kit only comes with a programmable KIBO Light Bulb and a Sound Sensor Module, you can ultimately get more accessory Add-Ons from the company’s corresponding shopping page, including Modules such as a Light Sensor or even a Distance Sensor.

In addition to that, and as mentioned before, you also get a large set of scannable cards that already programmed with specific actions for the robot, which your kid(s) can use to create their own KIBO programs. 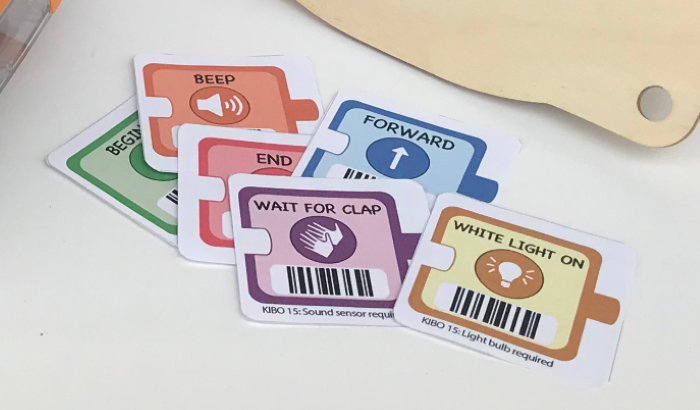 Last but not least, you also get a KIBO’s Art Platform that works together with its included Stage Pedestal, which, after combined, children can also integrate into their KIBO robot to give wings to their own creativity and imagination, thus allowing them to “dress-up” and decorate their KIBO robot with random accessories however they want and in whatever way they see fit, whether that’s a party-hat made of paper, some colorful paper-strips, etc. 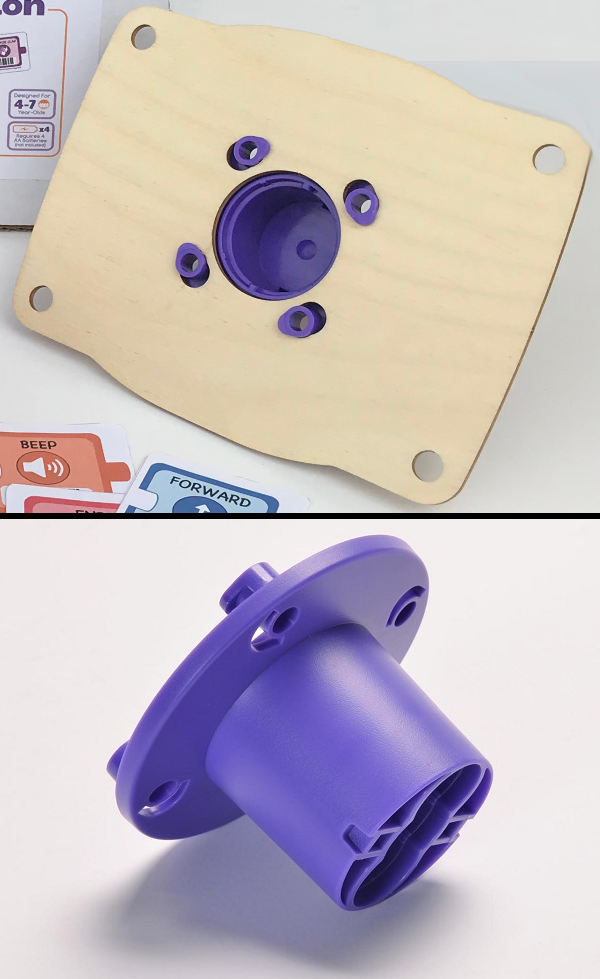 So, to put it in very simple terms, the KIBO 15 Home Edition is a screen-free STEAM Robot Coding Kit that allows for open-ended play, for which, by using the included KIBO robot together with its set of scannable cards, you can ultimately get endless programmable opportunities / options.

Basically, to use the kits set of scannable cards, all you have to do is to slowly and carefully have them scanned via the robot’s built-in Scanner Reading Tool, which is located at the front-side of the robot. Then, it’s just a matter of following each card’s instructions to execute your configured program.

The KIBO 15 Home Edition is a screen-free STEAM Robot Coding Kit for young children that gives kids direct access to creative coding by allowing them to decorate, build, and code their own little programmable robot and ultimately bring their envisioned creation to life.

Designed as a screen-free programmable robot kit that introduces STEAM (Science, Technology, Engineering, Arts and Math) concepts in a playful way, the KIBO 15 Home Edition Kit ultimately makes for a great STEAM-learning tool for kids. It’s extremely fun, exciting, and interesting for kids to use and interact with, and also awesome to learn from.

All and all, I’d give it 5-stars, or in other terms, a 10/10 rating, specifically when it comes to teaching kids the importance of coding and robotics, especially at an early age.

If you’re interested in buying, each kit is currently going for $299.00. You can order yours online right now, directly from KinderLab Robotics’ official shopping page, which you can access by clicking this link.

5 Indoor Games to Play at Home with Your Friends

If you find yourself out of ideas to turn a day or night with family and/or friends into a fun event, check out these 5 different Games to Play at Home.
Read more
Entertainment

The Nerf Rival Curve Shot Flex XXI-100 Blaster is a unique and super-fun nerf gun model that can fire its rounds straight, or, via its Rotating 360 Degree Muzzle, have them curved left, right, or downwards, coming with an Integrated Onboard Round Storage and a total of 5 Official Nerf Rival Rounds. This super-unique nerf gun model is extremely fun to play around with, and that’s mainly thanks to its special and innovative Rotating 360 Degree Muzzle, which basically makes the blaster super fun to play with each and every time, almost like if it’s always your first time messing around with it! All and all, it is simply a blast to participate on a Nerf Gun War with this awesome Spring-Action Blaster.
Read more
Entertainment

The Tenzi Game Line brings you a wide range of tabletop games that are super fun to play, and perfect for the whole family, including dice games, block-building games, card-matching games, and many, many more!
Read more
Entertainment

Microsoft KIN ONE and TWO available starting May 7th