The air we breathe at home can sometimes be of a worst quality than the air we breathe outside, and that’s mainly due to the common allergens and harmful particles that can potentially be floating around and carried by the air indoors. While getting a high-end air purifier equipped with a True HEPA Filter allows you to efficiently filter out those air pollutants and contaminants from the air indoors, what happens when you need to leave your home and get in your car? Obviously, cars are extremely tight and closed spaces, so the air circulating inside them can actually be a serious health concern, as it can be full of micro dust and chemicals that are generated from your cars’ interior materials. Not only that, but external air pollutants like dust, VOCs (Volatile Organic Compounds) and other airborne contaminants can also easily get caught in the air circulating inside your car while using your vehicle’s A/C for air circulation. To prevent this from happening, the best solution would be to get a small and portable air purifier that’s designed to work inside small spaces just like a car. Meet the HENiR Air Purifier.

The HENiR Air Purifier is a portable smart air purifier that can be used to measure and improve the interior air quality inside your car, office, or in any other small spaces where you can’t install a massive air purifier.

Featuring an innovative Three Stage Filtration System that’s composed by a Pre-Filter, followed by an Antibacterial Copper Fiber Filter that’s combined with a high-quality medical-grade True HEPA 13 Filter, which are then finally followed by a UV-C LED that can deliver powerful UV-C wavelengths, this portable smart air purifier can effectively eliminate up to 99.9% of bacteria within any small spaces, as well as successfully sterilize, inactivate and eliminate up to 95.9% of any potential viruses (including the most recent and most dangerous viruses like the SARS-CoV-2 virus that’s responsible for causing the COVID-19 disease).

Thanks to its simple and compact design that allows users to easily fit it within any small place, the HENiR can be left standing safely and unchecked during its entire operation. That not only makes the HENiR Air Purifier effective in purifying the air inside cars, but it also makes it great for purifying the air inside offices, around your deskspace, as well as within small divisions like kitchens, and more.

All and all, this outstanding portable smart air purifier is perfect to effectively sterilize the air within any small space, and you can use it to ensure that you’ll always be breathing fresh air, no matter where you’re planning to go.

Now, let’s have a slightly more detailed look at this portable smart air purifier and see exactly how the HENiR Air Purifier is designed to work.

Starting with the air purifier’s size, the HENiR Air Purifier features a slim, compact, and ultra-portable design, measuring just 3.44 inches in diameter (at its largest side – the top) by exactly 7.87 inches tall.

This air purifier comes with a slick and slim spiral body that ultimately allows it to fit perfectly within pretty much any cup holder of any cars.

Additionally, the air purifier’s outer shell also comes equipped with built-in air holes on its sides, and these ultimately ensure that users never have to worry about spilling any liquids on the device.

Now, moving on to its main components. As said before, this portable smart air purifier works based on a Three Stage Filtration System that’s composed by a total of four different components (for which two of those work together for the same purpose).

The air purifier’s Pre-Filter is then followed by a unique and first-of-its-kind Antibacterial Copper Fiber Filter, and this simply makes the HENiR Air Purifier much safer than any other portable air purifiers that come equipped with those pre-existing standard sterilizing filters, as its absence of heavy metal and harmful substances make this portable smart air purifier much more capable of capturing dust and germs, as well as preventing those from replicating.

Now, as said earlier, the HENiR’s Antibacterial Copper Fiber Filter is also designed to work together with its following component, which is a high-quality medical-grade True HEPA 13 Filter. The combination of its Antibacterial Copper Fiber Filter with its high-end medical-grade True HEPA 13 Filter ultimately makes this innovative Air Purifier capable of effectively eliminating up to 99.9% of bacteria within any small spaces, while also helping to prevent any other microbial organisms from being carried in the air inside your car.

Last but not least, the final component of the HENiR’s Three Stage Filtration System is a powerful UV-C LED, which is designed to deliver powerful UV-C wavelengths that ultimately makes this portable smart air purifier capable of successfully sterilizing, inactivating and eliminating up to 95.9% of any potential viruses that are smaller than 0.3μm (including the most recent and most dangerous viruses like the SARS-CoV-2 virus that’s responsible for causing the COVID-19 disease), as well as to prevent any potential bacteria and other microbial organisms from passing through this final filtration stage.

As many medical articles already suggested during these last 2 years (2020 and 2021), UV-C lights are quite effective in inactivating many different viruses, and this also includes the SARS-CoV-2 virus.

Furthermore, this portable smart air purifier also comes equipped with a built-in PM 2.5 Sensor that’s super-accurate, and the integration of this sensor basically allows the HENiR to accurately measure the air quality inside any small space, whether that’s inside your car or within a small room / division.

On top of that, this compact air purifier also comes equipped with a powerful Custom Manufactured BLDC Brushless Motor that operates at a whooping 8000RPM, ultimately allowing the device to purify up to 24 Gallons (90 Liters) of air per minute at its final Filtration Stage while using its powerful UV-C LED.

Nevertheless, despite its extremely powerful Brushless Motor, this air purifier features a very quiet operation, only working at a very-low noise-level of just 35dB at its lowest operating speed, or even just a maximum of 45 dB when working at its highest operating speed.

Last but not least, and as we all know, the interior of any vehicle can obviously have a humid and unpleasant odor, especially when we leave our cars closed for many hours on end. As such, the HENiR Air Purifier also comes integrated with a Patented Diffuser Fragrance Cartridge that helps to freshens up the air inside your vehicle.

The air purifier’s Patented Diffuser Fragrance Cartridge features an extremely soothing Ocean Blue scent that keeps the air inside your car fresh and purified, which should definitely help to keep each drivers’ mood up.

On a side note, know that this air purifier is electric-powered, and not battery-powered, as it comes equipped with a DC 5V / 1A Power Input at its back-side, featuring a low Power Consumption of just 2.5W.

Lastly, at the very top-side of the air purifier, we also have a built-in LED Touch Screen that not only makes it easy for users to control the HENiR’s different functions (including its Brushless Motor’s operating speed), but also helps to keep users informed about the current air quality inside their car (or inside any small room), which is all thanks to the air purifier’s built-in PM 2.5 Sensor.

Via its built-in LED Touch Screen, users can configure the HENiR Air Purifier to work in one of four different Air Purifying Modes, which are: Auto, Low, Normal, and Turbo.

In addition, just below the air purifier’s built-in LED Touch Screen, we also have an integrated LED Stick just around the edge of its Touch Screen Control Panel that features three (x3) different color-codes that directly correspond to the current air-quality level within the space you’re using the HENiR. 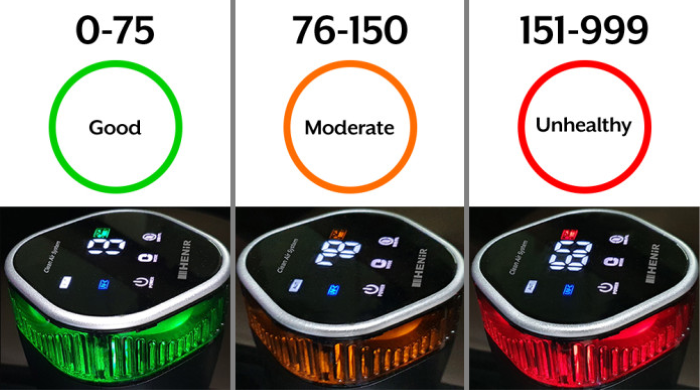 Finally, maintaining this air purifier to ensure that it remains capable of working flawlessly to have it perfectly purifying the air around you is also an easy task.

All the company recommends is that users swap out its filter with a new Replacement Filter every 6 months.

To swap out its internal filter, all you have to do is to hold on to the bottom filter cover and twist it away from the air purifier’s main body.

Then its just a matter of gently twisting the new Replacement Filter in the opposite direction and slowly pushing it upwards at the same time until your have it locked into its position. And that’s pretty much it. Simple, quick, and easy, just as anyone would want.

The HENiR Air Purifier is a portable smart air purifier that can be used to measure and improve the interior air quality inside your car, office, or in any other small spaces where you can’t install a massive air purifier.

Featuring an innovative Three Stage Filtration System that’s composed by a Pre-Filter, an Antibacterial Copper Fiber Filter that’s designed to work together high-quality medical-grade True HEPA 13 Filter to effectively eliminate up to 99.9% of bacteria within any small spaces, as well as a UV-C LED that can deliver powerful UV-C wavelengths for successfully sterilizing, inactivating and eliminating up to 95.9% of any potential viruses (including the SARS-CoV-2 virus responsible for causing the COVID-19 disease), this outstanding portable smart air purifier is perfect to effectively sterilize the air within any small space.

Its compact, lightweight, extremely portable, very, very silent, and most importantly, powerful enough to purify the air inside a car, an office room, around your desk-space, as well as within small rooms like kitchens, and more.

If you’re interested in getting it, all you have to do is to pledge a minimum of $99 to HENiR’s Indiegogo Crowdfunding Campaign, and pledging just a little more to make it $119 will also allow you to get 2 Replacement Filters together with the Air Purifier.

So, if you really want one, consider getting yours now by pledging to HENiR’s Indiegogo Crowdfunding Campaign, as units are limited.