Nowadays, more and more companies are starting to choose to do their business meetings online. That’s not only because of how much more convenient it is for their employees, but obviously, because that’s also a much safer option than hosting those meetings in person in the lights of the recent COVID-19 pandemic that has hit all countries worldwide. Now, for many business workers, it might be hard to know exactly what hardware components to go for in order to be able to participate in future online meetings from their home office, especially when given the fact that there are so many webcams, headsets, and professional microphones to choose from. When taking that into account, the best option would most likely be to go for an all-in-one video conferencing solution; one like the Meeting Owl Pro, that is.

The Meeting Owl Pro is a WiFi-enabled 360º smart video-conferencing camera that boasts a high-resolution 1080p video and great sound quality, which is even compatible with all Video-Conferencing Platforms, including Zoom, Microsoft Teams, and more.

In fact, this all-in-one video-conferencing device was even rated as one of TIME’s Best Inventions of 2020, not only for business workers that are looking for an easier way to perform and attend to virtual meetings, but also for students and teachers alike.

To put it simply, this all-in-one video conferencing device is designed to provide business workers of all sorts with an exceptional video-conferencing experience for all of their business meetings held virtually.

Now, let’s have a more detailed look at it and check out all of the different components that make the Meeting Owl Pro such an outstanding all-in-one video conferencing device.

Starting with the device’s size, the Meeting Owl Pro comes at a sleek and compact size, measuring just 4.4 inches in diameter by 10.75 inches tall.

For its design, the Owl Pro features a cute Owl-like appearance that not gives the device both a fun and discrete look.

Moving on to its main components. At the top-side of the device, we have a built-in 360-degree camera that’s designed to capture anything within your work environment, with its camera boasting a high-resolution at 1080p HD for an outstandingly sharp video-quality.

In addition, the Owl Pro’s Camera is powered by an Intelligence System that gives the device’s 360-degree camera Intelligent Functionalities, including both Auto-Focus and Smart Zooming capabilities.

To be a little more specific, these two smart camera functions are automatically activated to have the device’s 360-degree camera zooming and focusing on whoever is speaking. That said, on a room with multiple users, the device will always know who to frame on its camera’s live-video.

Then, for capturing its users’ voices, this all-in-one video-conferencing device also comes equipped with an Internal Mic System that’s composed by a total of 8 smart microphones, which are designed to capture surround sound in a 360º radius in order to ultimately equalize a user’s speaking volume.

Finally, to reproduce the sound from whoever a user’s talking to (meaning from other participants from any of your video meetings), the Owl Pro utilizes a built-in 360º Tri-Speaker that’s designed to create a fairly loud room sound.

All that ultimately making this all-in-one video-conferencing solution perfectly suitable to be used for large conference rooms as well as for classrooms.

Moreover, it’s also worth noting that all of the Owl Pro’s functionalities are powered by a Qualcomm Snapdragon 605 processor.

Now, for its connectivity, this sleek all-in-one video-conferencing device features a very simple plug-and-play process, which not only makes it easy to set up, but also very convenient to use on any video-conferencing occasion, no matter if it’s for work-related purposes or even just to talk to other family members.

That said, to set it up, all you have to do to use it is to connect the device to your computer via its 6.5 ft. Micro-USB Cable. Then, it’s just a matter of selecting the Meeting Owl Pro as your PC’s defaut camera, speaker and microphone, and you should be good to go.

Furthermore, and as said before, the Owl Pro is a WiFi-enabled 360º smart video-conferencing device, which means that it also features Wi-Fi Connectivity. That said, the device is powered by a proprietary Operative System called Wise OS, which allows users to automatically get upgrades and enhancements for the unit, which are all delivered via WiFi.

In addition, its Wi-Fi Connectivity also gives users the ability to connect 2 Owl Pro devices together for an better video (and audio) coverage of large conference rooms (or big classrooms).

Last but not least, and as said earlier, this all-in-one smart video conferencing solution is compatible with all of today’s Video-Conferencing Platforms, including Zoom and Microsoft Teams, as well as Blackboard Collaborate, slack, GoTo Meeting, Skype, Cisco, webex, and BlueJeans. 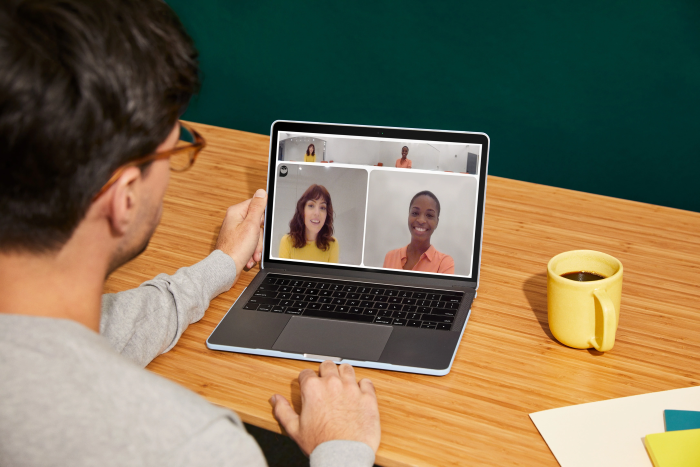 Best of all, the Owl Pro is also tested to work both with Facebook Live and Youtube Live streaming!

So, no matter which video-conferencing platform is your favorite, you can be assured that you’ll be able to use the Owl Pro for it.

WHAT’S IN THE BOX

Inside each package, users will find: their Meeting Owl Pro, the device’s included 6.5 ft. Micro-USB Cable and dedicated Power Adapter, and a Quick Starter Guide.

The Meeting Owl Pro is a WiFi-enabled 360º smart video-conferencing camera that boasts a high-resolution 1080p video and great sound quality, which is even compatible with all Video-Conferencing Platforms, including Zoom, Microsoft Teams, and more.

In other words, this all-in-one video conferencing device is designed to provide business workers of all sorts with an exceptional video-conferencing experience for all of their business meetings held virtually.

With it, you can have the most immersive meeting experience possible, no matter if that’s for hybrid business teams or even for classrooms.

If you’re interested in buying it, each unit is currently going for $999. You can order yours online right now, directly from OwlLabs’ official shopping page.

The Jabra Speak 750 is a portable Bluetooth speakerphone that features full duplex audio, compatibility with leading Unified Communication platforms such as Microsoft Teams and Skype for Business, Bluetooth and USB Connectivity, Dual Pairing, and up to 11 hours of battery life. Engineered specifically to power all of your virtual business meetings with its seamless, premium full duplex audio, this Bluetooth conference speakerphone allows you and your co-workers to hear and be heard simultaneously at any time during an online business meeting, working perfectly for meetings of up to 6 people. All in all, the Jabra Speak 750 makes for an outstanding Audio Conferencing device that's extremely reliable for any virtual meetings you and your co-workers might participate in. By using it, you can ensure that all of your business meetings have fewer interruptions and a better collaboration between the two online parties.
Read more
Office Gadgets

The Ekster Laptop Sleeve is a slim and durable laptop sleeve for 13" laptops and tablets made of premium leather that features a soft leather flap with a secure magnetic closure, 5 Custom Anti-Slip Elastic Storage Slots for carrying your everyday accessories, 2 Secret Pockets hidden at the front-side for storing other essential items, and Cut-Out Indents that allow for charging on-the-go. Designed for laptops, tablets, and tech accessories, this sleek laptop sleeve is made to make your workday seamless and stress-free, no matter if you're working at the office or straight from the comfort of your home. With this modern laptop sleeve, you're ensured to have a better and more convenient way of carrying all of the tech. devices and office accessories that you take with you for work, each and everyday.
Read more
Mobile

The Fauna Memor Havana are ultra-light designer audio Bluetooth glasses equipped with Zeiss DuraVision BlueProtect blue light filtering lenses, 4 high-end USound MEMS micro-speakers and 2 microphones, as well as Touch Sensors in both temples, all while also featuring Bluetooth 5.0 Connectivity, and up to 4 hours of battery life for continuous audio streaming. Requiring no wires, earbuds or open-ear headsets to work, these innovative audio Bluetooth glasses allow you to listen to music, take phone calls, or even interact with your Smartphone's Voice Assistant, all in a completely hands-free manner. All in all, the Fauna Memor Havana allow you to have a more connected lifestyle while simultaneously keeping you fully aware of all your surroundings, with the added benefit of protecting your hearing from the noise-induced hearing loss that earbuds and headphones can potentially cause.
Read more