While many people commonly believe cats to mostly be lazy and laid-back animals that are naturally reserved to themselves, contrary to this popular belief, cats are also curious and playful animals by nature. That’s because felines are well-known for regularly experiencing “zoomies” on a daily basis, which are spontaneous bursts of energy that normally cause cats (as well as other species of felines) to quickly go from a fairly relaxed state of being to a state of maximum energy in a relatively short time frame. Now, the reason why cats experience these bursts of energy throughout the day is because of all the accumulated energy that cats (and other felines) slowly generate from resting and sleeping for a majority of the day. This is exactly what ultimately causes cats to become very active for short-periods of time, before they then feel like having another long nap just shortly after spending all that energy. With all that said, it’s obvious that cats need to have a healthy way to spend and release all of that accumulated energy. What better way than by having them engage in a little playful physical activity, where they can not only have fun, but also exercise a bit. This is exactly what the PetSafe Dancing Dot Laser Toy aims to provide cats with.

The PetSafe Dancing Dot is a battery-powered automatic laser toy for cats equipped with a Certified Class 1 laser-pointer which moves at random and is also completely safe for cats to play with, featuring 2 different Play Mode settings that include a 15-minute One-Time-Play Mode as well as a Play-All-Day Mode that turns the toy on for 15-minute intervals every 2 hours, for up to 6 hours in total, ultimately providing your cat with a total of 3 15-minutes play sessions.

With the help of the PetSafe Dancing Dot, your cat(s) can pounce and play at any time of the day and whenever they feel like doing so, whether that’s right after taking a nap or even at times when they might be feeling a little mischievous.

Now, let’s have a more detailed look at this automatic laser toy for cats and check out exactly how it is designed to work.

Starting with the device’s dimensions, the PetSafe Dancing Dot Laser Toy comes at a fairly compact size, with the unit measuring just 5 inches long by 5 inches wide by 6 inches tall, all while also being reasonably lightweight, as the device weighs a measly 8.15 oz.

In addition, this automatic laser toy for cats also features a fairly minimalist design throughout its compact and discrete spherical white body, along with a durable construction throughout its entire outer shell.

At the bottom-side of the device, we have a quadpod (four feet) stand / base, which allows for the device to have perfect support when placed on top of any flat surface.

Not only that, but at the back-side of the device, there’s also a built-in Rubber Hanging Strap that allows pet owners to hang the device directly from a doorknob or wall-hanger if they’d prefer to do so, rather than having the device on top of their furniture / countertops.

Last but not least, for the device’s main component, we have a built-in Certified Class 1 laser-pointer that’s completely safe for cats to play with, as the unit’s laser-pointer works at a low-intensity level (meaning it generates a weak red-light with a fairly weak wavelength). 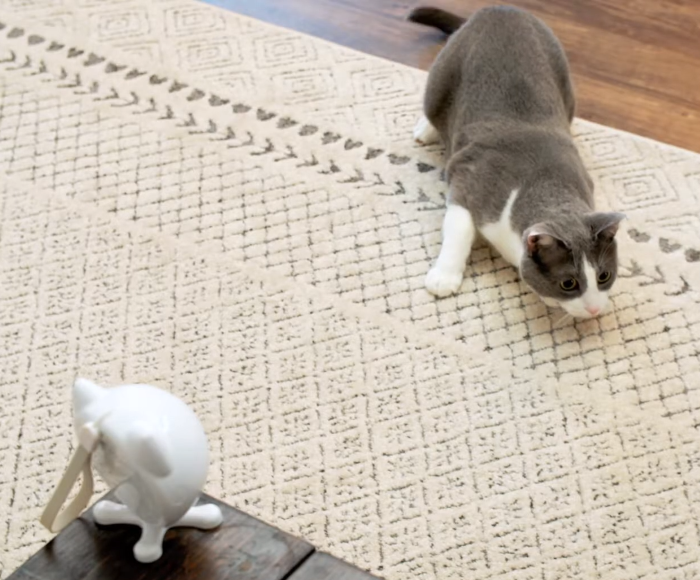 It’s also worth noting that the PetSafe Dancing Dot’s built-in laser-pointer works in a completely automated manner, as it is pre-programmed to move at random based on random patterns and movements that will keep your cat challenged and engaged by stimulating his / her natural instincts to chase, stalk and pounce the laser’s red-dot. 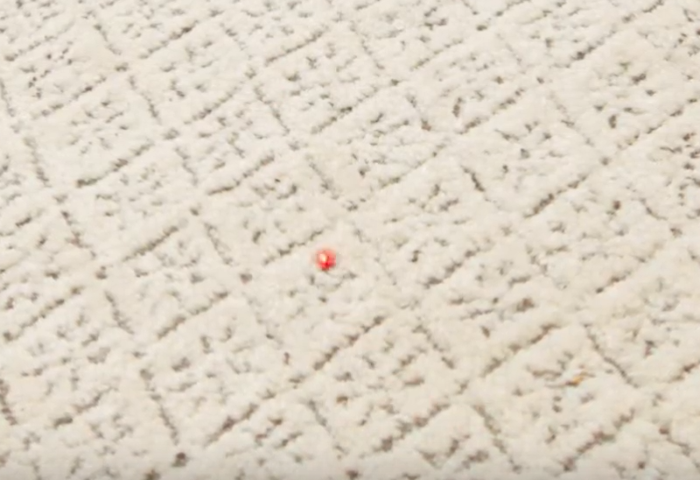 In terms of setting up / installing this automatic laser toy for cats, cat owners will have two different methods available.

Firstly, cat owners can have the device placed on top of a raised flat-surface (via its quadpod stand / base) such as a countertop or any other type of furniture piece. 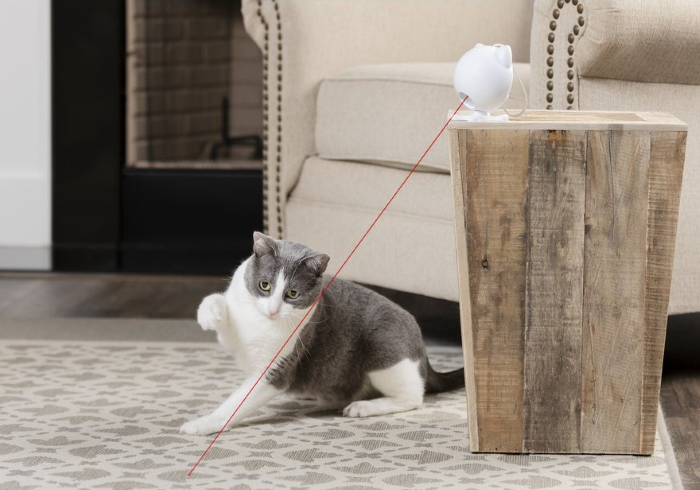 Alternatively, owners can simply hang the device’s Rubber Hanging Strap from a doorknob, which consequently will help the device to create a slightly wider and slightly faster laser movement. 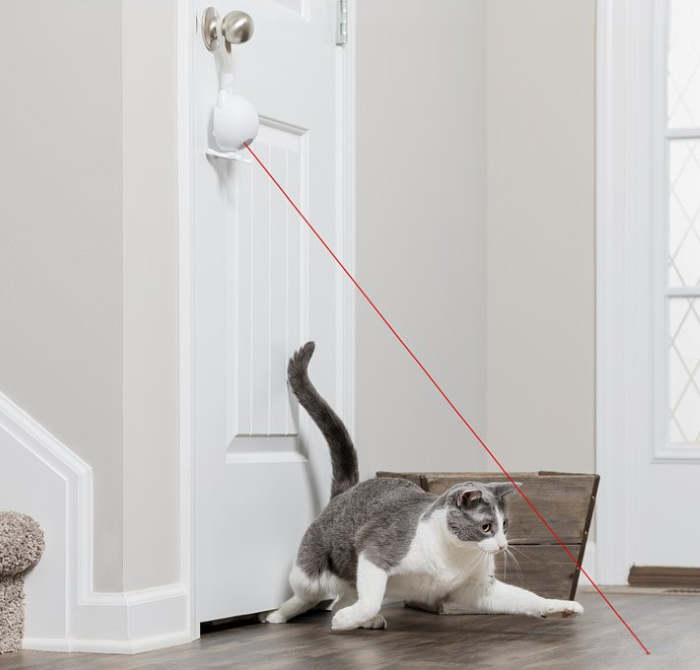 Consider doing this only after your cat starts getting used to (or when he/she is already accustomed) to chasing the device’s laser while having the unit placed on top of a flat surface.

For controlling the device’s operation, there’s a single Power On / Off Button that allows cat owners to turn on the unit, as well as to swap between its 2 different Play Mode settings.

Pressing the device’s Power On / Off Button once will turn On the unit and trigger it to run its first Play Mode setting, which is a simple 15-minute One-Time-Play Mode that will only work one time after the unit is turned On, and after its 15-minutes run-time, will automatically turn Off the device.

Pressing the device’s Power On / Off Button for a second time will activate its Play-All-Day Mode, which will trigger the automatic laser toy to work for 15-minute intervals every 2 hours, for a period of up to 6 hours in total, ultimately providing your cat with a total of 3 15-minutes play sessions. Between each of those 3 15-minutes play sessions, your cat(s) will have scheduled down times of 1 hour 45 minutes each, where they can rest between those play sessions to ensure they don’t become over-stimulated as well as drained of energy.

As a side note and tip for cat owners, remember to move and adjust the position of the PetSafe Dancing Dot every once in a while in order to keep your cat(s) challenged and engaged during their playtime with the device.

Finally, for its power-source, as said before this automatic laser toy for cats is battery-powered, and as such, it requires 3 AAA batteries (which do not come included in the package) in order to work.

The PetSafe Dancing Dot is a battery-powered automatic laser toy for cats equipped with a Certified Class 1 laser-pointer which moves at random and is also completely safe for cats to play with, featuring 2 different Play Mode settings that include a 15-minute One-Time-Play Mode as well as a Play-All-Day Mode that turns the toy on for 15-minute intervals every 2 hours, for up to 6 hours in total, ultimately providing your cat with a total of 3 15-minutes play sessions.

All in all, the PetSafe Dancing Dot Laser Toy can easily keep your cat(s) entertained, even when you are not home. Not only does this automatic laser toy encourages your cat(s) to have a healthy lifestyle on a daily basis, but ultimately, it also provides them with a fun and exciting way to spend their extra energy and stay active.

If you’re interested in buying it, each unit priced at just $21.95. You can order yours online right now, either directly from PetSafe’s official shopping page, or alternatively, you can instead get it from Amazon, if you’d prefer.