Verizon introduces the leader of the DROID army – First Take 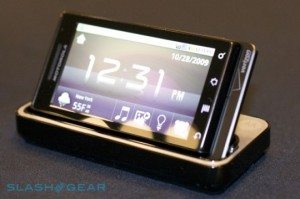 Recently I asked, if a DROID could take on the Death Star? Now, Motorola and Verizon, along with some help from Google launched DROID. I’ve spent the day with a device and here’s what I think so far. First, Verizon was clear that DROID is going to be a family of devices running Android, Motorola’s device will be the only one called DROID, others will be known as the DROID-XXX. DROID is the first Android 2.0 device and the Google branding points to the fact that this is stock Android. And I do mean stock Android: there are zero Verizon services on this device (with the exception of a non-branded visual voicemail app). No VCast. No nothing. One wonders if Verizon were willing to go to this length a few years ago, would the iPhone have landed on Verizon? Android 2.0 is a great update and finally is starting to feel complete. Compared to V1 Android running HTC Sense, it’s a mixed bag. HTC’s UI is lightyears ahead of stock Android in my opinion but the DROID performs so much better than any Android V1 phone I’ve used and is nearly feature complete that it’s hard to recommend a V1x device at this point.

The hardware itself is unassuming with a slider keyboard (MOTO says it’s the thinnest slider on the market) and nice capacitive touch screen. The keyboard itself is a bit of disappointment. I kept making errors (that’s what happens when you aim for thin). Don’t get me wrong, it’s not bad. It’s just not best of breed IMHO. The capacitive screen worked great and the processor is clearly up to the task. Apps launched and switched quickly and in general, there’s none of the usual lag associated with Android. This device is clearly how Android was supposed to perform. There’s a 1,400ma battery inside, although it’s too early to tell what real world battery life will be. Google’s app catalog is here. There’s a decent selection of applications but it comes down to a simple fact, is the app you want here or coming soon? What ultimately will decide platform success is the exclusive apps, deepest and widest app catalog and best of breed apps. Right now, the mobile application center of gravity is elsewhere.

Voice calls sounded great. In Manhattan and Northern NJ where I live, I never dropped a call and 3G worked flawlessly. Charging is via micro USB and there’s two docks available. One will turn the device into a bedside clock/radio/weather companion. The other is optimized for Google Maps. Why Google Maps? Starting with Android 2.0, Google now offers turn-by-turn directions as part of Google Maps. It’s a free service with no charge for use. I used it to get home from the launch event and it worked as well as the dedicated device in my car. This is huge news. Google has totally changed the economics of the GPS market in one fell swoop. No word whether other versions of Google Maps – such as for iPhone or BlackBerry – would get this feature.

The other hot feature in Android 2.0 is Exchange support at last. Once I figured out the slightly cryptic way to enter Exchange information, I had all my calendar, contacts and email on the device. Google integrates contacts into one large contact view (which can also include Facebook contacts as well, but not LinkedIn) but if you use Gmail or Google Calendar, those apps are separate from the core programs. Google does let you connect to more than one Exchange source at a time. Overall, though, Palm’s Synergy is better integrated and more powerful.

Android 2.0 isn’t perfect; for one thing, there’s still no native support for multitouch. That’s just silly with a screen as good as this one. Microsoft, HTC and Palm have added native multitouch support for their devices. It’s silly for Google not have it at this point. There’s other little niggles as well. Contacts can’t be sorted in last name order (as they can in every PIM built in the last 25 years). There’s also still only three screens for apps and widgets (licensees like HTC upped this already). Overall, much improved over V1 but there’s a lot more to be done.[adsense]

Worst feature is that there’s no way to sync media directly from either iTunes or Windows Media. At the moment, this is a drag and drop solution. C’mon? Control sync, control the world and that includes media. Every other platform offers this feature. It’s a major oversight for all parties. TIP, if you do have a DROID, I’m told Double Twist will have DROID support on Macintosh sometime today. Still. This needs to be native.

Bottom line? DROID is a compelling device, at least at this moment in time. The combination of performance, updated Android OS and the Verizon network make a strong combination for users looking for a high end device on the Verizon network. Likewise, Android aficionados will be pleased with the latest version and the best performing version of Android on the market. There’s a lot, however, I miss about HTC’s Sense UI and better Exchange setup, onscreen keyboard, and custom widgets that I’d love to see on Android 2.0 running on faster hardware.

The end result is a device that will likely please consumers that are only considering Verizon’s network (at least until we see more of the DROID family and what it looks like). Despite the hype of the initial iDon’t campaign, it’s not likely to win many converts though from other platforms. Google needs to continue to evolve the OS forward and at the same time build out the app catalog with more apps that are unique to the platform or are showcased best of breed. For now, what we have is a very capable DROID that needs some other family members to keep it company and create a DROID army that could become more platform competitive over time.(Via: Slash Gear)