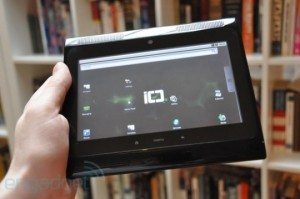 The ICD Ultra 7-inch Tegra T20 Android powered tablet has already been introduced and we have talked a bit about it already. The slick little tablet runs Android and packs in lots of other features like Bluetooth, 3G, and WiFi connectivity.

The little tablet also sports the NVIDIA Tegra T20 chipset. Engadget went hands on with the tablet and the thing looks even cooler sporting the silver speaker grates rather than the all black of the pics we saw previously. The device has 512MB of RAM, 512MB of ROM, 4GB of storage, 2G and 3G radios, and a 1.3MP front-facing camera in addition to the other specs I already mentioned.

Engadget’s hands on was with a prototype version sporting a resistive touch screen, but a capacitive version of the device is coming. The prototype version was running Android 2.0 and the Ultra is expected to sell in the $249 range. We might even see the things at no charge with subsidized data plans.(Via: Slash Gear)