Being completely upfront, we can’t quite bring ourselves to believe that this is actually Nokia’s next smartphone, the N98.  However we’re suckers for a good render and BeGeek reckon they’ve “confirmed internally” that this is in fact a 4-inch smartphone that Nokia intend to launch in time for the holiday 2010 season.

Their source claims that the Nokia N98 has 32GB of storage, and we’re guessing from the single image that it’s a touchscreen device too.  OS looks to be S60, going by the homescreen panels, and BeGeek have heard a €450 price tag too ($619). 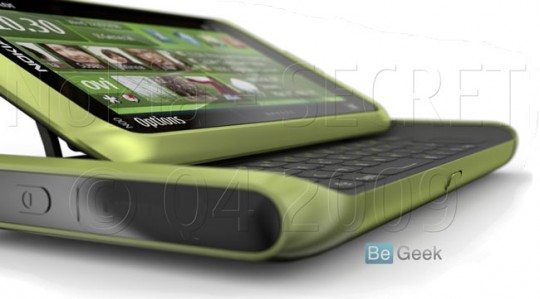 The whole thing looks a little like a Sidekick, which has us moderately suspicious as well, but the keyboard is the same low-profile version we’ve seen on the N97 and N97 mini.  Nokia’s presence at Mobile World Congress is minimal – they don’t have a proper booth, and their press conference is off-site – so we’re dubious as to whether they’ll announce the N98 or indeed anything else in the near future.