The USBCELL is a Ni-MH (Nickel-metal Hydride) battery. Due to this they can be charged up even when the battery has not been fully discharged, without affecting the lifetime of the battery. The USBCELL battery is a 1.2v 1300mAh AA battery. When charging these batteries in a USB port they should take around 5 hours to  reach 90% fully charged, of course this may be achieved in less time if the battery was not fully discharged first. 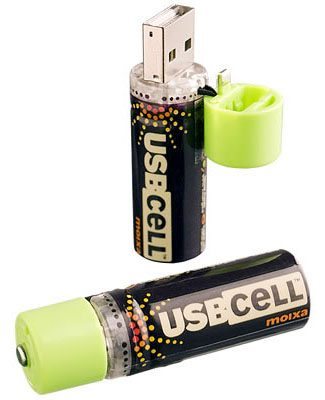 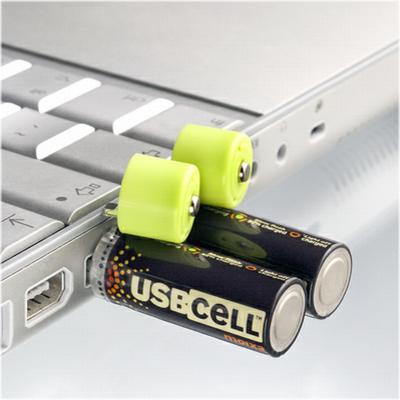 The Geekey is a pocket-friendly key-shaped multi-tool made of Stainless Steel which boasts over 16+ unique functionalities that can quickly and conveniently aid you in many different scenarios. It features a Scoring Tip for cutting and opening objects, a Multi-Head Driving Tip that not only fits most screw- and bolt-head styles but also doubles as a Can Opener Tip, a Serrated Edge, an Open Wrench that also works as a Bottle Opener, a built-in Smoking Bowl and Smoking Pipe, an integrated Linear Edge File, a Ruler and a Protractor, a built-in Bit Driver Hex Pocket, a Closed Wrench, a Bike Spoke Key-Wrench that can also be used as a Wire Bender, and a Wire Stripper with a sharp wedge that doubles as Lanyard Hole for your key-chain. All in all, this pocket-friendly key-shaped multi-tool comes equipped with everything you need to face a multitude of everyday handyman scenarios, no matter if you're simply looking to give a quick-fix to your mountain-bike, or even if you're looking to explore the outdoors and enjoy Mother Nature while always remaining versatile.
Read more
Miscellaneous Gadgets

Is it worth getting an electric car?

If you're considering to get an electric car, then this article can tell you in great detail all the Pros and Cons of owning an EV.
Read more
Miscellaneous Gadgets

The Noisy Clan Wee Stand is an ultra-foldable portable music stand that's extremely versatile, featuring Adjustable Height via Tension-Lock Legs, Tilt-Touch Angle Positioning, Sheet-Saver Tabs, Swivel Clips, and a Central Clip for having music sheets placed side-by-side. Thanks to its revolutionary foldable design, this portable music stand can be easily carried by hand or stored inside a bag and opened up to a full height in seconds, and users can also quickly open it up and set it between a compact tabletop form and a full standing height position. All in all, the Noisy Clan Wee Stand is perfect for all musicians, no matter their level of expertise, as it was ultimately designed to let musicians get straight to playing their art.
Read more
Miscellaneous Gadgets

The ARROE Smart Charging System is a portable App-enabled 20000mAh power bank that can be used to charge your laptop and all of your other devices, featuring multiple connection options as well as both Wired and Wireless Charging. Best of all, since this smart charging system is App-enabled, you're also offered an Optimized Charging feature that not only helps you keep the batteries on your devices charged between 20%–80%, but ultimately also allows you to extend the lifespan of your devices' batteries. The App also allows you to monitor and manage all your devices' battery-levels, and the App even provides you with Charging Notifications and Reminders via your Smartphone to respectively let you know that you're devices are either done charging or that they need to be re-charged when their batteries are detected to be running low on power. All and all, this smart charging system is compact, ultra-portable, and very easy to use thanks to its Smartphone Companion App. It's perfect for any digital workers that a spend most of their time on-the-go.
Read more

Amazon Drones May Operate out of Moving Trains