WiMAX Growth Explodes Accept in US 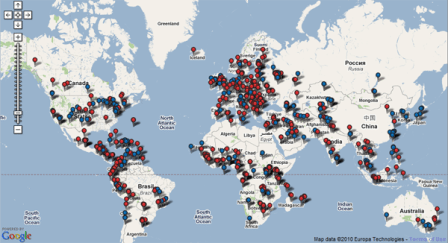 WiMAX in the U.S. is growing, but certainly not at the speed with which the rest of the world is experiencing. Clearwire, the U.S. primary privader of WiMAX, is doing its best to boost interest statewide, however, the explosive growth with Asia Pacific and European markets dwarfs the efforts the U.S. is making to integrate this technology across the country. Below are statistics compiled by the WiMAX Forum:

Clearwire states that it intends to blanket areas encompassing 120 million people with WiMAX by the end of  2010. If they can do this, Clearwire will have a large advantage and marketshare over its competitor, Verizon Wireless.   Verizon is only beginning to roll out LTE commercially on a small scale. We should see things becoming competitively interesting between the two giants in about a year. (www.clearwire.com, www.verizonwireless.com)