Sanyo’s Xacti line-up is welcoming a new addition to the family, but this time it’s not a video camera. Announced earlier this month the new Xacti Sound Recorder is designed for users who require a high-end audio recorder, like journalists who record interviews on the go. But it’s more than just a regular sound recorder, because when it’s in the accompanying cradle/speaker dock, it can record radio broadcasts. 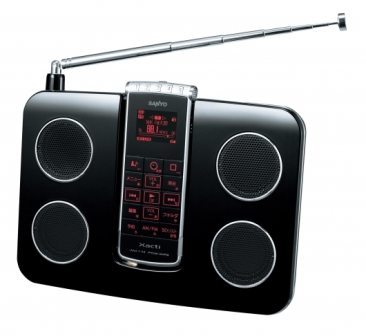 If you want to record sounds from other sources, there’s a line-in jack and connecting cable that can accommodate that too. This works well for those who want to digitize music from old cassettes or similar external sources.

Audio is recorded in WAV/MP3 format to a micro SD card (a 2GB card comes included), making file transfer and storage quick and easy. The Sanyo Xacti Sound Recorder has some native editing features that allow you to split and cut files without even using a PC.

The Xacti Sound Recorder is less than half an inch thick, about 11mm. and weighs arund 2.3 ounces. Sanyo bills the recorder as the world’s lightest.

Set to go on sale in Japan on April 21 for around $320, no word yet on whether or not there are plans to sell it in the U.S.