Microsoft’s Street Slide Project is a bit different from Google’s Street View. Instead of clicking again and again to get down a street, you simply hold and zoom into whatever direction you want to head in. And there’s a nice panaramic option for viewing a city block. 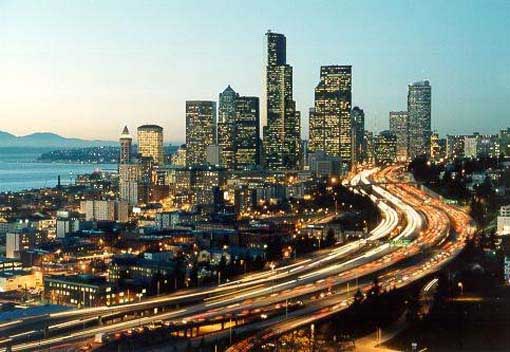 Mok Oh, founder of EveryScape, a Cambridge, MA, startup that captures panoramic imagery of buildings from the inside and outside, says Street Slide could make it easier for users to explore an area. “People using street-side imagery are very often trying to work out where the businesses are or look for things that interest them,” Oh says.

“This can really make an impact on a mobile device,” says Cohen, whose group has already made a version of Street Slide compatible with the iPhone. “It broadens out your visual sense to cover a two-block radius.” For example, he says, a person in an unfamiliar city could rapidly scan nearby streets for a café worth visiting.

“Being able to visually scan a street is particularly useful in built-up areas, where interference from buildings can limit the accuracy of GPS location fixes”, says Cohen.

Oh agrees, but points out that improved image-based mapping would benefit from better GPS location. “Geolocation accuracy was not that important when people were looking only at maps, but when you go down to the level of the street, you need a lot more [precise] information,” he says. Today, the location of many businesses–in the geolocation databases used by navigation devices and online maps–are estimated by uniformly spreading street numbers along a block.

EveryScape currently offers panoramic imagery from inside some 1,300 Boston-area restaurants via an app developed using the Bing Maps software development kit. “For seamless integration with street-side imagery, we want to link our interior images to the entrance point, the door–not just roughly where the premises are,” says Oh.

Hopefully this will be rolled out across the U.S, with Bing leading the charge.