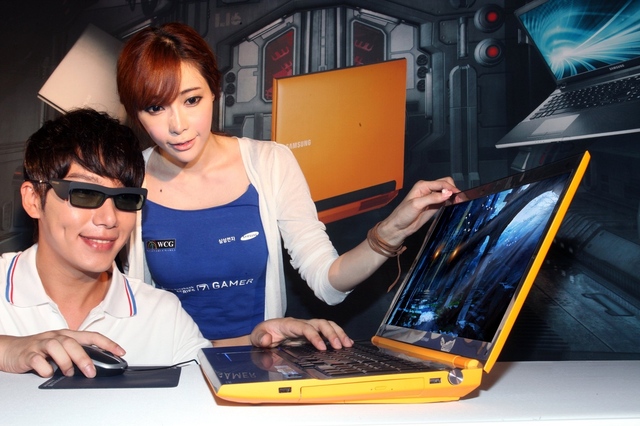 The Samsung Series 7 Gamer laptop is getting a 3D update to its powerful and lovely screen.  The refreshed device is being dubbed as the Series 7 Gamer Yellow  3D, and it’s very sharp with its bright yellow finish. The new over-sized notebook will contain a AMD Radeon HD 7870M GPU and a 14.3-inch SuperBright 3D LED display.

The new guts of the device will also split its twin drive bays between a 1TB HDD and a fast-booting 128GB SSD.  There’s no word yet on availability.  All we know is that Korean customers can grab one on August 14th for 2.99 million Won, which converts to around $2,643 American dollars.

Check out the video and official release below…

Fully 3D game performance, upgrade to the latest specifications for the implementation

to implement the existing “Series 7 gamer Yellow 3D ‘all parts of the core is characterized by a strongly upgraded.

The refreshed model launches with three three-core processors, the Intel i7-3610QM applied, and second-generation processor, the battery performance compared to the reaction rate has been improved and can play more vividly.

In addition to the existing 1TB of additional storage space, 128GB SSD applied to dual-boot speed by integrating the existing storage Improvement in 19.1 seconds and 11.36 seconds, including 40% of storage space to improve the rate of reaction is characterized by widening.

In addition, a series of seven players in previous years’ two thousand and twelve World Cyber ​​Games (WCG 2012) ‘as the official game PC Has been selected representative of Korea in a preliminary selection has already FIFA12 gamers are used in sport received great response. The Gamers Series 7 is coming August 17 ​​to 19 in Cologne, Germany WCG2012.  Samsung European Encounter contest is in progress at the WCG2012, including qualifying and elimination rounds nationally representative, is expected to be used in the Grand Final.
WCG2012 Grand Final coming Nov. 29 to Dec. 2 kunsansieseo is scheduled to be held in China.   The Series 7 gamer Yellow 3D ‘domestic market and the August 14 price is $ 2,990,000.

droppTV is the first-ever shoppable video streaming platform that lets its users shop their favorite artists’ looks from their Music Videos. At the intersection of music, fashion and culture, droppTV lets fans watch new videos including the hottest hip-hop video debuts, and click & buy products their favorite artists are wearing in them, all in real-time and all without ever leaving the video.
Read more
Computers