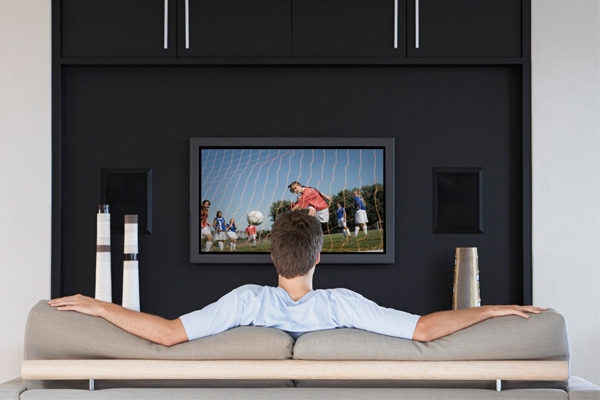 By Ron Marr for The Workbench Life

One of the best aspects of bachelorhood is that my entire house is a man cave. My walls — 60-year-old slabs of dark oak — are adorned with classic guitars, treasured shotguns, and framed photos of beloved dogs, past and present.

But, like most man caves, the focal point of my sanctum sanctorum is the TV. People scoff at my TV and call it the technological equivalent of a butter churn. So what if it’s a 5-foot-tall, 300-pound rear-projection antique twice convicted of steroid abuse? It’s HD equipped and contains massive Dolby speakers that shake the rafters.

If you prefer something a bit more up-to-date, here are your options:

Plasma TVs acquired a bad rap because the screens are reflective. Put them in a dark room and they’re classic. Moreover, the picture looks the same from every angle. That’s important when watching Sports Center or the utter carnage of The Outlaw Josey Wales.

Most conventional flat-panel screens are LCD, ranging from $250 or less for a 32-inch model to more than $3,000 for 52 inches and larger. The problem with LCDs is viewing angle: the picture usually deteriorates unless you’re directly in front of the screen.

Video experts claim that LED sets (standard LCD with LED lighting on the screen’s edges) mitigate this problem. The new OLED models feature curved screens that make you feel like you’re in the midst of the televised action. They also make you feel poor, since a 55-inch model sells for well over $10,000.

Screen size is subjective, depending on eyesight, personal preference, and how badly you wish to impress your friends. The optimum screen-to-viewer ratio is calculated in thirds. If your couch is 10 feet (120 inches) from the TV, purchase a 40-inch model. Also, center the screen near eye level when sitting. That’s usually 4 feet, unless your name is Tom Thumb or Goliath.

Even the most helpful and knowledgeable TV salesperson wants you to spend as much as possible. Keep the following in mind:

1. Have the salesperson switch the set to “home” mode, rather than “retail.” Retail is brighter. Also, tune to a less colorful, non-sports channel. View the TV from different angles.

2.  Shop around and negotiate with reckless abandon. With price quotes in hand, ask for a “meet or beat” guarantee.

4. Decline extended warranties. LCDs and plasmas have an extremely low repair rate during their first three years of use.

5. Check the “Energy Guide” label. An LCD TV uses almost 50 percent less energy than a plasma TV. Ecologically minded buyers who enjoy a sharp, crisp picture can literally have it all with an Energy Star–compliant LED TV. Those sets are 40 percent more efficient than their LCD counterparts, and contain no mercury. (The world still awaits an Energy Star–compliant tuna).

Like this article?
Get more by following us @WorkbenchLife or liking us on
Facebook at The
Workbench Life.

Ron
Marr is a long-time woodworker and luthier whose
work can be seen at marrsguitars.com.  He is also a frequent
contributor to The Workbench Life.