This next gadget is perfect for any tech-enthusiast that’s deeply connected to their family. That said, if you’re looking to ditch those old-fashion picture frames so that you can finally open up some space at your countertops, then consider doing a Smart Home upgrade with the Nixplay Smart Photo Frame.

The Nixplay Smart Photo Frame is a smart 15.6-inch digital photo frame that features a Full HD 1080p display screen, 1GB of RAM and 16GB of Storage Capacity, as well as In-App controls and compatibility with both Amazon Alexa and the Google Assistant.

Supporting both pictures and videos, this smart digital photo frame would make a great addition to any Smart Home.

Not only that, but by using it together with its proprietary Smartphone Companion App (called the Nixplay App), you can quickly and easily connect the frame directly to many different platforms, including Google Photos, Dropbox, Facebook and Instagram, and as such, you’ll be able to display any of your uploaded pictures on any of those platforms.

Now, without any further ado, let’s have a more detailed look at this awesome smart digital photo frame and check out its design, and see everything that it has to offer you.

Thanks to its compact size, you’re able to set it up just about anywhere within your countertops, all while its gorgeous, yet ultra-minimalist design allows it to blend in with pretty much any choice of home decor that you’re currently going with.

Now, onto the frame’s main component. Smoothly integrated into the frame, we have its Full HD IPS display screen, which boasts a 1920×1080 resolution, a 16:9 aspect ratio, and a brightness level of 300 cd/m2. 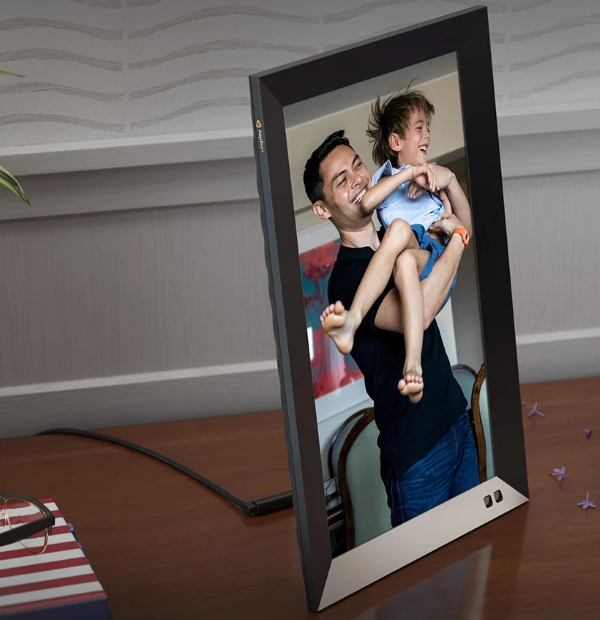 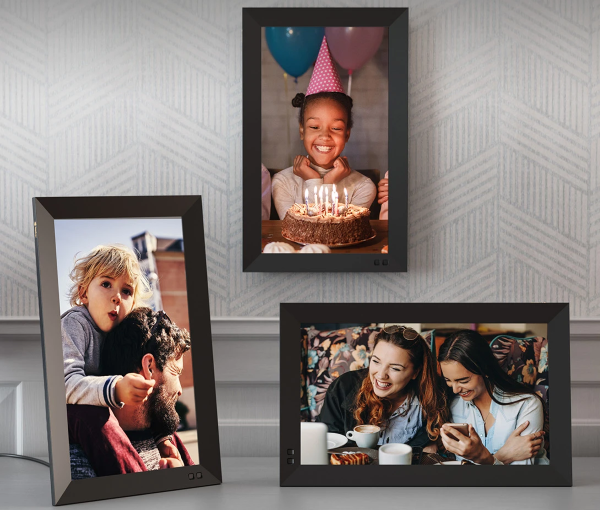 Not only that, but this smart digital photo frame also combines a built-in Hu-Motion Sensor with a built-in Infrared Sensor (and there’s also a G-Sensor) that accurately work together within an active range of  8.20 ft. (2.5 m). 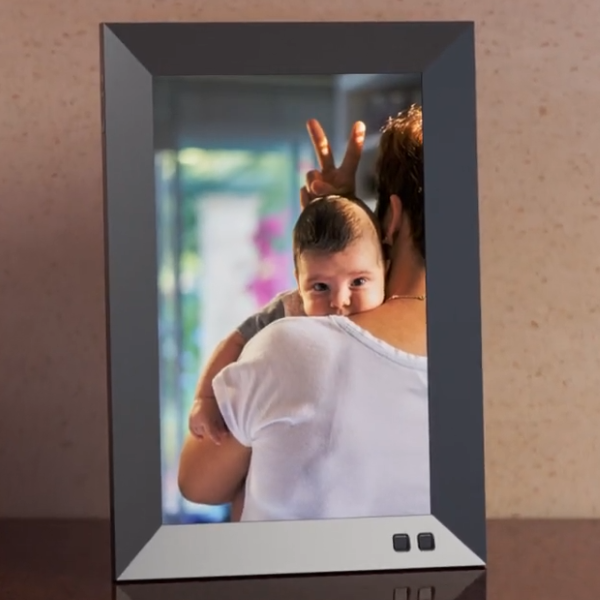 Basically, these sensors allow the frame to detect any surrounding activity, thus making it able to automatically turn itself On/Off (and this ultimately allows you to save some money on your power-costs / energy-costs). 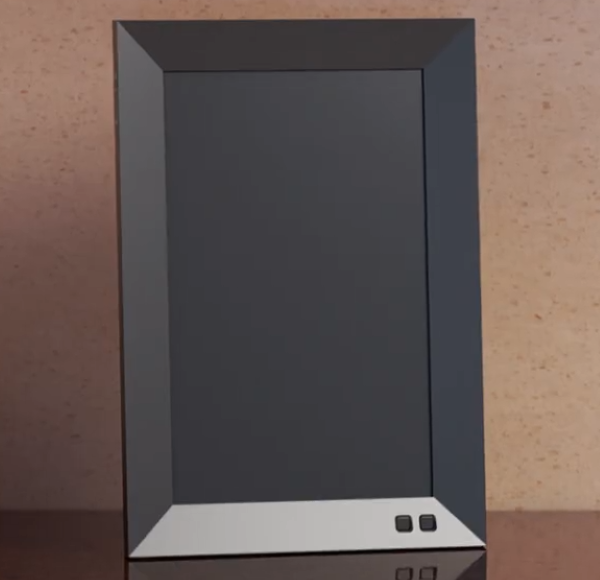 Now, as mentioned before, this smart digital photo frame is capable of displaying both photos, as well as high-quality videos. Speaking about having the frame displaying photos, it’s worth to mention that JPEG/JPG is the frame’s supported Photo Format, so keep that in mind when saving up your photo-files.

As mentioned before, this frame features 1GB of RAM and exactly 16GB of Storage Capacity, so you also have quite a bit of space to store all of your digital photos and video-files.

Additionally, for any time that the photo frame is displaying a video, the Nixplay Smart Photo Frame is also capable of playing that video’s corresponding audio file, and that’s all thanks to its set of two (x2) 2W Speakers.

Lastly, right at the back of the unit, we also have its dedicated Power Cable, which is very well constructed and also easily malleable, working not only as its power source (obviously), but also working really well as the frame’s dedicated stand (sort of like a kickstand, but without the physical presence of one), and that’s basically thanks to its cable’s built-in rubberized part, which can be easily found integrated along its Power Cable. 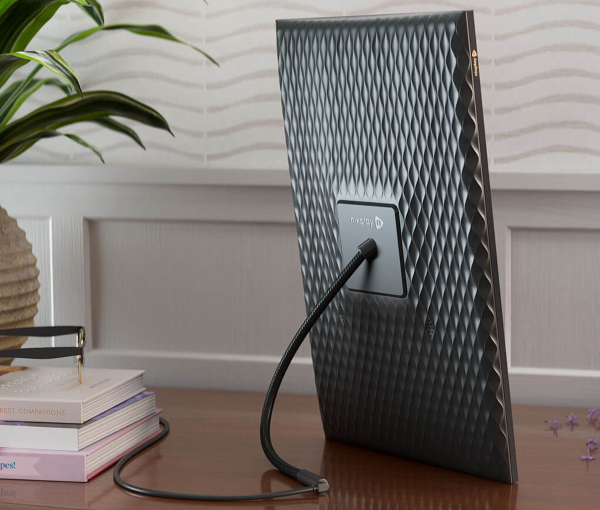 All of the frame’s operations run extremely smoothly on the company’s NixplayOS 7 Operative System.

Now, since this smart digital photo frame can be controlled with your devices via its the Nixplay App, it also features Wi-Fi Connectivity (supporting the most common standards – 802.11 b/g/n).

As mentioned before, you can use the frame together with its Smartphone Companion App (called the Nixplay App), which is available to download for free for both iOS and Android devices.

Via the App, you can quickly and very easily connect the frame directly to many different platforms, including Google Photos, as well as Dropbox, Facebook and even Instagram. Then, right after connecting your Nixplay Smart Photo Frame to your chosen platform, you can have the frame displaying any of your uploaded pictures on that same platform.

By using the App, you can also conveniently create your own playlists for photos and videos, just so you can easily have the frame displaying your favorite moments by any specific order.

Lastly, the App also allows you to configure the frame’s several Picture and Video Display Settings, as well as to receive and send photos between friends and family that you can then respectively have displayed in your frame or in theirs.

As mentioned earlier, this smart digital photo frame also works with both Amazon Alexa as well as with the Google Assistant, which basically means that you can use it together with your favorite Voice Assistant to have it displaying any photo or video playlists that you want by using simple Voice Commands. 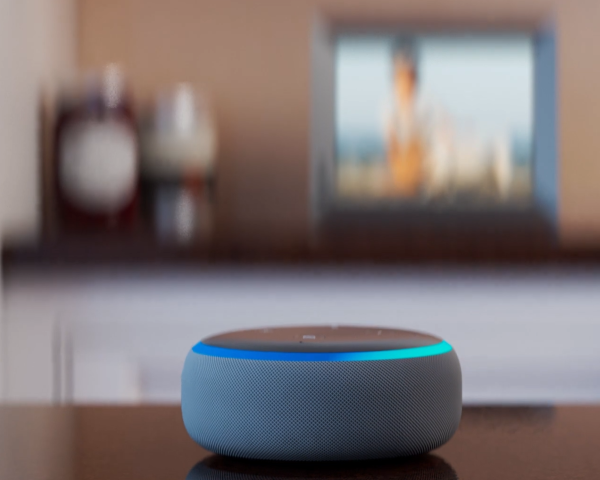 The Nixplay Smart Photo Frame comes neatly packed inside a sturdy cardboard box that comes together with a second covering layer that’s supposed to be slid away from the main package. 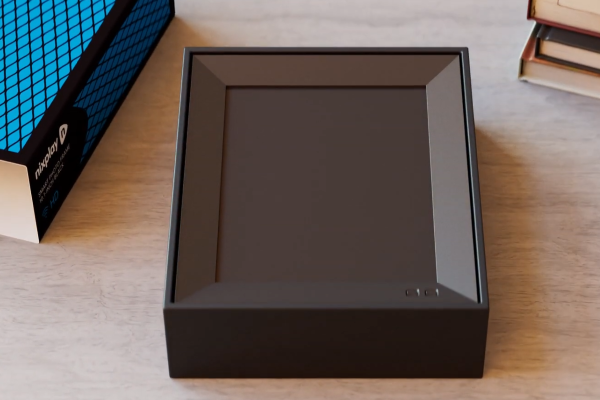 Inside each package, users will find: their Nixplay Smart Photo Frame (15.6-inch frame), the frame’s dedicated Wall Adaptor with US plug, an included set of Wall Mounting Screws and Wall Mount Guide (for those looking to wall-mount the frame), an included Infrared Remote (used to control the frame’s On/Off functions as well as its displaying functions, to skip between photos and videos, and to regulate the frame’s overall Audio Volume), and the frame’s Quick Start Guide. 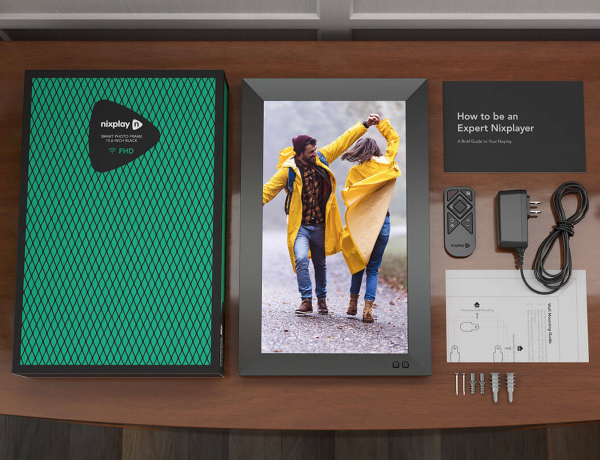 The Nixplay Smart Photo Frame is a smart 15.6-inch digital photo frame that features a Full HD 1080p display screen, 1GB of RAM and 16GB of Storage Capacity, as well as In-App controls and compatibility with both Amazon Alexa and the Google Assistant.

Overall, this smart digital photo frame makes for a great gift for any family member that loves to cherish the moments spent together with everyone in the family. The frame’s App also makes it very easy to configure and use on a daily basis.

If you’re interested in buying it, the Nixplay Smart Photo Frame is currently discounted from its normal price of $319.99, with each unit now going for just $289.99 (saves you $30). You can order yours online right now, directly from Nixplay’s official shopping page, which you can access via this link.

The IMILAB Smart Video Doorbell that's boasts a IP66 Weather-Resistance construction, while also featuring a 4MP Camera with Ultra Clear Night Vision functionalities that's capable of recording at 2.5K Video Resolution in a 150º Ultra-Wide FOV, a Full Duplex 2-Way Audio System with Noise Cancellation, Wi-Fi Connectivity, Voice Assistant support for both Amazon Alexa and the Google Assistant, and up to 6 months of battery life. In addition, this smart video doorbell also comes with a Wi-Fi HUB Station that boasts a built-in Local Storage via the use of a MicroSD Card (up to 256GB) to provide homeowners with a local-storage option for storing the system's recorded video-footage, along with an optional 3-Months (i.e. 90 days trial) Could Storage method that allows homeowners to store up to 30 days of recorded video-footage. All in all, the IMILAB Smart Video Doorbell makes for a great all-in-one smart video doorbell system, as it integrates all the home-security and quality-of-life functionalities that you'd want to have on a modern video doorbell.
Read more
Home Gadgets

The Ghost SmartBed 3D Matrix is a 7-layers luxury smart air mattress that combines patented cooling technology with Adjustable Medical-Grade Air Chambers and Smart Biometric Sensors integrated throughout 5 Individual Body Zones which ultimately allow for Customizable Firmness Settings via the GhostBed App. Best of all, via the GhostBed App, users can also accurately track different sleep stats, like their different sleep stages, as well as track how many breaths they performed per minute during each of those sleep stages. All in all, this luxury smart air mattress makes for a great choice of bed mattress for anyone who want's to personally customize their sleeping experience and/or track their sleep data.
Read more
Home Gadgets

The bonoch Nursery Bundle consists of a smart baby and toddler nursery kit that includes both a smart video baby monitor called the bonoch Baby Monitor and a 3-in-1 smart baby nursery night light, white-noise machine, and a smart clock called the bonoch OK-to-Wake Clock. The bonoch Baby Monitor is a hacker-proof smart video baby monitor equipped with a high-end camera lens capable of recording 720p HD Video with 355° pan, 120° tilt, 4x Zoom and Night-Vision functionalities, along with a 2-Way Audio-System, for which parents can then watch and talk with their baby by using the included 5" HD LCD Color Display via a no-Wi-Fi 2.4GHz FHSS wireless connection within a 1000 ft. range-coverage, as well as a Movement Sensor, an Audio Sensor, and a Room Temperature Sensor. The bonoch OK-to-Wake Clock is a 2-in-1 smart baby nursery night light and white-noise machine outfitted with 25 different soothing sounds that's designed specifically for newborns in order to ensure a good night's sleep, while later working as a time-to-rise training device as your child / children get older, featuring a built-in Child Lock, Wi-Fi Connectivity, In-App Controls, and Voice Assistant support for Amazon Alexa and the Google Assistant.
Read more
Home Gadgets

The Sensibo AirQ is a smart air conditioner controller equipped with a built-in air-quality sensor that's capable of detecting TVOC (Total Volatile Organic Compounds), as well as high-levels of CO₂ (Carbon Dioxide) and Ethanol in your air indoors, while also featuring Wi-Fi and Bluetooth Connectivity, Voice Assistant support for Amazon Alexa, Google Home and Apple HomeKit, and full-compatibility with IFTTT and SmartThings for Smart Home Integration via an Open API. All in all, this 2-in-1 smart air conditioner controller and smart air-quality sensing device allows homeowners to make almost any standard Air Conditioner unit(s) smart in order to control their AC from anywhere via their Smartphone, while simultaneously enabling them to monitor their indoors air quality as well as track any potential indoor pollutants.
Read more