As we all know, life tends to get quite busy. Between your typical daily commute, shopping for groceries, keeping up with the house chores to have your home tidy, and even doing your weekly laundry, there isn’t much time left to think about the smaller things… like plants for example. That said, for those who are passionate about plants, there are usually two problems that you’ll commonly have to deal with when caring for your plants – forgetting to water your plants, or contrarily to that, watering your plants too often. So, if you’re looking for a reliable way to fix those two very common plant-caring problems for the rest of your life, then consider trying out the Quench.

The Quench is a smart plant-watering sensor system that’s able to detect exactly when your plant needs water, for which the system will then notify you with a gentle audible tone.

So, let’s have a more detailed look at this smart plant-watering sensor system and check out exactly how the Quench is built and see exactly how it works.

Starting with the Quench’s very simple and ultra-minimalist design, this smart plant-watering sensor system has a very simple look to it that ultimately allows the system’s probe to almost go completely unnoticed.

Now, it’s important to note that this smart plant-watering sensor system works solely based on its one single moisture-detection probe unit, which features a very sturdy and ultra-durable construction that ultimately makes the system’s probe totally resistant to obsolescence.

In addition, since there are absolutely no Apps or Communication Protocols whatsoever that could potentially become outdated, the Quench can ultimately last you for decades if used as intended.

Moving on to the Quench’s built-in components. When observing the system’s probe a little bit closer, one of the first things that you’ll probably notice are its Corrosion-Resistant Sensors, which are made from reasonably thick corrosion-resistant materials.

In other words, the Quench’s probe comes equipped with Coated Metal Alloy Contacts that are both resistant to corrosion as well as capable of accurately detecting soil moisture via an Advanced Moisture Detection Algorithm, which is exactly what allows this little “gizmo” to work as a reliable smart plant-watering sensor system.

Additionally, since different plants tend to have different watering needs, the Quench was also designed with all plant-species in mind, meaning that it was designed to work with them all. As such, this sleek smart plant-watering sensor system can ultimately be used for water-loving plants (like ferns) all the way to dry-loving plants (like succulents).

That said, its smart moisture-detection probe also comes with a depth-scale integrated onto it that ultimately makes it easier for you to accurately set it at the perfect depth that best suits each of your plants watering-needs. 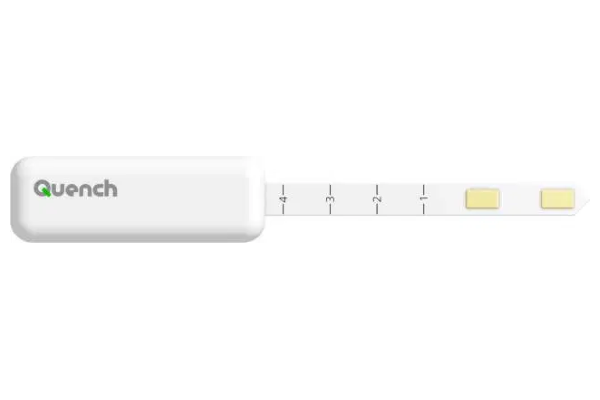 Now, as mentioned before, the system’s smart moisture-detection probe will then notify you with a gentle audible tone whenever it detects that your plants need water once again. 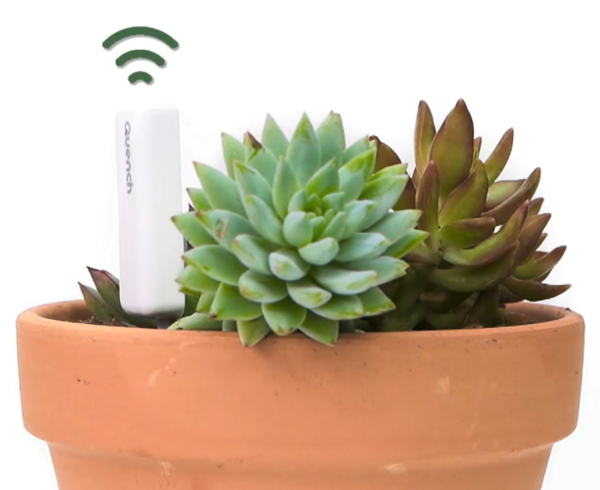 On a very unexpected side note, I’d also like to point out that each Quench probe is unique to its own, meaning that each unit is designed to play its own and very unique gentle audible tone.

Not only that, but since the system’s moisture-detection probe also comes equipped with a Smart Light-Sensing Sensor close to the top-side of its unit, the probe is also capable of automatically entering in a “Night Mode” function. 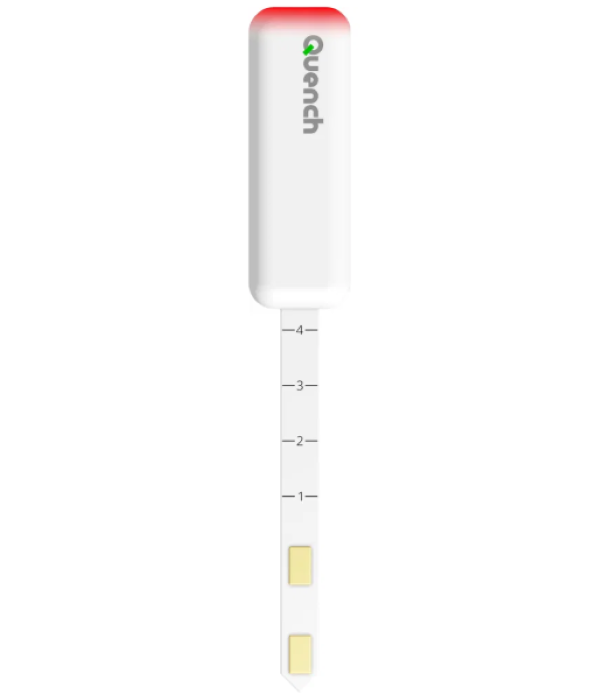 So, if that ends up happens, that means that the probe will automatically illuminate / light-up its one single built-in LED Informational Light with a bright Red Color instead of playing its gentle audible tone, thus letting you know that it’s once again time for you to water your plants, all without having the system’s probe waking up anyone in the family that might be sleeping (an awesome and very-cool feature to see here, in my personal opinion).

Best of all, since this smart plant-watering sensor system was mainly designed with durability in mind, the system’s probe works solely on replaceable button batteries, which can offer you at least 3-years of battery life, and are also extremely easy to replace.

To put it simply, the probe’s robust and corrosion-resistant sensors (as well as all of the probe’s other components) were designed to last the life of your plant. As such, this smart plant-watering sensor system requires no refills, subscriptions, or even any other ongoing costs.

So, let’s have a brief, yet detailed description about how this smart plant-watering sensor system actually works and see exactly how you’re supposed to use this smart moisture-detection probe.

As said before, this sleek smart plant-watering sensor system can ultimately be used for both water-loving plants as well as for dry-loving plants.

Thanks to that, to use it, you simply have to set the probe at an exact depth that suit your plant’s watering-needs and then just let the Quench tell you exactly when it’s time to water your plant once more. 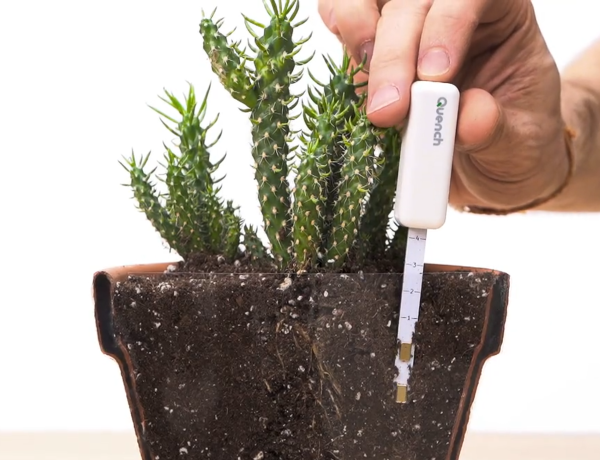 In other words, after you insert your Quench probe into your plant’s vase, you just have to keep “an ear” out for the probe’s unique gentle audible tone, which, as you’ve already realized, will be the main thing that tells you that your plant requires to be watered once again (excluding the probe’s “Night Mode” function with its Informational Red LED Light, of course).

The Quench is a smart plant-watering sensor system that’s able to detect exactly when your plant needs water, for which the system will then notify you with a gentle audible tone.

Overall, this simple, yet ingenious moisture-detection solution can make it very easy for you to take care (or better care) of your plants. With it, not only can you completely avoid over-watering your plants, but you’ll also never forget to water your plants ever again!

If you’re interested in buying it, pledging a minimum of just $27 for the company’s Kickstarter Crowdfunding Campaign can get you two (x2) Regular-Sized Quench Probe units, and there are also other size-options available for just a little extra cash (really, just about $4 extra). Simply click the link provided ahead to be taken to the Quench’s Kickstarter Campaign page.