When on-the-go, it’s safe to say that most people prefer to travel light. Between carrying your personal belongings like your Smartphone, house keys and car keys, and also your wallet, there isn’t much room left in your pockets. Now, while you could obviously carry a purse, bag, or backpack, most people still prefer to travel without one of those, as it is obviously much more convenient in terms of mobility. However, there’s one major problem when traveling light, and that’s the fact that your Smartphone only has so much battery power before it runs of juice. While you could bring along a power bank just to be able to recharge your Smartphone’s battery while you’re on-the-go, that would still be one extra item for you to carry around. So, if you’re looking to make things a bit easier on yourself, then consider replacing your standard wallet for the Atlantis Chargella.

The Atlantis Chargella is wristlet wallet that’s RFID protected while also coming equipped with a built-in 5000mAh re-chargeable power bank that features both Qi Wireless Charging and a USB-C Charging Cable with interchangeable plugs for iOS, Micro-USB and USB-C for recharging your Smartphone while on-the-go.

In addition to its Front Expandable Pocket that features a universal design to make this sleek RFID blocking wristlet wallet suitable to hold Smartphones of all sizes so that you can conveniently recharge their battery via Qi Wireless Charging, there’s also an integrated card holder for different personal cards (including your ID, drivers license, credit cards, etc.), as well as a Deep Pocket for cash, receipts, a Passport, or anything similar to that.

So, without any further ado, let’s have a slightly more detailed look at this RFID blocking wristlet wallet with a built-in 5000mAh power bank and check everything that the Atlantis Chargella has to offer you.

Starting with the wallet’s size, this RFID blocking wristlet wallet with a built-in 5000mAh power bank actually comes at a fairly compact size, featuring a slim body that basically makes it easy and convenient for you to carry it with you whenever you’re on-the-go.

Not only that, but the wallet’s simple and minimalist design also makes it quite stylish, giving it an ultra-modern look. Simple, but still very stylish, which makes it a great fashion accessory for both men and women that not only can easily match just about any choice of clothing, but can also simultaneously offer you some very convenient and functional features for times that you’re on-the-go.

For the wallet’s construction, this RFID blocking wristlet wallet with a built-in 5000mAh power bank features a professional craftsmanship, coming with a precise and high-quality stitching for its premium PU leather, which gives it an outstanding durability for long lasting usage that’s combined with a very smooth texture.

Now, moving on to the wallet’s main components that make the Atlantis Chargella such a special, ultra-versatile, and convenient daily accessory to have around with you at all times.

Starting with the wallet’s Front Expandable Pocket, this pocket actually features a universal design, which ultimately allows this sleek RFID blocking wristlet wallet to be suitable for using with all Smartphone models, meaning that the wallet is actually capable of holding any Smartphone model of any size.

This Front Expandable Pocket features a set of Secure Elastic Straps and a Secure Magnetic Flap that ensure your Smartphone can easily fit inside it while also helping to keep your phone securely in place. It is exactly inside this Front Expandable Pocket that you’ll be able to conveniently recharge your Smartphone’s battery via Qi Wireless Charging.

Then, on the opposite side of the wallet, we have the Atlantis Chargella’s state-of-the-art RFID Blocking technology, which is used for its Integrated Card Holder, which can fit up to three (x3) different personal cards (including your ID, drivers license, credit cards, etc.), and below it, there’s also one extra ID Window Pocket that you can use either for your ID, or alternatively, for your driver’s license, if you prefer.

Lastly, sitting just next to the wallet’s Integrated Card Holder and ID Window Pocket, we also have a Deep Pocket that can be used for storing cash, receipts, paper notes, or even a Passport.

I’d also like to point out that the Chargella also comes together with a matching Secure Lanyard that allows you to use it as a wristlet wallet, and there’s also a Mini Carabiner that can be used for holding a set of keys (house keys and/or car keys).

All that makes this Atlantis Chargella an awesome all-in-one Smartphone case, purse, clutch, wallet, organizer, and portable Smartphone Charger, which ultimately makes it the perfect traveling and daily-commuting accessory for pretty much any occasion.

As mentioned before, this RFID blocking wristlet wallet also comes equipped with a built-in 5000mAh re-chargeable power bank, which is powerful enough to offer your device about one full day of long lasting productivity (whether that’s the latest Samsung Galaxy or the recently released iPhone 12), but potentially you can have it last you even longer, depending on how much you use your Smartphone on a daily basis, of course. 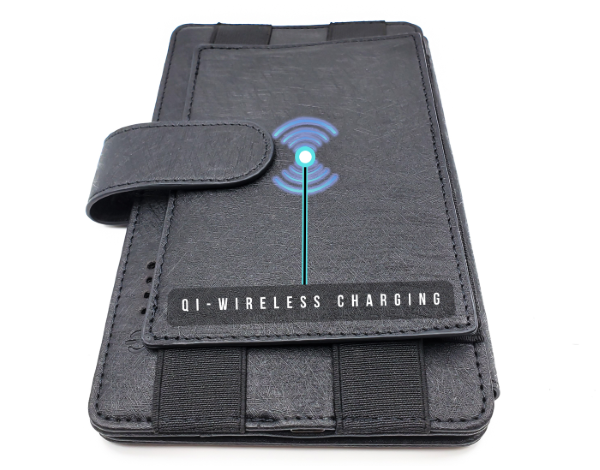 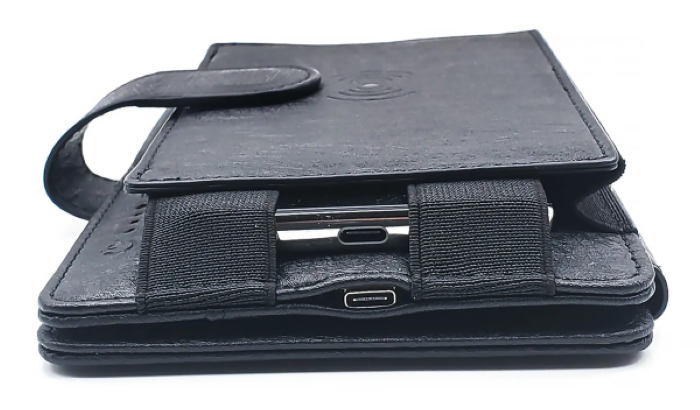 Last but not least, for any Smartphone users that don’t own a phone that supports Qi Wireless Charging, the wallet’s power bank also features a USB-C Charging Cable with interchangeable plugs for iOS, Micro-USB and USB-C, which can all be used separately for recharging your Smartphone while on-the-go, so no matter your Smartphone model, you’re also covered on that.

The Atlantis Chargella is wristlet wallet for woman that’s RFID protected while also coming equipped with a built-in 5000mAh re-chargeable power bank that features both Qi Wireless Charging and a USB-C Charging Cable with interchangeable plugs for iOS, Micro-USB and USB-C for recharging your Smartphone while on-the-go.

There’s a Front Expandable Pocket for holding and charging any Smartphone via Qi Wireless Charging, an integrated card holder for different personal cards, a ID Window Pocket, and a dedicated pocket for cash and receipts.

To put it simply, this next everyday gadget is made for those that love to travel light. With it, both men and women can have a much more relaxed daily commute, which is not only thanks to the wallet’s built-in 5000mAh re-chargeable power bank, but also thanks to the added convenience of having RFID blocking technology for all of your personal cards that contain a chip.

In sum, this wristlet wallet is stylish, functional, and can easily keep your Smartphone powered all day long, all while also keeping all of your personal cards secure as well as keeping your confidence as high as ever. 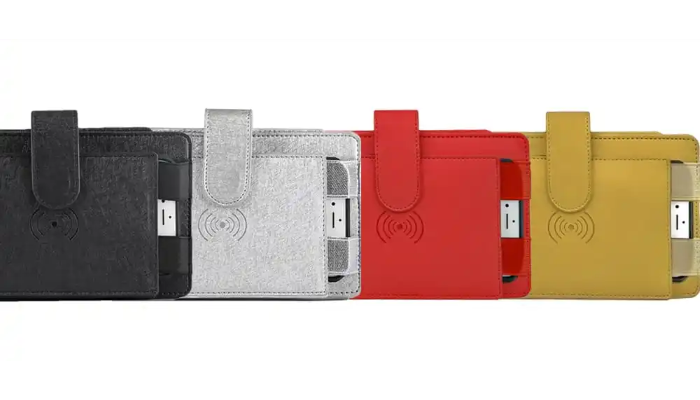 If you’re interested in buying it, each unit is currently going for just $60.00. You can order yours online right now, directly from Atlantis Gift Shop’s official shopping page, which you can access via this link here.

The Magnahoodie is an all-in-one jacket, scarf and hat that uses a patent-pending magnetic closure system in place of traditional hoodie strings to securely close out the gaps around your face in order to keep your head, neck and ears perfectly protected and warm in any weather conditions. Not only that, but the Magnahoodie is built with a special Double-Hooded layer, which greatly helps to keep you extra cozy and warm on those super cold days. Thanks to its unique and ingenious design, you'll never again end up with a cold neck, nor will you ever again have to deal with having an obstructed peripheral vision or the annoying hoodie strings that come with wearing traditional hoodies. All in all, the Magnahoodie truly beats wearing traditional drawstring hoodies, not only to keep the cold, wind and rain out, but also for performing any outdoors activities (such as running, cycling, or even exploring the outdoors) as its patent-pending magnetic closure system ensures that its head-cover never obstructs your view.
Read more
Miscellaneous Gadgets

The KIZIK Shoes are hands-free modern sneakers for men and women that basically put themselves on thanks to their patented External Cage technology, which enables you to step on their retractable Springback Heel and slide your feet right into them. As such, unlike casual slip-on shoes, the KIZIK require no tying, no pulling, no heel crushing, and no use of your hands to put them on. In other words, you can easily put on the KIZIK Shoes without having to touch them at all, making these the easiest shoes to put on that you'll ever see. All in all, these hands-free step-on sneakers are extremely comfortable, super breathable, and also very stylish.
Read more
Miscellaneous Gadgets

The Geekey is a pocket-friendly key-shaped multi-tool made of Stainless Steel which boasts over 16+ unique functionalities that can quickly and conveniently aid you in many different scenarios. It features a Scoring Tip for cutting and opening objects, a Multi-Head Driving Tip that not only fits most screw- and bolt-head styles but also doubles as a Can Opener Tip, a Serrated Edge, an Open Wrench that also works as a Bottle Opener, a built-in Smoking Bowl and Smoking Pipe, an integrated Linear Edge File, a Ruler and a Protractor, a built-in Bit Driver Hex Pocket, a Closed Wrench, a Bike Spoke Key-Wrench that can also be used as a Wire Bender, and a Wire Stripper with a sharp wedge that doubles as Lanyard Hole for your key-chain. All in all, this pocket-friendly key-shaped multi-tool comes equipped with everything you need to face a multitude of everyday handyman scenarios, no matter if you're simply looking to give a quick-fix to your mountain-bike, or even if you're looking to explore the outdoors and enjoy Mother Nature while always remaining versatile.
Read more
Miscellaneous Gadgets

Is it worth getting an electric car?

If you're considering to get an electric car, then this article can tell you in great detail all the Pros and Cons of owning an EV.
Read more