This next gadget is the perfect gizmo for movie lovers that have to travel regularly. If you or someone else you love spend(s) a lot of time on-the-go, one of the best gadgets that you can get is a portable movie projector. These portable high-end projectors are designed to be compact enough to be carried inside a bag or backpack. Not only that, but usually, they also have built-in rechargeable batteries, which means that you can simply set them down, turn them on, and start watching your favorite content. Lastly, most portable movie projectors nowadays are also designed to allow you to watch just about any type of content in a 1080p Full High-Definition quality, whether that’s a movie, episodes from different TV series, or anything else in between. So, if you’ve been looking to get a portable movie projector that allows you to watch your favorite content while you’re traveling, now’s your chance. Check out the Heyup Boxe.

The Heyup Boxe is a portable 1080p mini smart projector that can play video at native 1080p, while also featuring support to 4K resolution for any type of media files, and also comes with a built-in Advanced LED Light that smoothly diffuses brightness to give your eyes a gentler and more relaxed experience, a set of Bluetooth Speakers for great sound quality, and even features multiple input options (USB-C, USB-A 2.0, HDMI and a 3.5mm Audio Jack), as well as Bluetooth and Wi-Fi Connectivity.

Not only that, but thanks to its Android-based operating system FengOS, this portable 1080p mini smart projector even supports Screen Mirroring both from iOS as well as from Android Smartphones.

So, for those interested in learning more about the Heyup Boxe, we invite you to join us on our detailed review, where we’ll have a more detailed look at this portable 1080p mini smart projector and check out everything that it has to offer you.

Starting with the Heyup Boxe’s size, this portable 1080p mini smart projector comes at a very compact size, making it fairly easy for you to easily fit it inside a backpack, bag, purse, etc. Not only that, but the device itself is also quite lightweight, weighing just 2.73 lbs. (1.24 kg), and obviously, that will also help when it comes to transporting the projector around with the rest of your personal belongings.

Then, for its aesthetics, this portable 1080p mini smart projector features a very delicate design, coming in a gentle and sun-bright yellow casing that features smooth curves throughout its whole body, which ultimately give it a minimalist, yet ultra-modern look.

It’s also worth to mention that this portable mini smart projector features a very durable construction, with all of its components coming integrated safely inside its dust-insulated design. This dust-insulated design not only helps to prevent any potentially harmful particles (like dust carried in the air) from entering the projector itself, but also keeps its video-lens completely insulated and perfectly protected from dust. 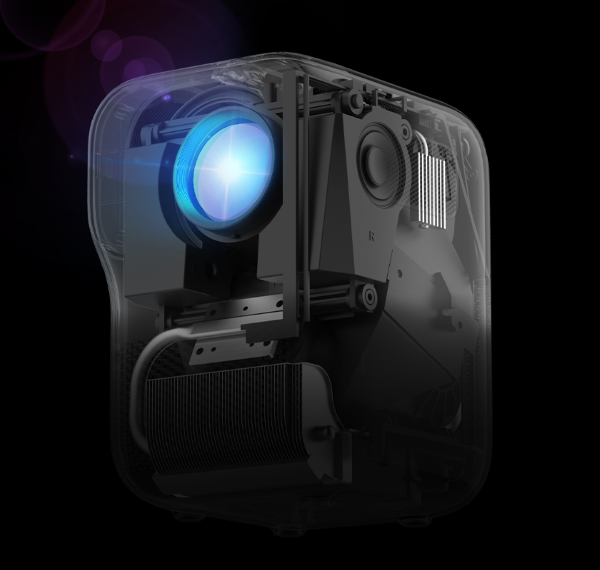 It’s also worth noting that the projector’s Advanced LED Light was designed with its users’ eye comfort in mind, as this Advanced LED Light works based on low-light diffusion methods in order to smoothly diffuse any brightness when having the projector casting its stunning image, all this ultimately helps to ensure that your eyes are given a gentler and more relaxed viewing-experience.

On top of its LED Light, this portable 1080p mini smart projector also comes equipped with a set of two (x2) Customized Guide Tube Cavity 3W Bluetooth Speakers (found at the side’s of the unit) that are capable of producing an outstanding audio-quality for a truly immersive listening experience. 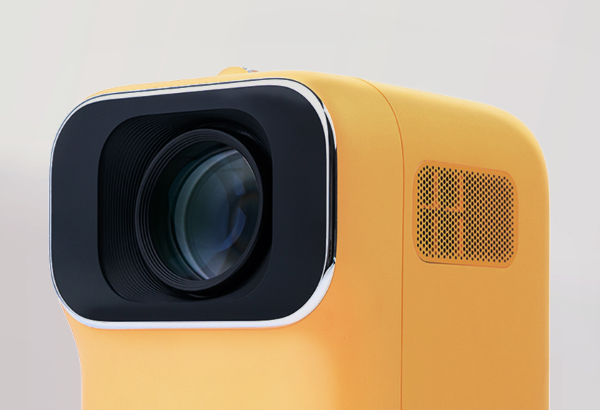 Basically, the projector’s two Customized Guide Tube Cavity 3W Speakers are powered by an innovative Audio Technology called Dolby DD+ (Dolby Digital Plus), which is a special audio technology based on Dolby Digital 5.1 that’s now used as the new standard for cinema, broadcast, and even home theater surround sound.

As such, the projector’s two 3W Bluetooth Speakers are designed to work together as an innovative sound system that can ultimately deliver Stereo Surround Sound with a vibrant bass and incredible sound quality overall, which is dynamic enough to bring you a fully-immersive 360-Degrees Surround Sound, just like you’d be able to experience in a cinema-room (in this case, at a slightly lower volume-level, of course).

Additionally, the Heyup Boxe also integrates Ultra-Quiet Cooling fans that operate at a very minimal noise-level of just 30 dB. Thanks to this smart integration, you’re guaranteed to be able to enjoy all the different sound effects of your content (both low and high sound effects) without ever listening to the Heyup Boxe’s fans working in the background.

Finally, this portable smart projector also boats 2GB of RAM (2GB DDR) and even has a total of 8GB of Storage Space. All of its video-playing capabilities are powered by a really powerful Amlogic T972 chip, which, in fact, is the same type of chip that’s frequently used on Smart TVs.

We’ll now talk a bit about the picture quality that you can get from using this portable 1080p mini smart projector. As mentioned earlier, this portable smart projector is capable of playing video at a Native 1080p Full HD resolution. Nevertheless, for any movie lovers that really want to have the ultimate viewing experience with an outstanding video quality – meaning just like you would on a true cinema – you’ll be glad to know that this projector also supports 4K video-playback. 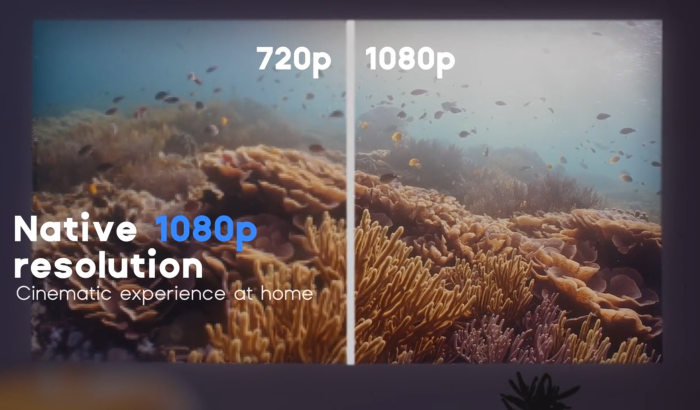 Then, for its picture-specs, this portable smart projector can display your video at a 16:9 Aspect Ratio, while also featuring a Throw Ratio of (1.34:1) and a Refresh Rate of 60Hz.

Moreover, and as stated before, you can actually use this high-end portable smart projector for big-screen projections, as the Boxe can be used for displaying a screen-size picture of at least 40-inches, but ultimately, can be adjusted to cast a stunning image into a giant 120-inch screen size, all while delivering fantastic cinematic-quality visuals with excellent contrast ratio, impressive brightness and accurate colors. 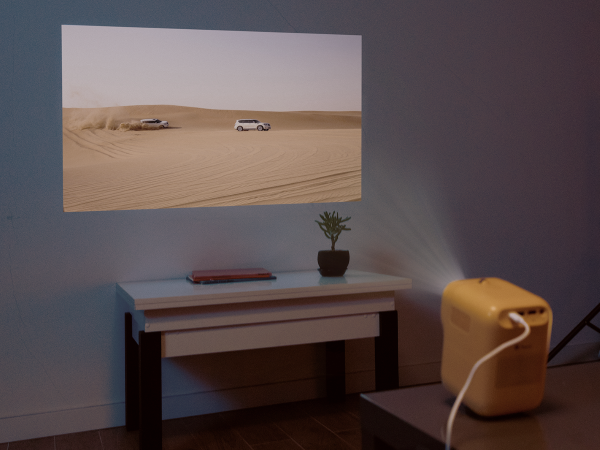 Speaking of its brightness levels, its also worth noting that the projector’s built-in Advanced LED Light can ultimately achieve a brightness-level of 150 ANSI Lumens. 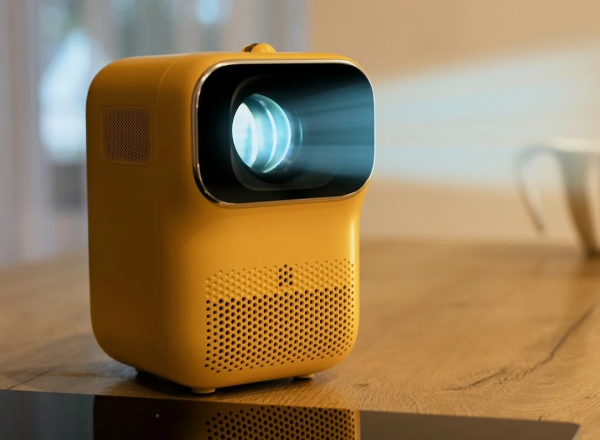 Best of all, this portable 1080p mini smart projector also features support to Keystone Correction, which is a very essential image-adjustments feature that comes with several different adjustment options for quick screen adjustments, fine-tuning, and screen-resetting. 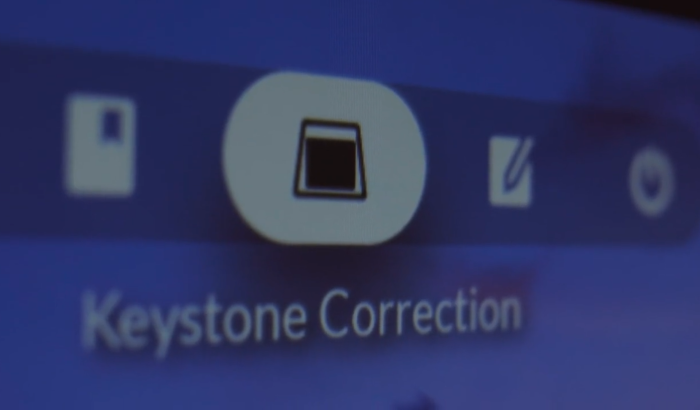 Thanks to its support to 4-point Keystone Correction, the Boxe can be set to work at many different projection scenarios. In other words, not only can users easily correct the Boxe’s image angles, but they can also adjust its image corners, as well as grow and shrink the projector’s produced image manually. 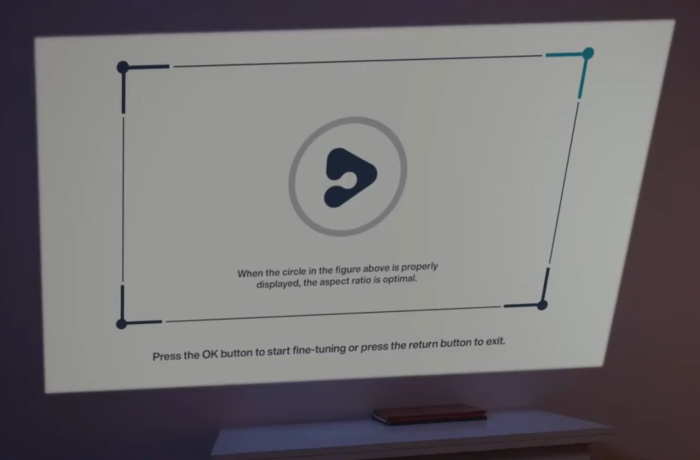 All and all, its support to Keystone Correction Adjustments is exactly what allows the Heyup Boxe to achieve the perfect picture, anywhere, and without any limitations whatsoever. 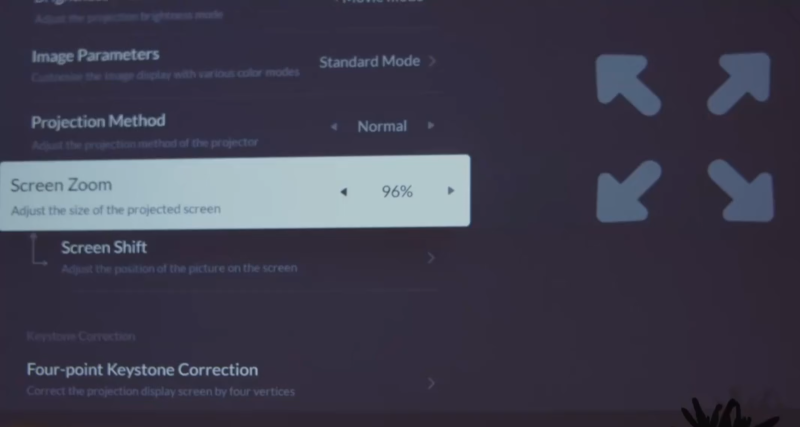 Now, for the projector’s interface, the Boxe features a very simple and extremely user-friendly interface with multiple input options.

Going from left to right, we have the projector’s dedicated On & Off Power Button, followed by a USB-C port and a USB-A 2.0 port, which are then followed by a HDMI port that makes this projector great both for indoors as well as outdoors entertainment, and finally, by a 3.5mm Audio Jack port that you can use for connection a pair of headphones if you prefer to listen to your content’s audio through those. 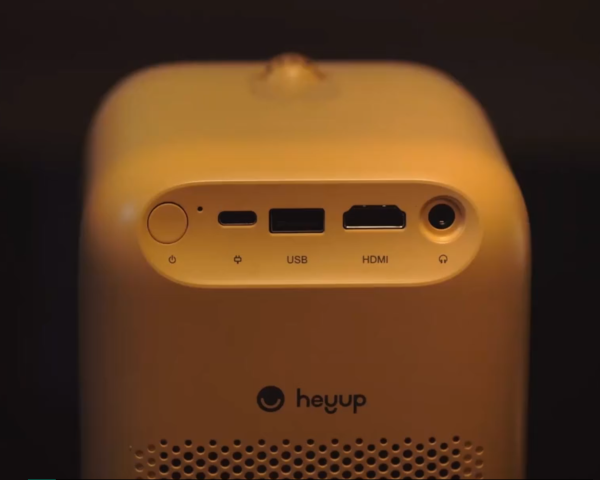 I’d also like to point out that right at the top-side of the projector, we have a built-in Focus Wheel that can be used to manually adjust the projector’s Focusing Distance, with a minimum effective focusing distance of 3.93 ft. (1.2 m).

On the side, this portable 1080p mini smart projector also comes together with an included proprietary remote control that can be used to easily control all of the projector’s different display settings. 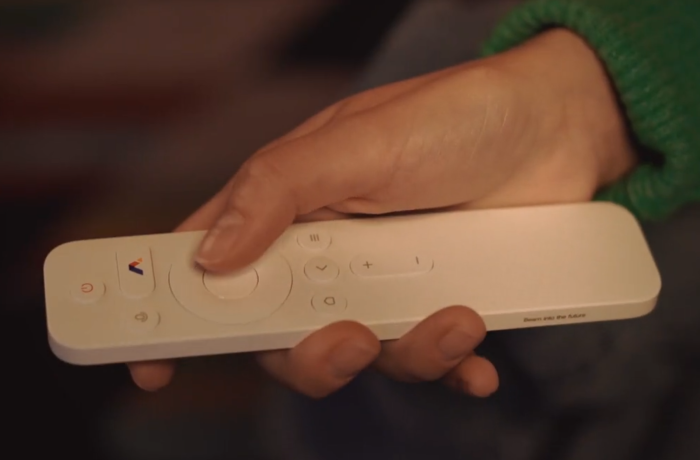 For its connectivity, the Heyup Boxe features support both to Bluetooth as well as to WI-Fi (working both for 2.4GHz and 5GHz WiFi networks).

As stated before, its thanks to the projector’s Android-based operating system FengOS that this portable 1080p mini smart projector can be used for Screen Mirroring, and this can be done either from iOS Smartphone, or alternatively, from an Android Smartphones.

Last but not least, since the Boxe is in fact designed to work as a portable 1080p mini smart projector, it also comes equipped with a built-in 7800 mAh Rechargeable Battery that can ultimately offer you up to 90 minutes of battery life / runtime.

For watching any type of video-content that’s longer than 90 minutes of playtime, you can always have the projector playing your content while having it directly connected to its included Power Adapter.

This included Power Adapter is also what is used to recharge the projector’s internal battery by connecting its USB-C cable-end to the projector’s USB-C port. When recharging its battery, it should only take you a couple of hours to have its battery go back from 0% back to a full-charge (100% power).

Inside each package, users will find: their Heyup Boxe Portable 1080P Mini Smart Projector, the projector’s included Power Adapter, as well as its proprietary Remote Control, a Welcome Envelope, a Sticker, a User Manual, and a Warranty Card.

The Heyup Boxe is a portable 1080p mini smart projector that can play video at native 1080p, while also featuring support to 4K resolution for any type of media files, and also comes with a built-in Advanced LED Light that smoothly diffuses brightness to give your eyes a gentler and more relaxed experience, a set of Bluetooth Speakers for great sound quality, and even features multiple input options (USB-C, USB-A 2.0, HDMI and a 3.5mm Audio Jack), as well as Bluetooth and Wi-Fi Connectivity.

Not only that, but thanks to its Android-based operating system FengOS, this portable 1080p mini smart projector even supports Screen Mirroring both from iOS as well as from Android Smartphones.

All and all, this portable 1080p mini smart projector is a great gadget for on-the-go movie lovers, and with it, you can easily bring a splash of warmth and joy to any room while streaming your favorite type of video-content, whether that’s movies or TV shows.

Thanks to its ultra-portable design and its powerful internal battery, this projector is fairly easy to place in any room, all without requiring any power source. All that ultimately makes the Boxe Projector by Heyup a great option for watching a quick movie or short TV show episodes, as well as for hosting any watch parties on Netflix, Disney+ or Hulu.

If you’re interested in buying it, all you have to do is pledge a minimum of $169 to Heyup’s Kickstarter Crowdfunding Campaign for their Boxe Projector, which, mind you, is around 43% off the projector’s future MSRP (Manufacturer’s Suggested Retail Price) value, so keep that in mind. Simply click either of the provided links to head to Heyup’s Kickstarter Crowdfunding Campaign.