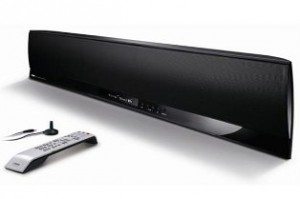 Yamaha introduces the YSP-5100 Digital Sound Projector, a revolutionary single-soundbar device that has the potential to replace all those speakers that you’ve arranged on the walls or in your room’s corners.

At four-feet wide, just shy of four inches deep and weighing 25lbs, the new Yamaha YSP-5100 has been designed to work perfectly with your home theater. The device packs 42 individual speakers behind the grill, outputs nothing less than 120W, copies the specs of a 7.1-channel surround sound system, has five HDMI ports, an iPod connector and a subwoofer output for some extra bass.

Compatible with dts-HD, dts ES and Dolby TruHD/Digital Plus/Digital/ Digital EX/Pro Logic and Pro Logic?/x audio, the YSP-5100 is expected to debut in Japan later this month (maybe in time for Christmas) for a not so cheap $2,280. US markets could see the 5100 as early as first quarter of 2010. (www.yamaha.com)

The Zoeao Gravastar G1 is a Sci-fi Themed Wireless Bluetooth Speaker that features a cool robot-looking design and solid build, a high-quality sound and a deep bass, Bluetooth 5.0 connectivity and Dual Pairing with a second unit.
Read more
Media Gadgets

The Mophie Powerstation XXL is a powerful 20,000 mAh Powerbank that’s equipped with one USB-C and two USB-A Charging Ports. Its high-performance built-in 20K battery comes concealed inside a sophisticated and sleek design, which makes this portable charging solution the perfect accessory for any professional lifestyle.
Read more

Sceptre has a new line of LED HDTVs ranging in size from 19-inches to 42-inches. These models feature widescreens at just .88" at its...
Read more
Technology

Standard Wi-Fi codes are unnecessarily complicated, like “802.11ac”. The numbers actually are an important indicator for what Wi-Fi standard devices work with, but for...
Read more
Luxe List

A fresh New Year is upon us, and with it comes an array of innovations across multiple consumer product categories and sectors—from audio to...
Read more