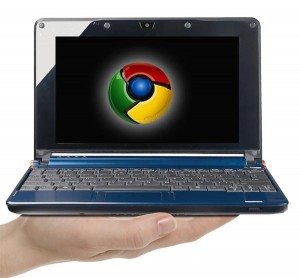 Google has been working with a range of manufacturers to produce a Chrome OS netbook, although they haven’t been Google branded ones. Rumors are afloat that Google may have picked a “steady” to produce their own Google branded netbook.

The Google branded netbook, for now, is targed for the later part of 2010 just before Christmas.  It should solidify a trend the industry is seeing among the netbook design and the perfect OS for it.  Some think that more of a smartphone OS like Android would suit a netbook well.  This stands to reason: A netbook is for portability and light functionality….to surf and answer emails.

Why not stick Android on these devices. With Google, you can pretty much do every business-application-type task in Google’s cloud apps anyway.  Why not make a netbook speedier and more mobile-wise with an OS that loads fast, is built for smaller platforms, but that can be a productive tool while on the go.

Google’s Chrome OS netbook should be a match-made-in-heaven with Google Chrome OS.  No doubt it will have handy shortcut keys and other time-saving tools built into the hardware that will optimize Chrome. (www.google.com/chrome)