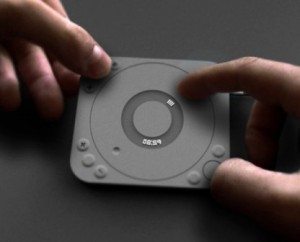 Touchtable is a portable media player designed to be interactive and intuitive, with DJ-style controls. It features a large controller wheel that surrounds the screen and functions like a turntable. It is a design concept at present, by Thomas Mascall.

It’s  sensitive to touch and pressure and when you use it in combo with the surrounding function buttons, it facilitates absolute user control over a track, through precise position, timing and pitch manipulation.

One function button controls the simultaneous switching to a secondary track, allowing the user to mix records on the fly, or to scratch samples over a track. Through the cue output, each track is directed to either the left or right headphone.  The beat and pitch can then be matched, a cue point created, and the combined tracks mixed out the main phono output.

Two devices can also be combined wirelessly at the click of a button, to act similarly to the traditional DJ set up, just at around 1:8 the scale. This function also allows for multiple users to mix and scratch tracks together, combining their own Touchtable devices through one output.

The TouchTable not only adds interaction to the personal listening experience, but can be used for performance. The Touchtable can be plugged into a computer, where it acts as a midi device, working with built in software, allowing complete creativity and control over customization and music creation.

Touchtable allows for complex interactions, comparable to a complete DJ set up, however the device itself is very simplistic: designed for ease of assembly/disassembly, interchangeability and miniaturization through technology. It is not only ultra portable, but cost effective, easy and enjoyable to use.

No word on when this will be out, but suffice it to say that it’s definitely in it’s final stages of design, and we should see a production model of this nifty gadget in the next 3 to 6 months.