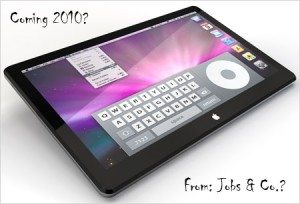 So Steve Jobs is “extremely happy with the new tablet”.  That’s always good news with the Apple chief (he’s apparently already killed it off twice).   Furthermore, Apple is expected to make a major product announcement on Tuesday, January 26th in San Francisco (possibly called iSlate), and Piper Jaffray analyst Gene Munster has noted that “there is a 75 percent likelihood that Apple will have an event in January and a 50 percent chance that it will be held to launch the Apple Tablet”.  Apple shares today are currently up and have hit a record high.

In the last decade we’ve had computers.  Then entered phones designed to, in some cases, replace those computers.  And then gadgets appeared and tried to replace those phones.  So these tablet concepts that pop up every now and then shouldn’t actually create such a fuss, but for some reason, they do just that.  These videos illustrate how beautiful and creative technology can be, but until a company actually fabricates the hardware for such an amazing experience to run on, these fantastic ideas are reduced to nothing but abstract fantasies, so to speak.

Enter the Apple Tablet (guesses on name? Our money is on iSlate).  Apple is legendary for transforming industries with its pioneering products that almost religiously embrace simplicity and ease of usage in their design ideology.  However, Apple is also notoriously tight-lipped about new product launches and has not released any information regarding technical specifications at this current point, although there’s a newly revealed patent application report from AppleInsider that claims it will possibly have multi-touch capabilities with tactile feedback, describing a surface which can “create physical bumps or dots for the user to feel when it is in keyboard mode”.  There is practically no doubt that some kind of tablet-like device will be released in 2010; there are many waiting to see just how Apple takes on this challenge by revolutionizing and changing the way we interact with new media:  websites, video, music, magazines, newspaper, and books that are all moving to digital format.
Via :  Slash Gear