HTC HD2: What WinMo Can Do In the Right Hands (First Take) 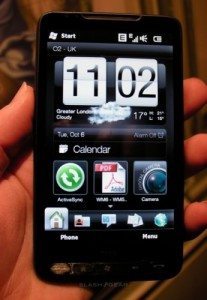 Last week, the buzz was clearly on the DROID (see my first take here) but there was another device that was also getting a lot of attention, albeit somewhat more restrained as few folks had one to work with. A few weeks ago, I wrote a column that emphasized people shouldn’t dismiss Windows Mobile. Over the last week I’ve been using the phone with the quiet buzz that proves that assertion. Sadly, it’s the best Windows Mobile phone that you can’t buy in the US yet. What device am I talking about? None other than the HTC HD2.

While all the goodness of Windows Mobile 6.5 is there, HTC has taken thing to a new level with this latest version of their Sense UI. The ability to see quick information such as Twitter updates, stocks, weather, email etc without the need to go into an app is wonderful, and the speed with which one can move from screen to screen is amazing. Even better, the HD2 fully supports multitouch so zooming in and out of web pages, photos and word documents is simple, fast and fluid (it’s getting harder and harder for me to use a touchscreen device that lacks multi touch). HTC has replaced the stock Windows Mobile keyboard for their own and, combined with the large screen and fast processor, typing was easy and fast. I was able to get about the same speed as I get using the iPhone, something that I’ve not been able to do on any other devices.

Media is fantastic and HTC offers a cool music player (with an Apple-esque cover flow that’s smooth and fast) and of course the photo and video viewing. There’s also Windows Media Player for those looking for Microsoft sync from the desktop. The default browser is Opera which is fantastic and supports multi touch. (IE is much improved but pales next to Opera).[adsense]

I did run into some legacy issues. One odd missing feature is there’s no way to add a user name to the device as in prior versions of Windows Mobile (including stock versions of 6.5) That’s an issue as that’s a vehicle older apps use to register and validate. No user name, no registration. Word is there will be a fix for this sometime shortly. There’s also no d-pad buttons so older titles that depended on physical buttons won’t work well or work at all. The good news is that I had no problems downloading new titles from Marketplace that all worked fine on the device, including classic games such as Galaga and Tetris. Finally, given that this is a European device, there’s no 3G here in the US which tends to slow everything down including web browsing. Using WiFi or MiFi fixed that problem and of course, any device that makes it to the US will likely have 3G on board.

HTC proved an important point with the HD2. It’s possible to take Windows Mobile 6.5 and make it a tier one mobile experience. No doubt it was hard work (for example, HTC had to implement multi touch on its own as there’s no native support for it in Windows Mobile). Oddly, despite all the buzz this device has garnered it seems the only people not talking about it are Microsoft folks. One reason for that is the HD2 is only available in Europe (and remember if you’re thinking about finding one and bringing it to the US note you’ll be stuck on EDGE as there’s no US 3G support). The good news is HTC says it’s bringing the device to the US early next year (no carrier was named as of this point) and perhaps we’ll see Microsoft start promoting it properly as they should. HTC has done an amazing job showing what one can do with Windows Mobile. The question is will see other licensees getting in the game and raising the bar higher?( Via: Slash Gear)