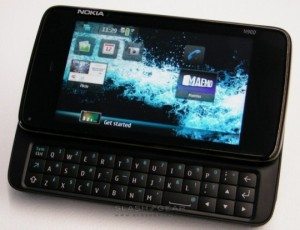 Nokia has a problem: it is both the largest handset vendor in the world, by a significant margin, and the largest smartphone vendor in the world – again, by a significant margin. Yet it has never managed to crack the U.S. smartphone market, and it has begun losing market share even in its European strongholds, primarily to Apple, though RIM, Samsung, and HTC are also threats. Nokia admits that it was caught sleeping while Apple first redefined the mobile user experience with the iPhone, and then again when Apple reenergized app development with the App Store. Nokia’s initial response has been lackluster: adapting its existing Symbian S60 OS to support touch, applying that to a few phones (the 5800 and the N97), and stumbling in its initial launch of the Ovi Store.

Despite shortcomings in Symbian S60 (where apps and settings are located appears to have been chosen at random) and a wildly inconsistent touch experience, the 5800 and N97 have sold over 10 million units. Nokia has sold well over 100 million Symbian S60 phones overall, which puts it in a classic case of what Clayton Christensen calls the Innovator’s Dilemma: Nokia’s existing customers are happy with S60, so Nokia has resisted cannibalizing it. However, the iPhone may have launched without 3G or corporate email, but Apple keeps adding features with each new version, so when S60 users are ready to buy a new phone, they are increasingly picking one from Apple or one of Apple’s competitors. (It is also worth noting that arguments against cannibalizing S60 can only be made for Europe – in the U.S., S60 has never had any traction whatsoever.)

The solution to the Innovator’s Dilemma is to fund skunkworks development or a spin-off that attacks the new technology on its own terms. While initially planned as a way to get Nokia’s feet wet in open source software, Nokia does have another OS, Maemo Linux, that it has been quietly using for its line of Internet tablets (770, N800, and N810). At Nokia World in early September, Nokia announced Maemo 5 and the N900, the first Maemo phone. When I first saw Maemo 5 demonstrated just ahead of Nokia World, my first reaction was to question why Nokia would limit Maemo to pricey, high end devices. After all, S60 isn’t competitive, and Maemo looks really, really cool. Why not just kill S60 and switch to Maemo?

After playing with a production N900 for the past couple of weeks, I have discovered the answer: Maemo is nowhere near ready for mainstream consumers.

There was reason for my initial optimism: the OS has power to spare; it is basically a desktop Linux system in a tiny package. Maemo can handle multiple live apps minimized to little cards (similar to Palm’s webOS); the browser is unadulterated Mozilla code and includes support for a full implementation of Flash 9. The N900 has a high resolution 800×480 screen, TI OMAP3 (Cortex A8) processor, 32 GB flash storage plus an empty microSD card slot, forward facing VGA camera, and 5 MP camera on the rear with dual LED flashes and Carl Zeiss branding. There is a sliding physical QWERTY keyboard, and, for watching media, a pull out kickstand. The N900 has WiFi, quadband GSM and Triband HSPA 900/1700/2100, making it perfect for T-Mobile’s 3G network in the U.S.[adsense]

Unfortunately, the whole is much less than the sum of its parts. The user interface is maddeningly inconsistent and opaque, and while you can learn to live with its quirks after a while, why should you have to? Nearly every mobile OS does a better job of making it easy to navigate; the iPhone is the easiest (at the expense of efficiency) and Palm’s webOS is the most elegant. Nokia needs to add hard buttons or dedicated screen real estate for navigating and launching options menus. For example, touching the top left corner is usually the “go back” area. Except when touching the blank space in between app tiles backs you out. Except when you’re in a web browser, and a link is occupying the top left, then there’s really no way to get back at all without first minimizing the view. The resistive touchscreen is another problem – even when you push in the right spot, it doesn’t always register. I find myself repeatedly pulling out the stylus, and that should simply never happen on a modern smartphone.

There are no SEND or END keys (Motorola’s DROID has this problem, too), and there is no permanent place for the soft keys – depending where you are in the UI, it can be awfully hard just to find the dialer. This is the first phone I have used in a while where making a phone call isn’t just a secondary use case, but is barely a use case at all.

Web browsing is good, though navigating around a web page is not as smooth as Apple’s Safari. Still, this is one area where the N900 can do things no other phone on the market can do, at least until Adobe rolls out Flash 10 support broadly next year. YouTube videos play smoothly, and navigating around Flash-heavy sites is possible. (Theoretically, you should even be able to watch Hulu on the N900. Practically, it doesn’t work, even over WiFi – the video loads, slowly, then… stops.)

While I encountered system messages that would terrify non-technical users (do you want to update your phone’s SSL sockets? Who knows?), the N900 is better than previous Maemo Linux devices. For example, downloading and installing applications is a simple process now. But there aren’t that many apps yet, and Nokia’s Ovi Store still has a “Coming Soon” banner. Nokia is providing for cross platform (Symbian and Maemo) development with upcoming versions of its QT tools, but Nokia’s focus with developers is still on Symbian.

This leaves Nokia with some tortured market positioning: Nokia told me it is firmly committed to Symbian as its smartphone platform of choice, while Maemo will be relegated to high end devices and aimed at consumers who want more of a computer and less of a phone. The latter description fits every iPhone, Android, and webOS user (and those handsets start at just $100 after carrier subsidies). Nokia needs something better than S60 with touch. Maemo Linux could be that thing, but it isn’t yet, and it doesn’t look like Nokia really wants it to succeed broadly.(Via: Slash Gear)