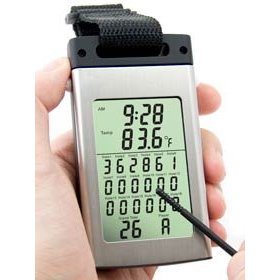 Sometimes that small scrap of paper and chewed pencile can just be too cumbersome when you need to keep score in golf. So, instead, swap them with a stylus and a digital score keeper that also tells you the time and the ambient temperature in a nifty pocket sized gadget that proves you can turn anything into gadgetry.

At less than £15, the digital score keeper is actually quite a bargain and the perfect gift for golfers that take their Sunday afternoon stroll just a little too seriously. Not only does it keep score for four players over 18 holes but it records everything on one screen so you don’t need to spend five minutes every hole before teeing off while you navigate your way around an obstinately challenging menu system.

What’s even better than that, and better even than the golf ball shaped buttons, is the fact that it stores the scores for use later. Once bragging rights have been won and confirmed by everybody you know then you can clear this week’s score and go again in seven day’s time. Don’t worry, if you lose, you can conveniently delete the scores too.

Via: Gadgets and Gizmos