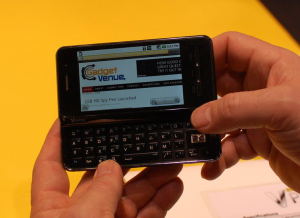 The VPhone was on show at CES in Las Vegas last week. The VPhone comes from a company called Saygus, a small company based in Utah. The VPhone allows for two-way calls to be made on the Verizon network and is part of Verizon’s [VZ] Open Development initiative.

The VPhone’s hardware specs show that it has an 806MHz processor (Marvell PXA 310), has 512MB of flash memory, 256MB of RAM and can support up to 16GB SDHC cards. The camera on the back of the phone can capture images at 5 megapixels while the one on the front used for video calls has a VGA resolution.

When the VPhone was spotted a few months ago it was running the Android 1.6 operating system. The company has plans to run the phone on Android 2.X when launched early this year. The phone it’s self looks fairly impressive and although not the smallest of handsets it still comfortable to hold. It does have a full QWERTY slide-out keyboard which ads a little bulk to it. The screen measures 3.5 inches and is capacitive running at a resolution of 800 x 480 pixels.

For connectivity the phone connects on CDMA networks and also has wifi built in that can connect up to 801.11b/g networks. Bluetooth 2.0+EDR is also included for communicating with laptops and other phones. The phone also has GPS built in.[adsense]

Saygus are also using the phone to showcase their video-calling software. The software used is capable of transmitting a video over a 48k stream at 24 – 30 frames per second with a resolution of 352 x 288 pixels. As well as being able to handle two-way video calls the phone can also work as a Wi-Fi access point (which is also 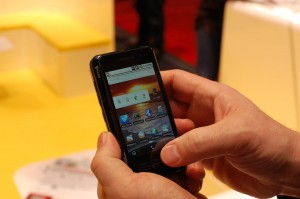 available on most other Android phones that get rooted). However, you will still be restricted to the data plan allowance, so make sure you monitor your data usage should you open up your phone for several people to connect to.

Another interesting thing I hear is that they want to make it compatible with Skype and if Skype approve it we could see VPhone to Skype video calls being made potentially lowering the cost of video calls over seas.

It’s not a bad phone overall and seems to run smoothly. It doesn’t have the 1GHz processor that the Nexus One does, but it is clocked higher than other Android phones making it fairly snappy. It also has two-way video calling with low bandwidth making it an attractive option for those wanting video calls.