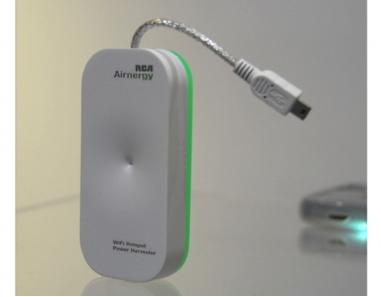 RCA shows us a new way to scavenge power from your environment using an energy source that’s all around us: WiFi. RCA says its Airnergy Charger harvests stray WiFi signals and converts them to DC battery power that you can use to charge your cell phone, music player, or other electronic devices.

RCA calls the Airnergy a “WiFi hotspot energy harvester”. The device is about the size of a cell phone, with a Micro USB connector hanging off it. Inside is an antenna to receive 2.4GHz (802.11) WiFi signals, and a converter that turns the WiFi energy into DC power which is then stored in the on-board battery.

You can keep the Airnergy in your briefcase or your pocket, and whenever it is within range of WiFi, it charges itself. Simply connect it to your device to charge its battery. And, unlike solar chargers, the Airnergy works at night.

At the CES 2010 show, RCA demonstrated the Airnergy charging a BlackBerry from about one-third to fully-charged in about 90 minutes. Naturally, the strength of the WiFi signal will affect how quickly the Airnergy can charge a device.

RCA says they are already working on a new version that will be small enough to fit inside an OEM cell phone battery. With the Airnergy harvesting battery pack, you could recharge your phone or other device simply by leaving it in range of a WiFi hotspot

RCA is working to bring the Airnergy Charger to market in the third quarter of 2010, with an expected price of $40. (www.rca.com) (video courtesy of OhGizmo)