The Frightened Grasshopper is a little solar powered toy bug that moves around mimicking a real grasshopper. It is a life size model of a grasshopper that you construct yourself. Once built it will shiver or bounce around while under light. 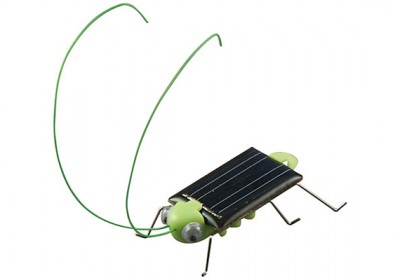 This solar powered toy is meant to help educate children about solar power.  By constructing the model themselves, the child will have a greater connection to this little bug toy, and through watching it once constructed they should see an effective demonstration of how the power of the sun is harnessed by the solar panel (PV cell) and converted into electrical energy.

That electrical power is then used by a motor within the bug to move the toy around on the surface it has been placed on.  The toy bug works well in direct sunlight, but if that is not possible it should work well directly under a  non-florescent light bulb.

The Frightened Grasshopper is meant for ages 10+. The toy is designed to be suitable as a first time science project to help teach children about alternative forms of energy. Available from Amazon for $14.49.