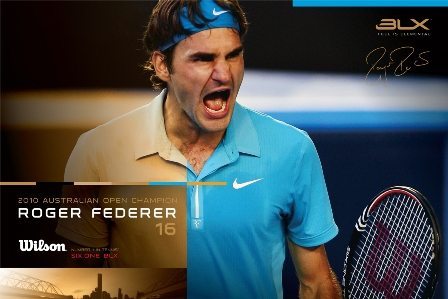 Federer’s continued success is due in part to Wilson’s ever evolving technology and BLX is no exception. Federer switched to his new Six.One Tour BLX racket at the beginning of 2010.

“Wilson continues to provide rackets with the most cutting edge technology and this racket really gives me the extra feel I look for,” Federer said after claiming the title. “My new BLX racket provides me with the extra edge I needed to succeed.”

The #1 player in the world stayed strong throughout the entire match in Rod Laver Arena winning 6-3, 6-4, 7-6 (11). Federer broke Murray’s serve twice in the opening set and once in the second. Federer rallied from 5-2 down in the third, breaking Murray when he served in attempt to push the match into a fourth set.

Federer solidified his #1 ranking for a 268th week and tied Jimmy Connors in third place on the all-time list. Since 2004, he has reached at least the semi-finals of every Grand Slam. He continued his Grand Slam streak with a 23rd consecutive semi-final appearance.

“It’s an incredible feeling to continue this streak and my success at Grand Slams,” Federer said. “This 16th title means the world to me and I hope to keep this streak alive.” 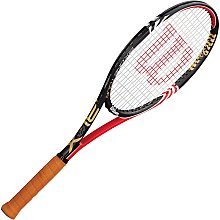 Once again, Federer has raised the bar in the game of tennis and provide another benchmark for his competitors to work harder, play better and achieve more. He is still No.1 in the world and even with competition snapping at heels everyday, the legacy continues.

Wilson’s BLX Technology incorporates a new material into their highly respected racket line: Basalt. Basalt is a natural volcanic rock used in manufacturing and made into fine and ultra fine gold fibers. Basalt fibers are enviornmentally friendly and superior to other fibers in terms of thermal stability, sound insulation, vibration assistance and durability.

With the new BLX line, Basalt fibers are woven longitudinally with the innovating [K]arophite Black to create the most advanced composite ever in the industry. Players find the ultimate in frequency reduction while retaining the performance of carbon fiber in terms of lightness, responsiveness, stability and rigidity.  Basalt added into racquets filters out unwanted frequencies (i.e vibrations) that reach the hand to deliver a clean feedback and sensation for the perfect feel players demand. (www.wilson.com)