DriveNTalk KlaT 7 is another mobile device

It appears that the iLane isn’t the only device that is made to help driving safe for mobile devices. 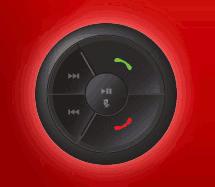 This is the DriveNTalk KlaT 7, which is Enustech’s new brand name, “living up to [the] true definition of its name (the DriveNTalk, not the KlaT, whatever that means). DriveNTalk has Voice command with its voice to text service, with no need to see or touch the unit for controlling it. Apparently, the device is solar powered.

The user can “enjoy the experience of a[n] optional service of sending SMS, e-mail, and/or SNS” through vocal control.

As you may have guessed, I saw this DriveNTalk KlaT 7 at CTIA, but the demonstration was quite sub-par. Granted, they had a car set up at the booth, which was more than what most booths had, but there was a lady at the booth who couldn’t get it to work properly.

My guess is that she was just a booth-babe. In case you aren’t familiar with that term, it is something very common in Vegas trade shows. There are the attractive females that the company hires to get men to approach the booth.

The DriveNTalk KlaT 7 doesn’t seem to be available, but here is a link to their website if you want to know some more information.

USB car chargers can be plugged into your car's cigarette lighter/accessory port to provide a quick way of recharging your personal devices, but most...
Read more
Car Gadget

Whether you're looking for a new Qi-enabled wireless smartphone charger or a brand-new car jump starter, the Mophie Powerstation Go has you covered. Mophie has...
Read more

The Sun Joe SPX3000-MAX is a 14.5-AMP electric pressure washer that features a powerful 14. 5-amp brushless induction motor that can generate up to 2, 800 PSI and 1.3 GPM, a 35-foot power cord with built-in GFCI, and even two built-in 30.4 fl oz detergent tanks and a detergent dial that lets you control your cleaning mix. Furthermore, this electric pressure washer also includes a few versatile attachments like a durable 20-foot steel-reinforced high-pressure hose, a 34-inch extension wand, a garden hose adapter, and a needle clean-out tool that allow users to adapt their needs to whatever cleaning task they are looking to get out of the way. This electric pressure washer is made for those who expect the most out of their machines, and so, whether you’re a pressure washer pro or just a simple homeowner who appreciates the value of pro-grade gear, you can rely on the SPX3000-MAX Electric Pressure Washer to get even the toughest home, outdoor and auto cleaning tasks fulfilled.
Read more

While most (or even all) major printer manufacturing companies have launched several all-in-one printers that can do it all, all of those devices claim to be the best in their class. So, take a look at our list with the top 5 best All-in-One Printers in 2020 and choose the one that better fits your printing needs.
Read more

Motorola announced pricing for their XOOM tablet. Apparently, the 3G/4G version will be available from Verizon Wireless for an unsubsidized price of $799. The tablet will...
Read more
Car Gadget

These are the first pictures of the all-new Maserati Quattroporte, which havw been released ahead of the car's public debut at the 2013 Detroit Motor Show in...
Read more
Media Gadgets

Portable powerbanks are becoming a necessary accessory for any smartphone user, especially those heavy users. AMPY is changing things up with this product category...
Read more