Intel is showing off a pocket-sized device that monitors power usage by gadgets and appliances across a house, from toasters to computer monitors and video game consoles. 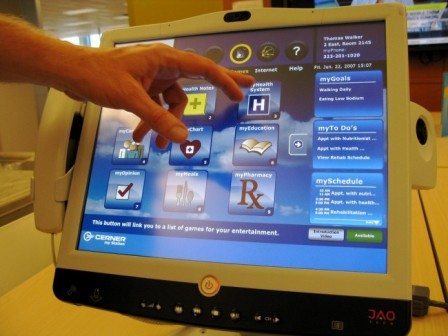 The small black box plugs into a single power outlet and wirelessly sends its data to a partner display device, which has an Intel Atom processor and the MeeGo operating system. A sensor in the box can detect which appliances are being turned on or off by watching for their unique electricity usage patterns. That allows the creation of logs that can show, for instance, at what hours each day an Xbox or certain lights have been turned on.

The setup aims to help users cut back energy usage. The display device, for instance, shows a clock with yellow and red tick marks to indicate when electricity prices peak during a day, so a user can avoid tasks such as washing laundry at those times.  A user could also activate custom settings on the touch screen of the display device, which is about the size of a tall book, to modify the thermostat temperature or to turn off some appliances. Users also may be able to download applications for the device from Intel’s AppUp Store, which the company has created as a market for apps on Atom devices.

Intel is working on a reference design for the sensor prototype, said Justin Rattner, the head of Intel Labs, after an onstage demonstration of the technology on Wednesday at the Intel Developer Forum in Beijing.

Mary Murphy-Hoye, an Intel engineer who had a similar sensor system set up in her home, told stories during the demo about its usefulness. “You can reduce your energy consumption by 15 to 30 percent,” she said.

Separately, Intel researchers are also looking at other power projects including new ways for households to store energy, Rattner said. For instance, power being stored in electric cars could be fed back into the power grid, he said. Another topic is ways for homes that generate their own power, such as with wind turbines, to store that energy if it goes unused, rather than selling it back to the grid.