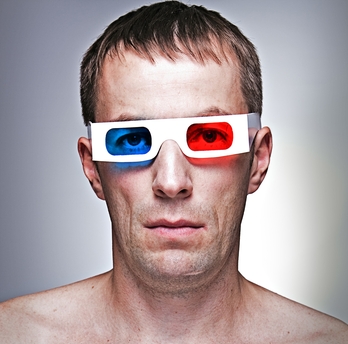 If you love the idea of three dimensional movies and entertainment attractions, hold on to your seat, it looks like you might be able to go sans-glasses and still see the 3-D effects…soon. The current sunglasses-style frames and lenses are, admittedly, a step up from the blue and red gel lenses in the paper frames of yesteryear but tech fans, and prescription glasses wearers, are looking forward to a more direct 3-D experience.

3-D effects in film,  television, and other entertainment happen when slightly offset images are shown to the viewer. In it’s current state of technology, 3-D specs appear blurry to users without glasses because the offset images are overlapping. The special glasses are polarized: One lens for vertical polarization and the other lens for horizontal polarization. The offset images are broadcast in opposite polarities so that when the viewer wears the glasses the images are separated and allowing the eyes to process information as if it’s happening with a true depth of field.

On a very small scale, this 3-D without glasses technology is already available to consumers. The Nintendo 3DS portable gaming system was debuted at E3 in 2010 and was hailed as the first portable console to display a glasses-free 3-D image. According to this review from cnet.com. “The Nintendo 3DS successfully offers a glasses-free 3-D experience that needs to be seen to be believed.”

The simplest installations of glasses-free 3-D will be in movie theaters where patrons are stationary. Consider other current uses of the 3-D technology like this Universal Studios ride inspired by the visionary Michael Bay film “Transformers.” In the case of adventure attractions like this, the audience is moving through space and may be viewing the entertainment at different angles from a traditional stationary theater set up. In these venues, a rear-projection approach could be an effective method of providing the same entertainment value without the glasses. The rear projection concept is taking the technology used in the Nintendo 3DS and smart phones like the HTC Evo.

If glasses-free 3-D becomes a practical reality for immersive environs, imagine other action films that could be featured attractions at theme parks. Just about any Michael Bay film has enough action to create a compelling virtual medium, or what about the Disney Star Tours attraction- based on the “Star Wars” film franchise could certainly use a reboot, and can you imagine what a “Dark Knight” theme ride might look like?

Since having two projectors in a theater is twice the price, plus the additional hassle of keeping the images perfectly aligned and the distribution and collection of glasses is also labor intensive, theaters will be looking for ways to utilize new technology ASAP.

Rear projection, as discussed above, is impractical in nearly every existing theater. Commercial movie theaters are rarely, if ever, designed for anything but standard forward production. The most common installation of glasses-free 3-D in theaters will likely involve a single forward projector. A filter (much like a set of vertical blinds) would be placed in front of the projector to block sections of the screen. The projector would be showing right and left eye images overlapped in columns. This way your eyes would see slightly different pictures – thus fulfilling the core principle behind 3-D entertainment. Because of the recent surge of films being released in 3-D, like the always anticipated Michael Bay action films or the latest family-friendly Pixar offerings, theaters are sure to be looking for economical ways to provide 3-D to viewers.

The concept is simple and effective, but since some of the light is blocked to each eye, expect the initial resolution to be somewhat low. Should initial testing be successful, however, the technology is likely to advance rapidly to keep up with consumer demand. Another area in which the 3D market is rapidly expanding is in the online casino market. With such hefty competition from a variety of other firms the next logical step is to upgrade the online gaming experience as much as possible. The advancments in 3D technology enables companies such as LuckyNuggetCasino.com to not only bring the casino to you, but to create a full unparalleled experience.

Samsung NX10 Comes in Black and White for a Limited Time