Listening to a voice call through a noisy background like a coffee shop or a street corner can be really hard and even become headache inducing. Bose’s new Noise Cancelling Headphones 700 (NCH 700) solve this problem. Equipped with a unique 8-microphone array, they’re a must-have for people who make a lot of phone calls.

Noise-canceling headphones remove background sounds to help us relax or focus, but Bose went a step further, utilizing its sound reduction technology to help the person on the other end during two-way communication, or when talking to voice assistants like Siri, Google Assistant, or Alexa.

The NCH 700 is equipped with 8 microphones, six of which are used to reject noise. The other two use beam-forming technology to pick up whatever sound is produced on your end. Of the first six mics, two are used to reject noise, while also acting like noise defense systems, searching for loud sounds around you to track and suppress. The mics are always working, even when moving around, ensuring loud noises close to you are always muffled. The result is astonishing. Whoever is on the other end of the phone call, person or voice assistant will be able to hear you clearly, without all the background noise.

In a demonstration, a Bose employee sat in a Starbucks across the street with both the QC35 II and the NCH 700 connected via Bluetooth and his coworker made a phone call. Listening through an iPhone speaker, the QC35 II picked up all the ambient noises in the coffee shop, making it difficult to hear the person in Starbucks. When swapping to the NCH 700, the difference was clear. Despite seeming that the call dropped because of hearing only silence, when the employee talked, ambient sounds and chatter were still audible but were significantly suppressed, and his voice was clear and easy to understand.

Another demo tested Siri’s potential to understand someone using the QC35 II versus the NCH 700, with many background sounds present. The impressive NCH 700 hit 100 percent accuracy in understanding voice commands, while the QC35 II only picked up one or two commands (various conversations happening around the room were also picked up). 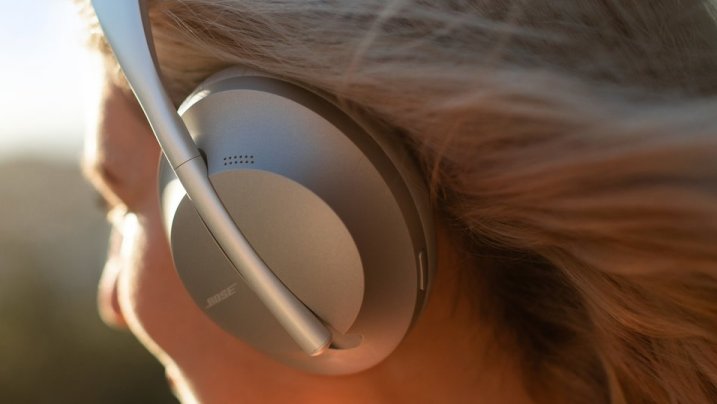 The Bose NCH 700’s noise cancelation ranges between zero and 10, being 10 the highest setting to cancel any outside noises. The zero level, called “Transparency”, uses the microphones to send all the background noises around you straight to your ears, which is ideal for when you want to pay attention to your surroundings, like when crossing the street, using public transportation, or when you’re at the airport. The headphones have really good passive sound isolation, able to block most of the outside sound, even with noise cancelling is off. At the highest setting, it’s almost impossible to hear anything around you, especially when playing music.

In case your music is off, you’ll hear a muffled version of the external noises being played around you, but only after taking the headphones off and hearing how loud the ambient sounds are, you’ll be able to understand how well the NCH 700 perform.

The NCH 700 has a simple and clean look. The headband is a single piece of stainless steel, the adjustment mechanism works flawlessly, and they’re lightweight. The padding on the ears and headband are super soft, making the headphones feel like a cushion.

For controls, there’s a total of three buttons. The first one controls Bluetooth and lets the user pair the NCH 700 with two devices simultaneously. A customizable setting in the companion app lets the user set the headphones to automatically turn off if they’re not used after a set amount of time. The second button on the right ear cup lets you talk to voice assistants. If you’re connected to an iPhone you can talk to Siri, or to Google Assistant when connected to an Android phone. If you have the Alexa app, you’ll be able to set it to Amazon’s assistant. Alexa has a built-in wake word that doesn’t require the use of the button, needing only to say, “Hey Alexa.”

The third button on the left ear cup, is used to control the noise canceling level. Tapping it three times cycles through High, Medium, or Low noise cancellation, and you can customize these levels through the app. Double tapping the button turns on “Conversation Mode”, pausing music and activating the “Transparency” mode.

To control music playback, you can use the capacitive sensor located on half of the right ear cup. Swiping forward and back on it changes tracks; up or down controls volume; double tapping plays or pauses music, or accepts a phone call; and pressing and holding rejects one. You can also double tap the voice assistant button while in a call to mute your mic, which is great for conference calls.

Music sounds balanced, with clear highs. The bass doesn’t sound super strong, but has a great quality, which may be surprising, since the NCH 700 doesn’t support higher quality aptX or aptX HD codecs.

Regarding battery life, Bose claims the headphones will last up to 20 hours with continuous music streaming and noise canceling, which is between ten to 16 hours less than its competitors. You can charge the headphones via the USB-C port.

You can already pre-order the Bose Noise Cancelling Headphones 700. Sales start June 30; and priced at an expensive $399. You might prefer to get the cheaper Bose QuietComfort 35 II (QC35 II) if you’re just looking for quality noise-canceling features for listening to music.

Despite its premium price, if you frequently receive calls in loud spaces, you probably won’t be the only one loving the NCH 700, as the person (or voice assistant) on the other end of the line will also benefit.

The Flare Audio Calmer Earbuds are unique small in-ear devices that can help reduce any higher-frequencies that reach your inner ear, thus helping to reduce stress while simultaneously increasing the overall sound quality of surrounding noises by simply reducing any unpleasant high-frequencies. Additionally, you also have the Isolate 2 In-Ear Protectors, which are a pair of revolutionary certified micro ear protectors that use solid aluminum to greatly block any loud noises from your surroundings in order to ultimately protect you from any hearing damage and any potential hearing loss.
Read more