Setting up a network room can be quite the task, and potentially, a headache, especially if you don’t have the right equipment to do it. That being said, half-width switch space installations are very popular, as they offer network managers/admins two major advantages. Firstly, one can deploy redundant switches in 1U of rack space, which allows network managers to achieve more compact installations, thus taking up less room, and that goes particularly for smaller clusters. Secondly, it will also generally cost network managers much less for smaller lower port count switches. This is where the Netgear M4300-8X8F Stackable Fully Managed Switch comes into play.

Not only that, but the M4300 series can be scaled from 24x1G to 48x10G all the way up to 384 ports per stack, all while also being guaranteed to deliver nonstop forwarding, spine and leaf, edge to core connectivity for unified wired and wireless networks. Ultimately, this stackable and fully managed switch can deliver an unstoppable operation with management unit hitless failover and absolutely no service interruption for the clients connected to the other switches within the stack.

Now, let’s have a more detailed look at the Netgear M4300-8X8F and check everything that this stackable and fully managed switch has to offer.

The Netgear M4300-8X8F was designed to work as a half-width switch, which is actually a very appealing feature, working great for midsize server installations. As such, this basically means that this switch unit can be mounted side-by-side with a second switch in a cost-effective single rack space for redundant top-of-rack.

Furthermore, thanks to its non-stop switching and non-stop routing stacking technology, this switch series model ultimately ensures no single point of failure for each every server that’ll be potentially connected to the stack.

It’s also worth to mention that if network managers are willing to go for some mounting bracket work, one could conceivably be mounted next to bigger server units.

Both scenarios obviously pack a lot of capability into 1U of rack space (a single rack space for redundant top-of-rack), both offering a SD-WAN platform, two 10GbE switches, or a single lower-cost switch option in space-constrained racks.

At the back of the switch’s body, its design is very simple. Users can find a small label with the switch’s serial number, model, and MAC address information.

Then, at the middle of the unit, there is a fan exhaust, and at its fan’s right side, users can find the switch’s dedicated built-in modular PSU (Power Supply Unit). This power supply is the company’s very own Netgear APS250W PSU, which was manufactured by Great Wall.

This power supply is not redundant, but instead, it works as a field replaceable PSU, which means that you can insert the PSU with a power cable attached to power up the machine, so it works as a hot-pluggable solution as well.

Since there is only one PSU within this switch, if you’re ever looking to swap the switch’s power supply, make sure that you’re not running any important network tasks, as the switch will power off as soon as its PSU is removed from it.

Other than power and to potentially look at the label, there is nothing else on the rear end of the switch, so almost all servicing will be done via the front of the unit (meaning its interface).

Moving on to the switch’s interface. Starting at the left side of the switch, the device features a set of standard LED status indicators that are organized in a vertical setup (including the Power LED and two others), and under those, users can also find the unit’s dedicated Reset-Switch button.

To save users some time, it’s worth to mention that at the bottom left corner of the unit, you’ll also able to find Netgear’s printed baud rate (of 115200) of the serial console directly on the switch. While that might inicially seem like a standard, small and easy detail that many companies would follow (which not all of them do), this is actually something that all network managers wish that all companies would actually do.

While there is a mini USB port for console, there’s also a second USB port. This is a USB Type-A, which should be primarily used for the device’s management (such as updating switch firmware, for example).

It’s also worth to point out two other features from the left side of the unit. Users can also easily find the device’s Stack ID LED as well as its Stack Master indicator. As this model/series of small half-width switches are stackable (discussed again later at the Features section of the article), that means that they can be stacked with other M4300-8X8F switches, but also with other switches that are part of the M4300 line.

That ultimately makes deployment and administration slightly easier. One can even use any of the switch ports to do the stacking.

This half-width switch also features an out-of-band management port that’s simply labeled as “OOB”, which is a fairly standard feature on higher-end switches. While the company (Netgear) is making sure to follow the industry standard in this regard, companies like Ubiquiti aim to cut out on small details such as this one – even on their 25GbE “data center” models – just to end up saving pennies. Definitely, this is another thing that we should praise Netgear for, because, as noticed, it seems like the company really believes that the customer comes first, and not the profit.

Ultimately, Netgear made the right design choice here, as OOB management ports are extremely useful and this is a feature that any professional network manager would expect and want to see in a switch unit.

Now, moving on to the switch’s best part, which is its switch ports that come organized in two slightly separated blocks.

All of the switch’s sixteen (x16) 10G ports are independent and 1G backward compatible for progressive transition to 10G speeds Ultimately, these ports can throttle down to 1Gbps speeds and the RJ45 ports can also handle 100M speeds if you absolutely need that feature.

Lastly, it’s also worth to mention that near the unit’s management port, the M4300-8X8F also comes equipped with a few vents that ultimately help the switch to facilitate its internal airflow. Clearly, Netgear designed this switch series with enough thought around it to ensure that the unit would always get a proper airflow.

Keep in mind that the switch’s power supply was also designed to move air through its chassis right over its internal components, which, once again, ensures a proper airflow during the switch’s constant operation.

Thanks to its small and compact design, this half-width switch is quite easy to install. As mentioned earlier, two half-width M4300 10GbE models can be paired in a single rack space for redundant top-of-rack and active-active server installations.

Below, you can find an embedded picture that represents both the single and dual switch mounting options from Netgear, and this small example will show you exactly how this could also work if you end up getting two switches. 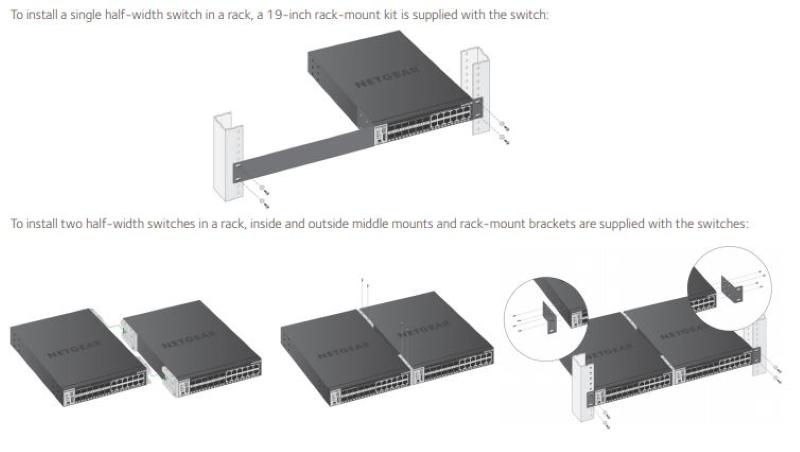 Lastly, in case you’re wondering whether or not there are rack mounting kits included with this switch, let me ease your mind and tell you that the package actually comes with a few included rack mount ears within the unit’s mounting kit.

This is a great feature that not only immensely reduces admin overhead, especially when your switch stack isn’t installed in a central room (i.e. such as spine/leaf topology), but also provides non-stop forwarding (NSF) and hitless failover for highest availability (HA). 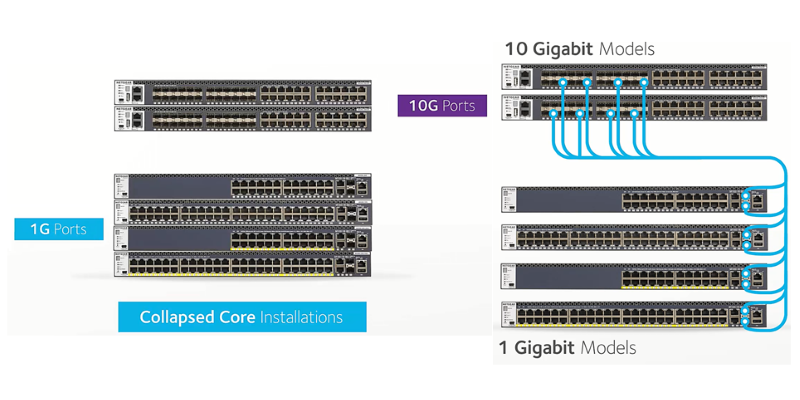 As mentioned earlier, the M4300 series can be scaled from 24x1G to 48x10G all the way up to 384 ports per stack, all while also being guaranteed to deliver nonstop forwarding, spine and leaf, edge to core connectivity for unified wired and wireless networks. 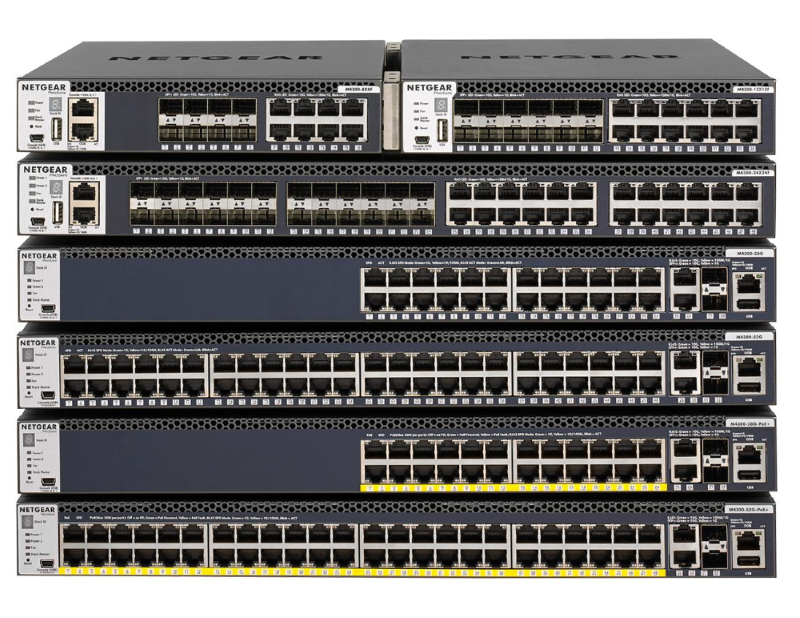 Thanks to that, network managers can have this stackable and fully managed half-width switch unit switch delivering an unstoppable operation with management unit hitless failover and absolutely no service interruption for the clients connected to the other switches within the stack.

That ultimately makes deployment and administration slightly easier. Additionally, one could even use any of the switch’s ports to do the stacking.

Tested by severing the switch’s up link, continuous forwarding did pick up practically instantly and on a constant ping only dropped one single packet. This is really a feature to praise.

Using both iSCSI (Same Subnet) and SMB (Routed Subnet) on a stack assembled with this half-width switch will have the iSCSI preforming very well, as you’d most likely expect.

Furthermore, SMB actually exceeded my expectations, as it reached near line speed over a routed subnet with little to no configuration, and that should very much differ from anyone’s experience with older switch unit / models, where you’ll most likely find yourself consistently having a hard time getting good forwarding performance (even with a switch that showcases very little port population). Ultimately, this is one other great feature delivered by the Netgear M4300-8X8F.

The unit is extremely easy to install, it accounts with a 1G and 10G virtual chassis platform with 10G stacking and PoE+ full provisioning, and it can even be scaled from 24x1G to 48x10G all the way up to 384 ports per stack. Ultimately, this switch series has incredibly network potential.

Users are guaranteed to get nonstop forwarding, spine and leaf, edge to core connectivity for unified wired and wireless networks with an unstoppable operation that also includes management unit hitless failover and absolutely no service interruption for the clients connected to the other switches within the stack.

If you’re interested in buying the Netgear M4300-8X8F Stackable Fully Managed Switch, each half-width switch unit is currently going for around $2,000. You can order yours right now, directly from Netgear’s official shopping page, which you can access via this link.