For anyone that’s passionate about running, there’s a new wearable gadget out there that can help you improve your running technique by simply tracking your running metrics during every running workout. Then, at the end of every run, you can analyze all the data of your own running statistics and understand what you can improve on. Meet the NURVV Run Insoles.

The NURVV Run Insoles are Smart Insoles that are worn by runners during each running workout to accurately track their running metrics. With these smart shoe insoles, runners can analyze and better understand all of their running data to effectively improve their running performance.

This set of smart wearable insoles work based on a unique biomechanics sensor technology, and the ingenious company behind this smart wearable tech. is NURVV, a biomechanics innovator that based their work on British science to explore a specific market within the global wearables industry.

The company’s main goal with their NURVV Run Insoles is to help around 10 million runners to improve their running technique.

Back at CES 2020, during the company’s original announcement of their smart wearable insoles, Jason Roberts, founder and CEO of NURVV stated that the “NURVV Run Insoles revolutionize how people run by accurately capturing the metrics that matter most, directly from the point of action at the foot, before using live coaching to help them improve in a simple, easy-to-understand way.”

Then, co-founder Ulrica Roberts added that the “most of the important metrics happen at the feet”, so instead of “having their running data being measured from the wrist”, runners should have it measured right from their shoes, which is where the NURVV Run Insoles’s magic happens.

Basically, the NURVV Run Insoles work like a wearable fitness tracker for your shoes, and after connected to their proprietary Smartphone App (the NURVV Run App), these smart wearable insoles provide runners with the power to understand what their bodies are truly capable of.

These smart insoles accurately capture all of a wearer’s running metrics, right from the point of action to the end of their running workouts, and during that, they sent the collected data in-real-time to the App, which analyzes the wearer’s run-data using advanced biomechanics, thus ultimately enabling athletes to get actionable insights and live in-run coaching.

Now, let’s take a more detailed look at the NURVV Run Insoles and check everything that these smart wearable insoles for runners have to offer.

Starting with the insoles actual design, the NURVV Run Insoles are simply two ultra-light insoles that easily and comfortably fit into the base of a runner’s shoes. Each sole also integrates a total of 32 high-precision sensors that are built into the sole itself, and these can capture data 1,000 per second.

Then, at the outer side of each shoe insole, there’s also a built-in GPS Tracker Unit, which is exactly what connects the insoles biomechanic sensors to a runner’s Smartphone. Just like the insoles themselves, these built-on GPS trackers are also ultra-lightweight, weighing just 0.8 oz. each. 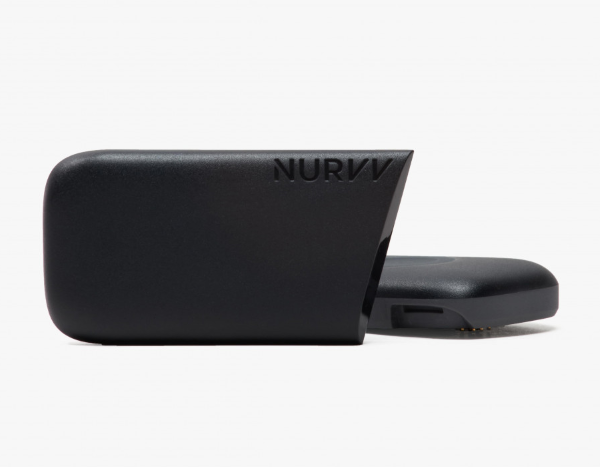 By using the two included Clip Adapters, users can ensure that their NURVV Run Insoles’ built-in GPS Tracker Units stay clipped in perfectly in place, right at the side of their shoes. 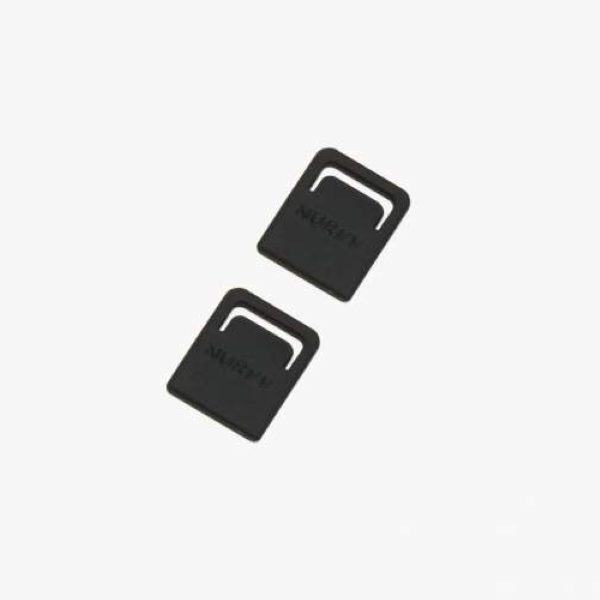 It’s also worth mentioning that the NURVV Run insoles are also rain-, mud- and puddle-proof, so you can wear them completely worry free, no matter what weather conditions you’ll face during your running workouts. 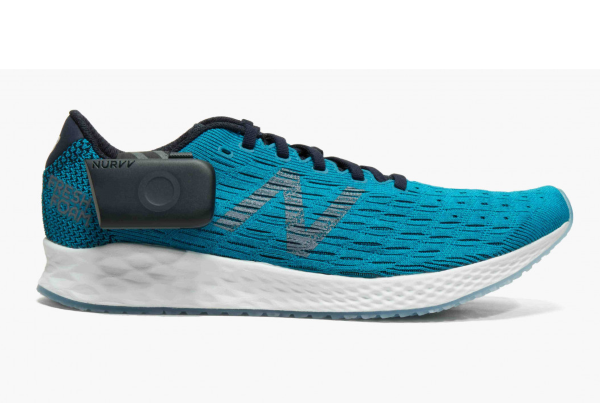 The NURVV Run Insoles are compatible with all running shoes, and runners can connect the system to IOS (12 or above as well as iPhone 6s or above), Apple Watch (Series 3 or above), Android (6.0 or above) and to ANT+ (Garmin) wearables. 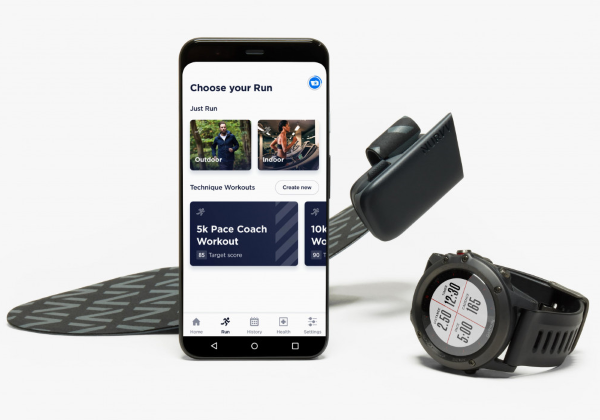 Be aware that for people that hate to go on their running workouts while carrying their Smartphone, it’s worth to mention that the NURVV Run Insoles can also be used phone-free.

The system ships together with an included proprietary Charger and USB Charging Cable, so charging the insoles’ battery life back to a full charge is quick and easy. The process only takes you a few hours. 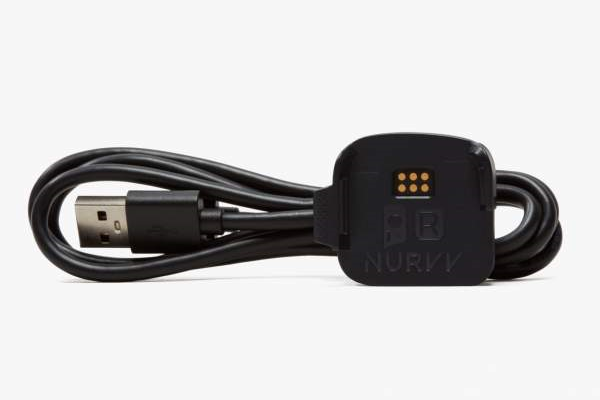 HOW DO THE NURVV RUN SMART INSOLES WORK?

To have their running metrics collected to then analyze it in order to improve their running technique, the first thing that users / runners have to do after wearing the Nurvv Run Insoles with their running shoes is a baseline run. This simply involves a quick run outdoors around a reasonably short perimeter (let’s say a 10-15 minute run around a public park).

Before leaving your running workout start-point (whether it is your home, office, etc.), the very first thing users need to do is to connect their NURVV Run Insoles to their Smartphones via the NURVV Run App.

Then, before actually going for the test-run itself, remember to roll each foot on your toes, plantar region (the central part of your foot), and your heel, just for a little bit of time to verify that the NURVV Run App is accurately detecting each and every data input.

As mentioned earlier, each NURVV Run Insole comes equipped with a total of 32 high-precision sensors, and each one of those sensors can record exactly 1,000 bits of data per second (meaning that each sensor can accurately capture data from your feet at 1,000 times per second).

This data, which includes unique running metrics such as cadence, step length, footstrike, pronation and balance, is sent to the NURVV Run Coaching App to show users a complete picture of their running technique. By using advanced biomechanics, the App then delivers simple and actionable insights as well as personalized coaching that gives runners guidance on how to improve before, during and after each run.

The App’s in-run, real-time coaching then creates gamified speed and technique workouts to help wearers run at a target pace, as well as to help them achieve a chosen finish time or ultimately, to beat a personal record with responsive audio, visual and haptic feedback.

All of the App’s real-time audio prompts (heard through your wired or wireless earbuds, which will be connected to your Smartphone) detail a runner’s step length, cadence and pace on critical splits, and that basically helps to keep runners on track to ultimately hit their goals and improve their running technique.

Check out the company’s video embedded below to see how a runner’s first experience will be when using the NURVV Run Insoles:

The NURVV Run Coaching App, which is available to download for free for both iOS and Android devices, analyzes a wearer’s running by using biomechanics to give insights and live in-run coaching, ultimately allowing users to improve their running technique to run faster and reduce injury risk.

While collecting a runner’s metrics, the App analyzes the data and coaches users on their unique and personal running metrics such as cadence, step length, footstrike, pronation and balance.

The NURVV Run Insoles and their Smartphone Companion App can be used both indoors and outdoors.

The NURVV Run Insoles are Smart Insoles that are worn by runners during each running workout to accurately track their running metrics. With these smart shoe insoles, runners can analyze and better understand all of their running data to effectively improve their running performance.

Without a doubt, this is a revolutionary wearable gadget that is guaranteed to help runners to easily and conveniently improve everything there is to improve about their running technique.

With all that said, all that there’s left to ask is… have you got the NURVV to improve your running technique? (pun totally intended).

If you’re interested in buying the NURVV Run Insoles, each pair is currently going for $300 each. Each insoles pair comes with a 1-Year Warranty and is available in a wide range of different sizes. You can order yours online right now, directly from NURVV’s official shopping page, which you can access by clicking here.

Personal Safety Wearables are small wearable gadgets that allow you to share your location, images, and audio in real-time, so your loved ones can...
Read more
Wearables