While there are many different water sports available to try out, not many can be as fun and as relaxing as Paddleboarding. This unique recreational water sport was originally born from surfing, with its roots coming from Hawaii. Paddleboarding is often seen as a hobby or pastime, as it basically consists of lying, kneeling, or in most cases, standing on a paddleboard or surfboard and simply propelling yourself through the water either by using a paddle, or alternatively, by using your hands. Still, the most common form of this sport is often referred to as Standup Paddleboarding (or SUP), as in most cases, people tend to stand up to have a better view and a better time exploring what’s around them while they’re paddleboarding. Now, if you wish that your paddleboarding exploration experience could last you a little longer so that you can better enjoy nature, consider getting yourself the Sublue Paddleboard Power Conversion Kit, and maybe even the Sublue WhiteShark Tini Triple-Engine Support Handle for underwater exploration.

Both of these products are modular water-exploration attachments that are designed to be used together with Sublue’s WhiteShark Tini, which works as an innovative and revolutionary modular underwater scooter engine that’s designed to work as an airplane jet for underwater exploration. To put it simply, both of these water-exploration devices bring a new dimension and experience to water-sports lovers and paddleboard users alike.

Then, for those passionate about underwater exploration, we have the Sublue WhiteShark Tini Triple-Engine Support Handle. This device is designed to work as a triple-powered underwater jet that works by simply combining up to three WhiteShark Tini Engines together to propel explorers of all ages alike underwater, offering you a kick of adrenaline when exploring the underwater world by giving you a faster and more thrilling underwater ride.

With either of these modular water-exploration gadgets, you can take your above-water and underwater exploration adventures to a whole new level.

Now, let’s have a slightly more detailed look at both of Sublue’s new modular water-exploration devices and see how each of them is designed to work.

Starting with the Sublue Paddleboard Power Conversion Kit, as said before, this a modular paddleboard adapter that’s designed to work as an above-water propellant.

By doing so, you can then quickly reach a favorable area for paddleboarding further out into sea at a speed up to 7km/h, all without paddling. 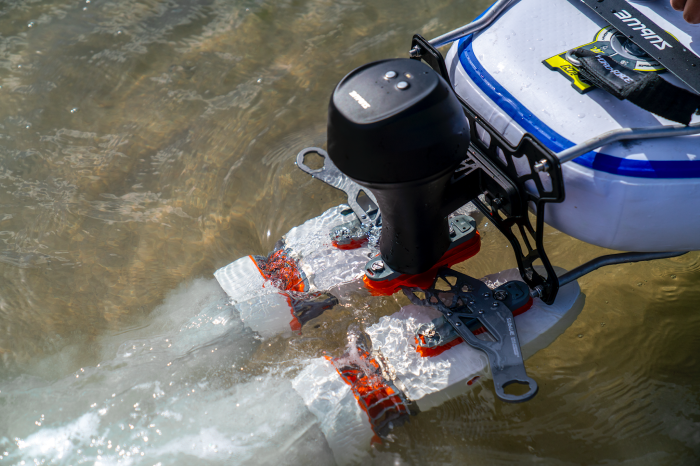 For the kit’s installation, the whole setup process is also fairly easy to follow, as it is only a matter of tightening up a few bolts and screws to first attach the kit to your Standup Paddleboard, and then the same to affix either one or two of Sublue’s renowned WhiteShark Tini Underwater Scooter Engines to the kit. 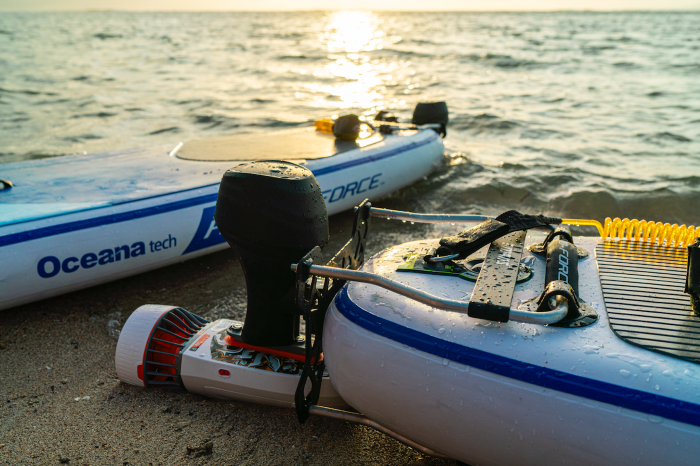 Another great feature about this modular paddleboard adapter is that the Paddleboard Power Conversion Kit is also compatible with around 99% of paddleboards that you can currently find available on the market.

Moreover, since this modular paddleboard conversion kit also comes equipped with an internal battery for powering up its one or two WhiteShark Tini Engines (which you’ll be attaching to it to convert your Standup Paddleboard into an electric-powered paddleboard), you’re offered around 45 minutes of battery life to enjoy using your SUP as an above-water propellant. 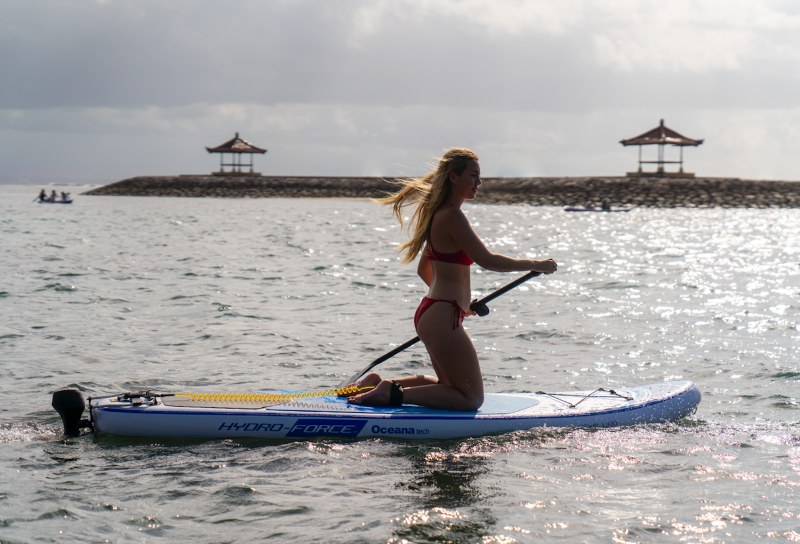 And if we’re being honest, not only are those 45 minutes a lot of time for you to enjoy quality time paddleboarding, but its also a great functionality to have in terms of the time that you’d otherwise spend commuting either closing into or going away from the shore, thus saving you some precious energy for when you really need it to explore the aquatic world around you.

Obviously, the same also goes for whenever some potential bad weather kicks in, as having the chance to use your standard SUP as an electric-powered paddleboard is a great safety functionality to have, as that ultimately allows you to get to the shore much faster than just by paddling (as you normally would).

Working as a great accessory for longer paddleboarding trips, the Paddleboard Power Conversion Kit is already available for pre-ordering, with each set currently discounted from its normal price of $229, now going for just $179 each (saves you $50).

Then, for those who are passionate about underwater exploration, we have the Sublue WhiteShark Tini Triple-Engine Support Handle, which is an accessory that’s designed to work as a triple-powered underwater jet that works by simply combining up to three of Sublue’s WhiteShark Tini Modular Underwater Scooter Engines together to propel users underwater.

With the WhiteShark Tini Triple-Engine Support Handle, users can reach speeds of up to 2.4m/s, with an operational depth of up to 20 meters.

It’s also worth noting that the Sublue WhiteShark Tini Triple-Engine Support Handle is reasonably lightweight, weighing just 17.63 lbs. (8 kg), and the entire device also features a very durable design throughout its whole body, which is all thanks to its ultra-sturdy metal frame.

Moreover, its interchangeable design makes it fairly easy for users to afix either one, two, or even three of Sublue’s WhiteShark Tini Underwater Scooter Engines to this triple-powered underwater jet. That said, setting up the whole unit is fairly easy, even for less “tech-savvy” users.

For controlling the engine’s speed-settings, users can attach that same (already-mentioned) Stable Wireless Power System to their WhiteShark Tini Triple-Engine Support Handle, for which this Control System works based on just One Button that allows you to control the engines’ speed between two different speed-settings.

For the unit’s run-time, when having a total of three (x3) WhiteShark Tini Engines combined, users can get up to 150 minutes of use for playing around with this awesome triple-powered underwater jet.

Perfect for those who love underwater exploration, the Sublue WhiteShark Tini Triple-Engine Support Handle was designed to offer you a kick of adrenaline when exploring the underwater world, giving you a faster and more thrilling underwater ride.

You can find it already available for pre-ordering on Sublue’s official shopping page, going for just $129 each. Alternatively, you can also get it from Amazon, if you prefer. Lastly, you’ll also be able to find it available for purchasing at some of your local retail stores.

Finally, and on a side note, we at GadgetGram would also like to mention that the company as a few different extra inflatable accessories available for purchasing that can be used together with the Paddleboard Power Conversion Kit and the WhiteShark Tini Triple-Engine Support Handle, along with Sublue’s WhiteShark Tini Engines of course.

In total, you can come up with 12 different combinations to explore the pool or seas. That said, for families looking to purchase the complete kit, know that you’ll be able to combine all of these water-exploration gadgets for up to six people.

So, as a few examples of those combinations, kids can enjoy an engine-powered inflatable kickboard by attaching one WhiteShark Tini Engine to a WhiteShark Tini Inflatable Kickboard (goes for $99 per unit).

Meanwhile, adults can easily maneuver themselves inside the water and float side-by-side with their children to monitor their water-exploration fun simply by using a WhiteShark Tini attached together to a WhiteShark Tini Floater (sells for $59 each).

Last but not least, by equipping their Smartphone with Sublue’s Smart Waterproof Phone Case H1, parents can record all of their children’s underwater-exploration moments in true-color and with Smart AI Color Correction Technology. 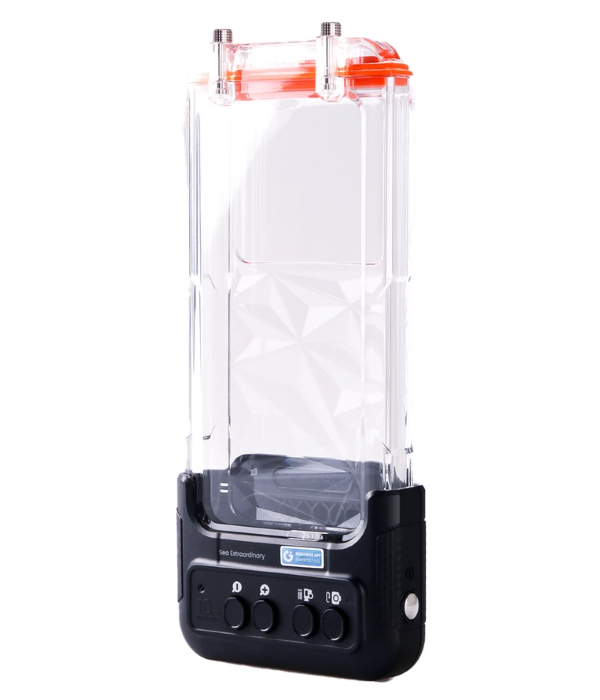 With all these awesome accessories, all of your family’s water-exploration options are truly endless.

The Freehands Light Up Running Gloves are battery-illuminated gloves designed for running in low-light conditions, coming equipped with a built-in presence LED light that feature 3 different finger-touch light settings. By simply pressing the built-in Power Button at the back-side of each glove, users can swap the Light Settings for their Light Up Running Gloves, which can be set between Rapid Blinking, Slow Blinking, and Steady Light (always-on). All in all, these battery-power illuminated running gloves are great for keeping both drives and cyclists alike aware of your presence when running in low-light conditions.
Read more
Home Gadgets

The Solo Stove Yukon is a large portable fire pit that can fit logs up to 22" long, featuring a Double-Walled Design powered by a 360° Signature Airflow Technology which offers superior airflow and a prime secondary burn that respectively helps to eliminate smoke and create flames up to 4 ft. tall, along with an Ash Pan that catches loose ash to prevent clogging. Thanks to its clever Double-Walled Design and its innovative 360° Signature Airflow Technology, the Yukon is capable of quickly achieving an ultra-efficient burn that rapidly brings your kindling and chunkwood to brilliant flames in just a matter of minutes. All in all, this outdoors fire pit offers you some very convenient features that make it easy to use, fairly easy to clean, and great for keeping all of your friends and family nice and toasty while gathered around its roaring flames.
Read more
Outdoor

The Rumpl Original Puffy Blanket is a portable all-season outdoors puffy blanket that features a Synthetic Insulation made of 100% recycled plastic materials that's stuffed into an ultra-durable Ripstop Shell that's both water-resistant and stain-resistant. Not only that, but this sleek, cozy, and ultra-durable outdoors puffy blanket also comes equipped with Paracord Corner Loops for sticking it into the ground or to integrate it with a hammock as an underquilt, as well as with a sturdy Cape Clip that allows you to wear this blanket completely hands-free.
Read more
Outdoor

The Grizzly Drifter Carryall Cooler Bag is a super versatile portable cooler bag that features a tough fabric exterior, a 32-liter capacity, insulated walls that keep coolness in, and a waterproof food-safe TPU lining that keeps moisture from wet gear or condensation from leaking out. Not only that, but there's also a large interior pocket integrated right into the wall material that can be used to keep any wet items properly separated from dry goods. In sum, the Grizzly Drifter Carryall Cooler Bag makes packing up food and beverages for all of your adventures easier than ever before. With it, you can keep your things dry, cool, and perfectly organized.
Read more