Ever since the COVID-19 pandemic originally hit the world by storm, several companies and business owners saw themselves with no other option but to ask their employees to work from home. However, many of those people didn’t really have an appropriate PC Setup to work from their home-offices, as many business workers and tech. workers worldwide were used to working from their company’s headquarters. Furthermore, while some of those employees still have access to their personal laptop (or even to a business laptop), that’s not really the same as working on a desktop PC, as those tend to be reasonably more powerful than most traditional business laptops nowadays. Now, if this is your case and you’re still working from home, then you should consider upgrading your home-office’s PC Setup by getting an all-in-one solution like the MSI Modern AM242TP All-In-One PC.

Moreover, this all-in-one PC can also be used as a second monitor, all without priorly having to boot up its system.

Last but not least, the MSI Modern AM242TP also comes together with an external MSI 1080p FHD Webcam that’s designed to bring its users the best video quality possible, which ultimately makes this all-in-one PC ready for Business Video Calls straight out of the box.

Now, let’s have a more detailed look at it and check out everything that this high-end all-in-one PC has to offer its users.

In addition, the MSI Modern AM242TP All-in-One PC also features a very simple and truly minimalist design that ultimately gives it a stylish and ultra-modern look, thus allowing it to easily blend in within any desk space and match any home-office furniture.

Furthermore, this all-in-one PC system also supports the installation of any Standard VESA Mount (75 x 75 mm models), or alternatively, you can instead use it with MSI’s very own MAG MT81 VESA Monitor Arm. 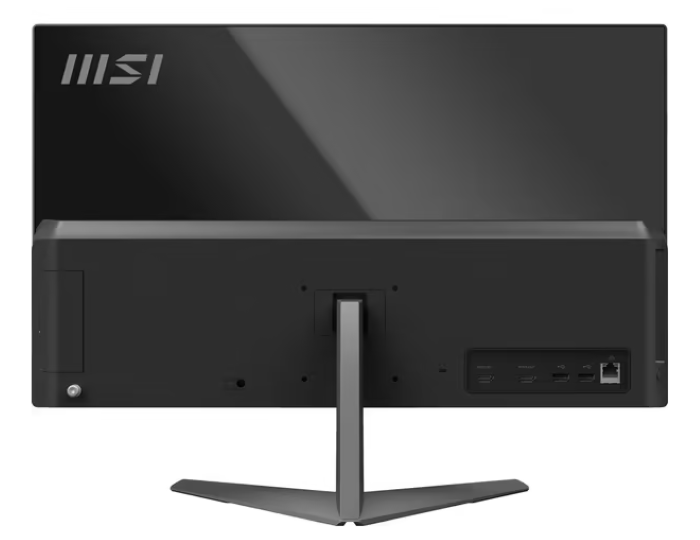 It’s also worth nothing that the system’s 23.8″ IPS Display Screen is designed to work as an Anti-Glare Panel against any potentially reflected light or glare (which can be very fatiguing to a user’s eyes), thus basically reducing the contrast, colors and sharpness of the display. This can greatly help to reduce eyestrain when using the system’s screen for longer periods of time.

In addition, the system’s screen also runs the company’s proprietary MSI Anti-Flicker technology, which eliminates screen-flickering and effectively reduces eye fatigue caused by prolonged use time, all of which ultimately helps to enhance your productivity.

Moreover, the system’s 23.8″ IPS Display Screen can also be set to work in a special “Less Blue Light Mode”, which triggers the system’s display screen to filter-out a user’s visual exposure to blue light during daily use.

By enabling this special Screen Mode, users can have a more comfortable viewing experience for the system’s screen, especially when working for long periods of time.

Finally, the system’s 23.8″ IPS Display Screen also comes powered by MSI’s Instant Display Technology, which allows you to use the PC’s Screen as a monitor without priorly having to boot up its system. 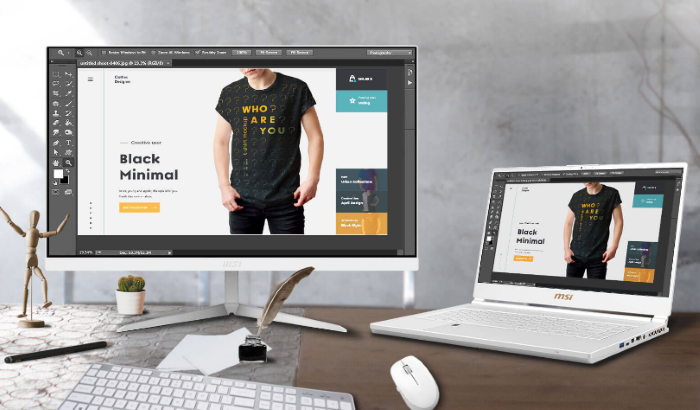 On that note, keep in mind that as soon as an external device (such as a laptop, for example) is connected to the system’s dedicated HDMI Input port, its screen will be immediately turned on to either Mirror or Expand the other device’s screen functions.

On top of that, the MSI Modern AM242TP also supports the use of a second monitor (for expanding the system’s own screen functions) via its dedicated HDMI Output port.

For the system’s audio, the MSI Modern AM242TP also integrates a set of two (x2) 3W Realtek ALC233 HD Audio Speakers that allow users to listen to music or even participate on a Voice Call while working with this all-in-one PC.

That ultimately makes this all-in-one PC ready for Business Video Calls straight out of the box. Note that since this is an external Webcam, you can also choose to remove it if you ever need more privacy.

Then, for its GPU, the system uses an Intel Iris Xe Graphics Card.

Then, to keep all of its components running at a low temperature level, this all-in-one PC also comes equipped with a Silent PRO Cooling System, which is partly composed of a Server Grade Thermal Module that’s responsible for handling the cooling of the system’s many different components, such as its 256GB SSD, its Intel Core i5-1135G7 CPU, and its two (x2) 8GB DDR4 RAM sticks.

To be a little more specific, all of the system’s most important hardware components are installed on the top side of the device’s body, which helps to ensure the system’s has a reliable air flow so that that the warm air produced by those components can easily move out of the MSI Modern AM242TP’s enclosure.

This basically helps to ensure that the system’s temperature stays perfectly under control for a cool, stable, and silent operation, which ultimately results in an extended life cycle for the system as a whole.

Finally, it’s also worth noting that all comes running smoothly on the Windows 10 Pro Operative System, which already comes pre-installed.

Now, we’ll have a look at the system’s entire interface, meaning all of its input and output ports for different connectivity options, all of which can be found at the back-side of the system’s 23.8″ IPS Display Screen. 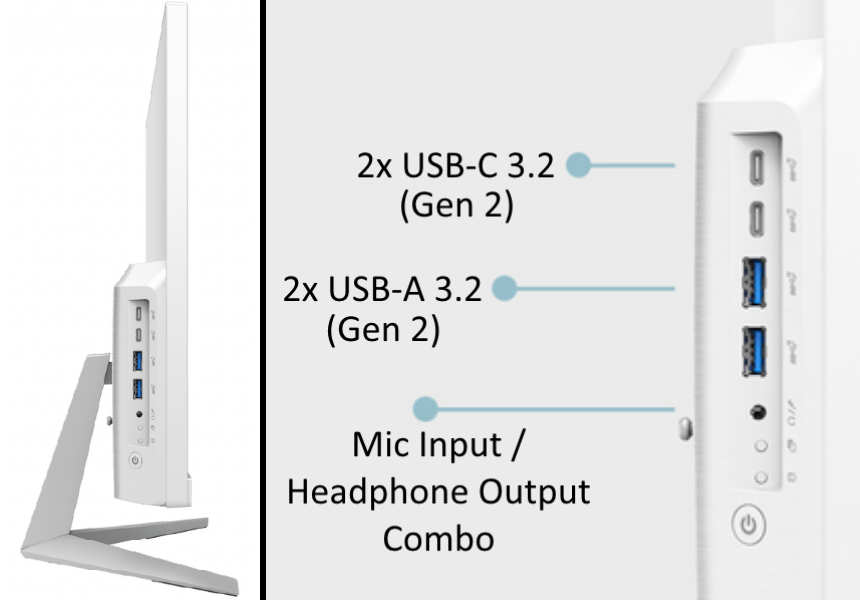 Not only can these USB-C and USB-A ports be used with USB-flash drives, external HDDs and external SSDs, but also feature support to Super Charger – meaning Windows’ resident program – which makes a system capable of revising power supply mode of your USB port for recharging any USB-enabled devices (such as a Smartphone or tablet).

Then, at the back-left side of the unit, we also have an integrated Kensington Lock, a HDMI Input Port, followed by a HDMI Output port, two (x2) more USB-A 2.0 ports, and a RJ45 Ethernet / LAN Port for wired internet connectivity. 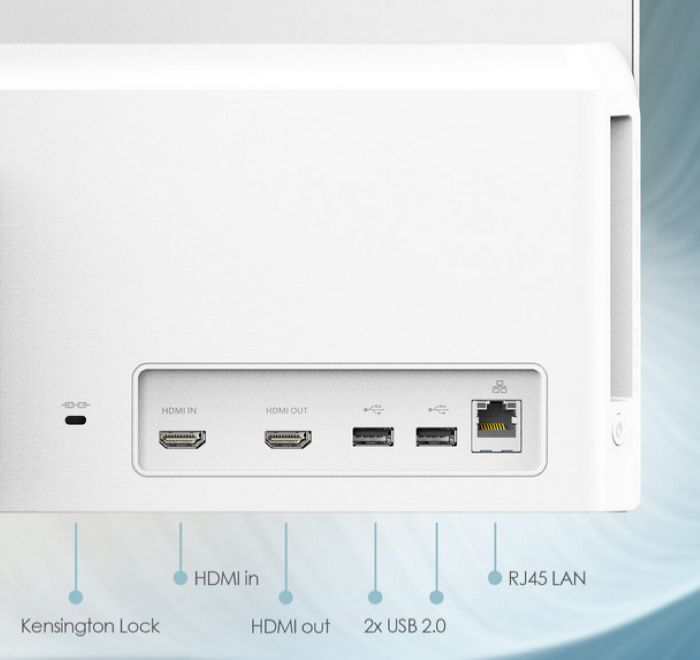 Close to the top-side and still and the back, we also have one more USB-A 2.0 port, which is respectively meant to be used for the system’s included external MSI 1080p FHD Webcam. 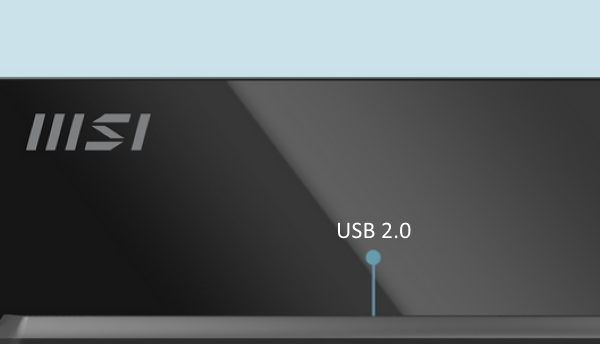 Lastly, at the back-right side of the system’s monitor, we also have a 2.5′ MSI Storage Rapid Upgrade Design, which basically allows for an easy maintenance of the system, thus helping you to conveniently and very easily upgrade or maintain its 2.5′ storage.

And sitting just below that 2.5′ MSI Storage Slot, there’s also an integrated 5-Way Navigator Button that provides users with an easy OSD (On-Screen Display) Control, meaning that you can use this 5-Way Button to easily navigate the system’s Display Screen Menu.

For the system’s connectivity, this all-in-one PC features both Bluetooth 5.1 Connectivity as well as WiFi 6 Connectivity (supporting (802.11ax) at 2.4Gbps as well as Dual Band for both 2.4GHz and 5GHz).

In addition, the system’s already-mentioned RJ45 Ethernet / LAN Port can be used for a wired internet connection, supporting speeds of 10Mbit, 100Mbit, and 1000Mbit.

Moreover, this all-in-one PC can also be used as a second monitor, all without priorly having to boot up its system.

Last but not least, the MSI Modern AM242TP also comes together with an external MSI 1080p FHD Webcam that’s designed to bring its users the best video quality possible, which ultimately makes this all-in-one PC ready for Business Video Calls straight out of the box.

To put it simply, this all-in-one PC literally comes with everything any business worker would need to be able to work from home in the most productive way possible.

If you’re interested in purchasing it, each unit is currently going for $1,049.99, and each purchase also comes accompanied by a 1-Year Manufacturer Warranty. You can order yours online right now, directly from MSI’s official US website.