For most business workers nowadays, having a portable encrypted storage solution for personal use is a must. By using an encrypted storage device, not only can you protect the confidential information that’s contained in any business-related files from being access and read by random people in your office, but most importantly, you’ll also be able to protect those files from potential datas leaks and from data theft, thus ultimately helping to prevent potential damaging consequences for your business and/or company. Another reason to have an encrypted storage solution for storing your own files is due to the fact that having your business files just stored on a digital cloud alone is not enough anymore, because if you lose either internet access or access to that cloud service for some unexpected reason, than you’ll consequently lose access to those files, at least temporarily until either connection is restored. So, if you’re looking for a reliable encrypted storage solution that can offer you the highest level of data security to date, then the iStorage diskAshur M2 is one of the best choices that you can currently go with.

The iStorage diskAshur M2 is a pin-authenticated and hardware-encrypted SSD that utilizes real-time military-grade AES-XTS 256-bit hardware encryption, and also incorporates a Common Criteria EAL5+ ready secure microprocessor which employs built-in physical protection mechanisms against external tamper and bypass physical attacks, while also featuring both USB-C and USB-A Connectivity, ultra-fast backwards compatible USB 3.2 data transfer speeds of up to 370MB/s for reading and writing, both a Read-Only Mode and a Read & Write Mode, plus a Bootable function to boot directly from it, along with other advanced security functions such as Auto-Lock, a Self-Destruct PIN function, a Drive Reset function, and the possibility of Whitelisting on different networks.

Incorporating the best level of security functionalities that are currently available both in advanced encryption as well as in security technology, this pin-authenticated and hardware-encrypted SSD has all the security perks you need to keep all of your files and data safely protected from any potential danger.

Now, let’s have a more detailed look at the iStorage diskAshur M2 and talk about everything that this pin-authenticated and hardware-encrypted SSD has to offer you.

Starting with the iStorage diskAshur M2’s size, this external SSD comes at a fairly compact size, measuring just 4.17 inches long by 1.77 inches wide by 0.47 inches thick (106 x 45 x 12 mm) without its protective sleeve equipped, and the device is also rather lightweight, weighing just 2.29 oz. (65 g) by itself.

When having its protective sleeve equipped, the device still keeps a fairly portable and compact form, becoming only slightly longer in size, for which it then measures just 4.37 inches long (111 mm), and weighs a total of 3.03 oz. (86 g).

The device features a minimalist, modern and professional-looking design, coming in a Black Matte color with a smooth finish.

Not only that, but this pin-authenticated and hardware-encrypted SSD also features an extremely durable construction, with its body / housing being completely made of hard-anodized and ruggedised extruded aluminum.

The device’s sturdy aluminum body is also rated to be crush-proof, with the unit being capable of withstanding the weight of a 2.7 ton vehicle, as well as rated to be shock-proof, as the device is also capable of surviving drops from a height of up to 13 ft. (4 m) high onto a concrete surface.

On top of that, the device is also certified to have a IP68 Waterproof Rating when having it equipped with its protective sleeve, which makes this hardware-encrypted SSD both water- and dust-resistant, meaning that it is certified to withstand dust, dirt, sand, as well as to survive being submerged in 4.92 ft. (1.5 m) of water for a maximum of 30 minutes.

Moving on to the device’s interface. Since this is a pin-authenticated and hardware-encrypted SSD, the iStorage diskAshur M2 also comes equipped with a wear-resistant onboard keypad, which comes covered with a layer of polymer coating that protects its keys and also hides all of its key-usage to avoid tipping off a potential hacker to commonly used keys. 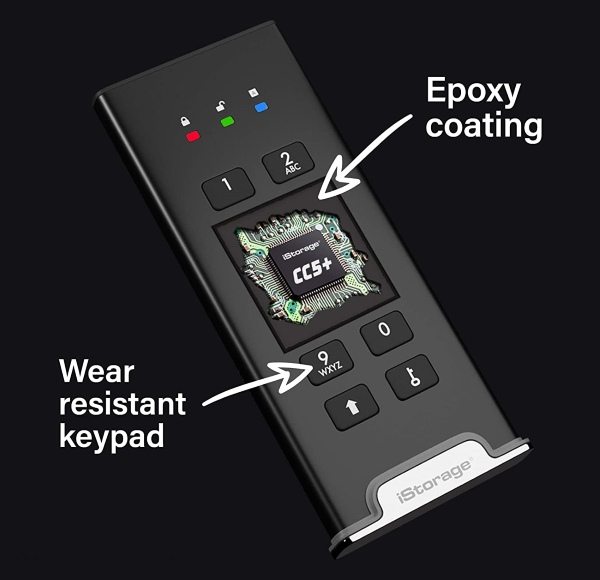 In addition, all of the iStorage diskAshur M2’s internal components also come completely covered by a layer of super tough epoxy resin, which is virtually impossible to remove without causing permanent damage to the components.

Lastly, the device is also designed to be tamper evident, thus making 100% obvious to its user if the unit has been pried open and tampered with.

Finally, above its wear-resistant onboard keypad, there’s also a set of three (x3) built-in Status LED Lights that inform users about the SSD’s current situation during its use. 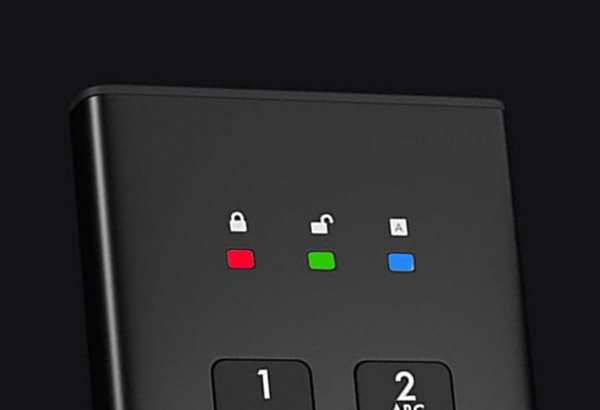 Going from left to right, we have a Standby/Lock Red Light LED, a User Mode / Unlocked Green Light Led, and a Admin Mode Blue Light Led.

HOW TO USE / OPERATE THE DEVICE?

To unlock the diskAshur M2, users first have to press the Key Button from the device’s onboard keypad. The Red, Green, and Blue LEDs will flash together, and then the Red LED will blink. After that, users simply need to enter their User PIN within 10 seconds – the factory default PIN is set to 1-1-2-2-3-3-4-4. Nevertheless, users can still configure their own unique 7-15-digit User PIN.

After entering their User PIN, users simply need to press the Key Button once again. The Red LED will then light up, switching to the Green LED after a couple of seconds. Once that’s done, users have 30 seconds to connect their iStorage diskAshur M2 to their device (PC or laptop).

For its connectivity method, as said before, the iStorage diskAshur M2 features both USB-C Connectivity as well as USB-A Connectivity. 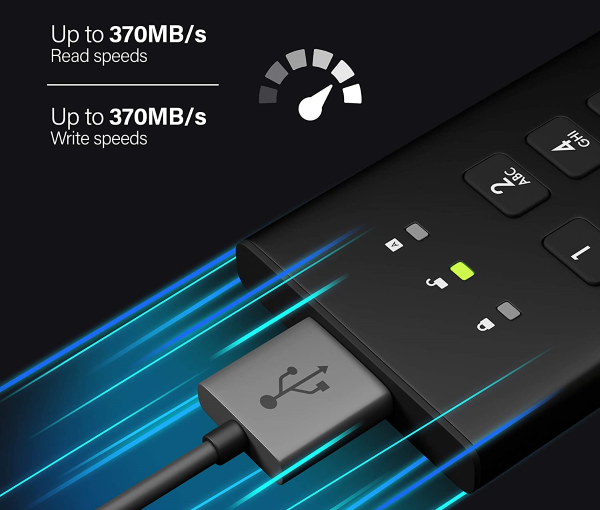 Not only that, but the device also boasts ultra-fast backwards compatible USB 3.2 data transfer speeds that can go up to 370MB/s for both reading and writing.

When it comes to this SSD’s storage capacity, know that the iStorage diskAshur M2 is currently available in five (x5) different storage capacity options, which are: 120GB, 240GB, 500GB, 1TB, and 2TB.

It’s also worth noting that the iStorage diskAshur M2 is also both OS and platform independent, and no software is required to use it, meaning that this pin-authenticated and hardware-encrypted SSD will work on any device that features a USB-C or USB-A port, being perfectly compatible with any Operate System and/or platform, whether that’s MS Windows, macOS, Linux, Android, Chrome, Thin Clients, Zero Clients, Embedded Systems, Citrix and VMware.

The diskAshur M2 features both independent User and Admin PINs, thus allowing Admin users to configure their own unique 7-15-digit Admin PIN, along with a secondary 7-15-digit User PIN. 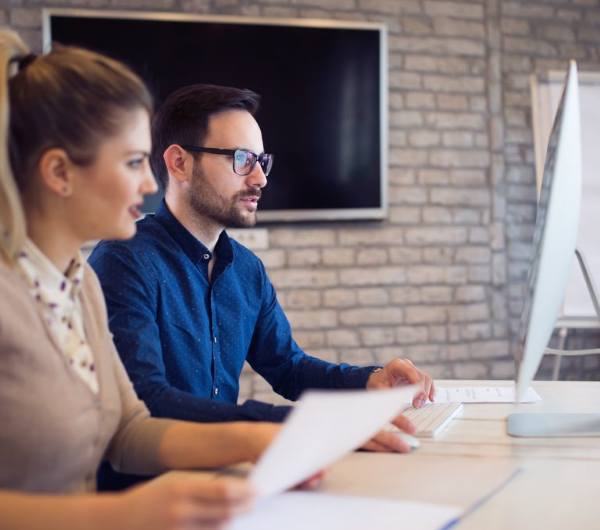 That ultimately makes this pin-authenticated and hardware-encrypted SSD perfect for corporate and government deployment. If a “guest” user (meaning secondary user) forgets their User PIN, the device can still be unlocked via the Admin PIN, and the Admin User can then allow his/her guest user to set a new User PIN.

Additionally, the Admin User can also set a restriction policy for the device’s User PIN. This includes setting the minimum length of the PIN, as well as requiring the input of one or more “Special Characters”. The “Special Character” functions as “SHIFT + digit”.

The diskAshur M2 also features a One-time User Recovery PIN (only configurable by the Admin user) that basically works as a single-use recovery function, which is extremely useful in situations where a guest user has forgotten their own personal User PIN, ultimately allowing them to still unlock the device once with that One-Time User Recovery PIN and set a new User PIN for themselves.

On top of everything both the Admin User as well as any guest user can also configure the diskAshur M2 as a Read Only (meaning data-write protected) device. If configured by the Admin, the feature cannot be modified or disabled by a standard user, which basically allows the Admin to pre-provision the SSD with pre-loaded content as a read-only device for any potential guest user.

Alternatively, an Admin user can choose to have their iStorage diskAshur M2 SSD working in Dual Mode, meaning having it enabled for both data-reading and data-writing operations.

Another great feature offered by the diskAshur M2 is that this pin-authenticated and hardware-encrypted SSD also boasts a Bootable functionality.

This is great for specific cases where Admin users require the device to remain unlocked during USB port re-enumeration, such as during a reboot process or passing the device through a virtual machine, as it allows users to install an OS on their diskAshur M2 and boot directly from it.

The diskAshur M2 also features an Auto-Lock function that automatically locks the SSD when having it unplugged from its host computer or when power to its current USB port is turned Off.

This function can also be set to automatically lock when having the device’s interaction window (on your PC’s user interface) idle after a predetermined length of time.

Admin users can also pre-program their diskAshur M2 with a Self-Destruct PIN, which once entered, the data, its encryption key, and all of its currently configured Admin and User PINs are deleted and rendered as lost forever.

The diskAshur M2 also integrates a Drive Reset function, which once enabled, deletes its encryption key, all Admin and User PINs, and also renders all data as lost forever.

The device can then be redeployed as you did the first time you’ve used it, for which it will then randomly generate a new encrypted encryption key. This process can be repeated as many times as required.

Last of all, this pin-authenticated and hardware-encrypted SSD can also be configured with a unique VID/PID and internal/external serial number with a barcode, thus allowing for an easy integration into standard end-point management software (white-listing) if it’s ever necessary for the Admin user to meet internal corporate requirements.

The iStorage diskAshur M2 is a pin-authenticated and hardware-encrypted SSD that utilizes real-time military-grade AES-XTS 256-bit hardware encryption, and also incorporates a Common Criteria EAL5+ ready secure microprocessor which employs built-in physical protection mechanisms against external tamper and bypass physical attacks, while also featuring both USB-C and USB-A Connectivity, ultra-fast backwards compatible USB 3.2 data transfer speeds of up to 370MB/s for reading and writing, both a Read-Only Mode and a Read & Write Mode, plus a Bootable function to boot directly from it, along with other advanced security functions such as Auto-Lock, a Self-Destruct PIN function, a Drive Reset function, and the possibility of Whitelisting on different networks.

All in all, the diskAshur M2 offers everything business workers could ever wish for in a portable SSD. Not only is it compact and lightweight, but its wide range of data-encryption and device-security functionalities make it one of the best portable encrypted storage solutions that you can currently find available on the market.

If you’re interested in buying it, know that prices vary from $169 for a 120GB-capacity SSD up to $559 for a 2TB-capacity SSD. You can order yours online right now, either directly from iStorage’s official USA shopping page, or alternatively, you can get it from Amazon, if you’d prefer.