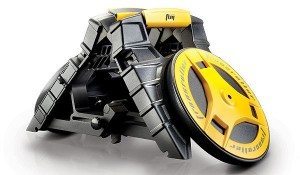 The Transroller is for handling heavy, cumbersome loads. For example, you can move things such as sheet materials in a safe manner and with significantly less effort than traditional methods. The clamping feature, essentially a gravity-activated clamp on wheels, allows the Transroller to secure its load in place.

The Transroller was designed by a firm in Canada, Alto Design. It’s relatively small but holds up to a half-a-ton thanks to its large wheels, which spearate to stay balanced as weight increases.

This is the perfect companion for the weekend warrior mover, or for the serious moving business. It’s lateral handle allows you to tote it with ease as well as assisting in picking up heavy loads.  It’s so lightweight too, it defys the laws of physics….super feathery and yet this thing could carry a small elephant.  The Transroller comes in 4 colors (Blue, Green, Red and Yellow), and the optional swivel feature gives you added versatility of a cart or platform, (with 2 Transrollers together), allowing you to move even heavier loads with no loss of manoeuverability.  ($300, www.Transroller.ca).