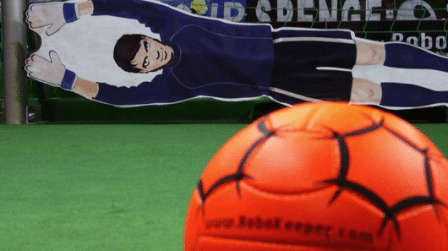 Cameras capture the ball and its movements and direct the goalie to make an interception. But don’t get your hopes up. RoboKeeper’s technology drives a super fast and nearly impossible robot to score on.

Since the Soccer World Championship in 2006, Prof Dr Michael ten Hompel, leader of the Fraunhofer-Institut für Materialfluss und Logistik (IML) in Dortmund, and his team got the idea to build the world’s best goalie.

They say the RoboKeeper can outperform every goal-keeper in the Champions League (as long as the teams play on his turf). But he has an unfair advantage. Two cameras recognize the complete ballistic curve of the ball and transmit its position to an image processing computer every 1/50 second.

Combining the images from each camera produces a 3D position of the ball. Data is then sent to the motor control driving a high-tech and extremely robust aircraft gearbox which moves the RoboKeeper to the exact point of impact in under half a second. This high-performance technology enables the ‘keeper’ to deflect just about any ball and keep his record intact.

Robokeeper can be hired out for events or training camps. There are some interesting offsprings of Robokeeper currently under development as well, including a Wii controller version which lets you direct the ‘keeper. (www.robokeeper.com)

Cost to Build an iPhone 4

iPad HD to launch in September